A Pittsburgh premiere by David Mamet puts ethnic tension in the foreground. 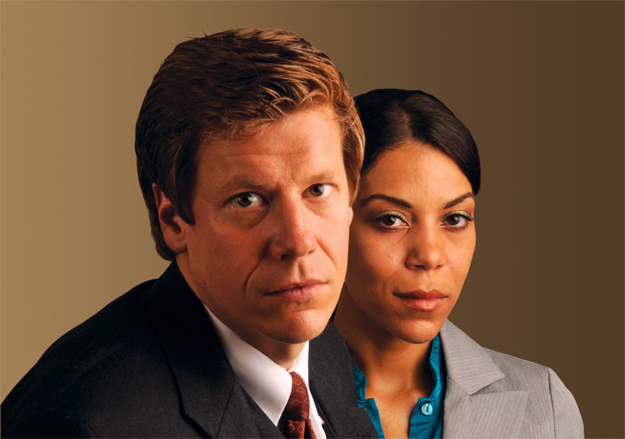 The defendant is a wealthy white man. The plaintiff is an African-American woman. The crime is unforgivable. And that’s just the start.

The basic premise is intense, and with a name like Race, you know it isn’t going to be pretty. But leave it to legendary playwright David Mamet to sucker-punch such a sensitive cultural nerve. Mamet is one of the great Broadway bad-boys, a gutsy Chicagoan whose plays involve petty crime (American Buffalo), real estate corruption (Glengarry Glen Ross), the personal politics of student and professor (Oleanna), and sexual perversity in Chicago (Sexual Perversity in Chicago).

And the biggest surprise of all: The company to bring this 2009 Broadway sensation to the Steel City is none other than Pittsburgh Irish & Classical Theatre.

“I saw the original production on Broadway,” says Andrew Paul, PICT’s artistic director. “What I really enjoyed about it was that the audience was almost 50 percent white and 50 percent black.

“I think that all responsible theaters need to respond to their entire community. The black people and the white people were all laughing at the same jokes, and these were some pretty non-politically correct jokes.”

In general, PICT selects a more traditional season: This spring and summer have seen productions of Shakespeare’s Antony & Cleopatra and Oscar Wilde’s The Importance of Being Earnest. But while Paul likes to fiddle with classics, he offers newer fare as well. Race is neither Irish nor classical, but Paul feels a responsibility to cover hot-button issues like ethnic tension. Instead of sticking to dead white men, Paul feels strongly about integrating Pittsburgh artists and audiences, which are often divided by demographics.

“I think the theater is a forum for ideas,” Paul says. “The biggest theme we can talk about right now is race. The play is also about class, about gender politics and, in some ways, is an indictment of our legal system. Also, the play is hilarious. It’s a drama, there’s no doubt about that. But it’s a comic drama.”

Bottom line: “I think all of the plays [PICT produces] have a strong ensemble aesthetic. In that way, Race fits right in.”

One of the greatest challenges to producing a Mamet play is Mamet himself, who is famous for his strong opinions and outspoken demeanor. Mamet shocked everyone by declaring himself a neoconservative and avid Sarah Palin supporter, a complete turnaround from his pro-union progressive politics in years past. But worldview aside, Mamet is even particular about how plays are written and how actors act.

“I really enjoy Mamet,” says Michael Fuller, who plays Charles Strickland, the accused rapist. “The script came across as sort of harsh, but I set that aside. I really believe it’s supposed to churn up questions and discussion, and not just strong
opinions.”

Actors are drawn to Mamet for his hyper-realistic dialogue, cerebral monologues and often foul language. (He is credited with introducing the “F-bomb” to mainstream American drama.) Fuller, a 41-year-old Ben Avon resident, recently performed in barebones production Glengarry Glen Ross, which was hailed as one of the best Pittsburgh shows of 2009.

“I don’t get to talk as much,” Fuller says about playing Strickland. “In Mamet, that’s almost a unique challenge. There’s such a rhythm to the dialogue. You speak the character. The character does not exist outside of the play. I would like Strickland to be a bit of a stretch. I would like to achieve something that isn’t just Michael walking around.”

While Race expresses some hostility toward the legal system, the play is not considered a legal procedural. Unlike such dramas as A Few Good Men and Twelve Angry Jurors, Race is more interested in personality than jurisprudence.

“I don’t have a lot of experience with attorneys,” says Fuller with a laugh. “I just know what I know from TV.”

David Mamet always pushes the envelope, and Pittsburghers love him for it. Here is a selected timeline of Mamet’s relationship with local performing arts organizations.

1979: The brand-new City Theatre produces Sexual Perversity in Chicago at the University of Pittsburgh. The controversial play is only five years old.

1989, 1999 & 2006: City Theatre, Pitt Rep and the Playhouse REP produce their respective versions of American Buffalo, a comedy about petty thieves scheming in a junk shop. With its tough-guy characters and blue-collar angst, Buffalo remains a Pittsburgh favorite.

1991: Speed-the-Plow, about Hollywood sleazebags, is staged at the Public.

2004: The short-lived Cloven Hoof Productions stages double-feature of Sexual Perversity in Chicago and All Men Are Whores: An Inquiry, cerebral comedies about mating rituals in the Swinging Seventies.

This article appears in the September 2011 issue of Pittsburgh Magazine.
Categories: Arts & Entertainment