In one shopping center, reflections of retail change. 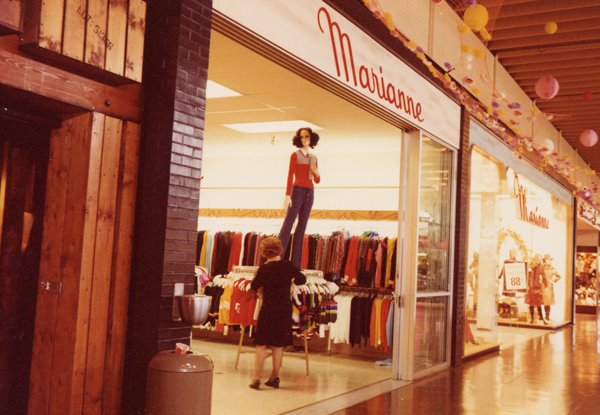 For a 4-year-old, it was perfect one-stop shopping. First we'd wander into Heintzelman's, a specialty foods store, and Mrs. Heintzelman would give me a slice of the featured cheese of the day. And then another. And another.

Next came Alioto's Produce. Sam Alioto would come bounding out of the back of the store with a fistful of fresh strawberries or plums or cherry tomatoes, grinning and handing them to me, then looming over me to make sure I finished every one. He was like an Olive Garden commercial: "Eat, Teddy! Eat!"

At Wlodek Select Meats, I'd get a taste of something deli-like before being led by my mother into the barber shop, where — in the very back, in a room with dueling mirrors that showed 100 reflections of me receding into the distance — a genial gentleman named Mr. Larocca would cut my hair. On the rare occasions when I didn't cry, he'd let me pick out a lollipop.

By the time we made it to the lunch counter at Woolworth's, I was just about full (though, coincidentally, never too full for a grilled-cheese sandwich and french fries).

Funny thing about these memories, my very earliest, dredged up from the first part of the 1970s: They sound like the classic American Main Street experience, straight from Norman Rockwell or Frank Capra. But they weren't; they all unfolded on McKnight Road in the North Hills, within the confines of Northway Mall.

It's hard to believe, but there were days within living memory when the shoppers of Pittsburgh went to malls primarily to get the stuff they actually needed, not just the stuff they desired.

Consider Northway Mall, known today as The Shoppes at Northway. Built by developers who expanded an early strip mall on McKnight Road, it was reconfigured in 1962 to become Western Pennsylvania’s first indoor mall. That meant something different then.

The mezzanine level was doctors’ and dentists’ offices, and on the second floor – more like the malls of today – you could find a sprawling Joseph Horne department store, which seemed, at least to a little boy, to have an inordinate amount of kitchenware. But the most extraordinary thing about Northway Mall then, the thing I remember most vividly to this day, was its anchor store, located where the recently closed Borders Books & Music sat: an A&P. A full-on supermarket! In a mall!

In short, Northway Mall in those days was, for the most part, a bastion of necessities and staples – meat and potatoes, haircuts and banking and health care and women's dresses and gray men’s suits. It was Main Street and the downtown shops, all enclosed in one convenient package.

Things are different today. At Ross Park Mall, you can leave your car with the valet parking guy while you pick up a $500 pair of jeans or a $2,500 Macbook Pro. At Century III, you can enjoy an indoor jump at “EuroBungy.” At The Mall at Robinson, actual tourists – bused over from nearby airport hotels with coupon books – roam the floors. At the Galleria of Mt. Lebanon, with the swipe of a credit card, you can own a $4,000 Restoration Hardware distressed leather sectional sofa. And while you’re doing these things, you can eat dozens of different meals, pick up thousands of types of candy, join mall walkers, attend community events, flirt with potential dates.

The average Pittsburgh mall has become a shiny, focus-grouped temple of consumerism, with the finest of mainstream merchandise sitting upon pedestals and under glass — metaphorically and, often, literally. The mall today is the First Church of the Next Big Thing. It is a place where how you feel while you’re shopping is just as important as the purchase itself.

Yet occasionally, as I walk through these towers of 2012 retail nirvana, I pause and think of Northway Mall and its long history, which accompanied me during my years  growing up in Pittsburgh and my two decades away from it.

I think of the floor-to-ceiling cage of exotic birds on the upper level, so hypnotizing that it was always surrounded by children with wide eyes whose mothers appreciated the momentary break from chaos. I think of the Herman's World of Sporting Goods where I got my Wilson Ron Guidry-model baseball mitt for Pony League.

The week before I left for college in 1986, Ross Park Mall opened its doors for the first time. Abruptly, a generation of North Hills teenagers shifted its attention there, and Northway Mall became something different. Today, I'm back in the area after 20 years of just visiting, and I still go to the mall at least once a month with my boys for something you can't get at a chain-restaurant food court: Mamma Lucia pizza, arguably the best in the vicinity. And as I walk the floors, emptier than they used to be, I see far more than what is there now. I see layers — the stores that accompanied me through my life. They taught me — for better and for worse — how to be a late-20th-century consumer, what to want, what to buy, what to desire.

And as I stand in Ross Park Mall, with its surround-you shininess and the carefully calibrated shopping environments of places like Abercrombie and the Apple Store, I can't help but wonder: If they were resurrected for just a day, what would Mrs. Heintzelman and Sam Alioto (who, you might say, had the original apple store in a North Hills mall) think?

I'm not quite sure what I'd tell them.

Photos courtesy of Malls of America