CHUTZ-POW!, a comic series based on stories of survivors of the Holocaust, brings together inspiration and education for future generations. Volume 3 will be released this month with an accompanying art exhibition. 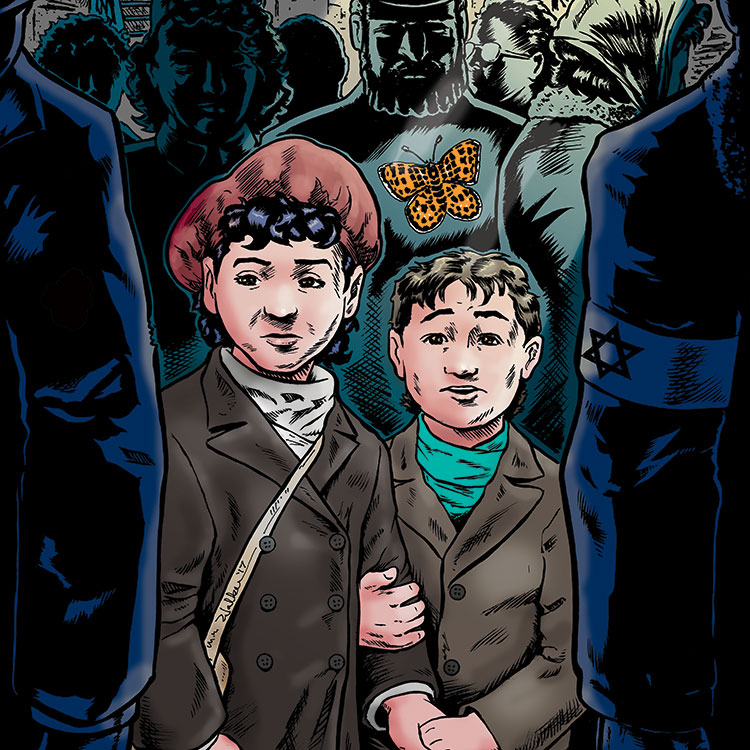 When we think of superheroes, figures like Superman, Spiderman, Wonder Woman and Batman come to mind. But, thanks to an initiative of the Holocaust Center of Pittsburgh, real people could also be included in that category. “CHUTZ-POW!,” a series of comic books designed by a team of artists and writers throughout Pittsburgh, features real-life stories of Holocaust survivors; the third volume is being released this month.

“The survivors trust us with their stories,” says Zachary Zafris, former Holocaust Center development manager and past editor of “CHUTZ-POW!”

The series name is inspired by the Yiddish word “chutzpah,” meaning boldness. Volume 3 focuses on Holocaust survivors who were children during that time and later settled in Pittsburgh.

“This is more than just a project — this is a piece of them that they are telling,” Zafris says.

The idea for the series stemmed from a committee that was formed at the Holocaust Center to use comics art as part of efforts to revamp Holocaust education. That committee featured Wayne Wise, lead project writer of “CHUTZ-POW!,” and Joe Wos, founder of Toonseum, the Downtown museum dedicated to cartoon art. Committee members eventually decided to produce a comic book, plus an accompanying traveling art exhibit. The first art component debuted at the Three Rivers Arts Festival in 2014; since then, the project has expended so much that Marcel Walker, current “CHUTZ-POW!” editor, lead artist and book designer, has taken on a more permanent role at the Holocaust Center, becoming the project coordinator to oversee future volumes. 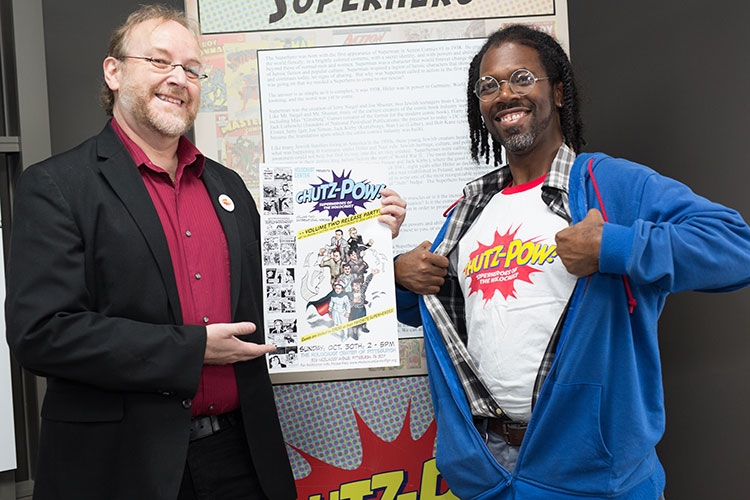 “Typically, the works that are used in classrooms when talking about the Holocaust weren’t created with the educational components in mind,” Walker says, referencing works such as “The Diary of Anne Frank” and “Night” by Elie Wiesel. “‘CHUTZ-POW!’ is different because it was created with the understanding that they will be utilized in classroom settings.”
Walker notes that while comic books are stereotyped as being for children, they are actually literature and primarily purchased by adults. “CHUTZ-POW!” itself is designed to be accessible to everyone middle-school aged and older.

​Zafris says that choosing which stories to include is difficult, because everyone’s narrative is powerful and meaningful.
“Ultimately, we decided to use a mix of different stories throughout the Holocaust, because people think of the camp experience, but there’s a lot of other experiences that make up a survivor,” he says.

The art exhibit at the Holocaust Center, “CHUTZ-POW! The Art of Resistance,” opens on Feb. 11 (running through late May). The opening will celebrate the release of Volume 3 as well as a teacher’s resource guide to continue the educational goals of the series.

An accompanying exhibit at the American Jewish Museum at the Jewish Community Center in Squirrel Hill, “CHUTZ-POW! Superheroes of the Holocaust: Volume III, The Young Survivors,” runs through April 20.

While the comic tells stories of events past, Walker says the importance of the series is in its relevance to the present.

“It’s a cautionary tale of what can happen when average people turn away from their neighbors when the latter faces persecution, and when the persecuted are disavowed based on geography, religion, politics, etc.,” he says. “At the same time, CHUTZ-POW! shows us amazing examples of average people answering the call to heroism by accepting a social responsibility to aid others, sometimes at the cost of their own lives. This is happening every day, all over the world, including on our own shores.”

Walker hopes the comics will make readers aware of the world around them and inspire them to act like the superheroes they’re reading about. There is a quote on the back of the first volume by Holocaust survivor Fritz Ottenheimer, who is featured in that issue, that embodies CHUTZ-POW!’s ultimate goals:

“When you’re acting as a superman, you’re teaching your children to be supermen,” Fritz says.

Holocaust Center Director Lauren Bairnsfather says the educational component allows for students to connect reading the comic book with meeting actual survivors who are featured, something that is going to be harder in the coming years.

“At the heart of the challenge moving forward is that we’re going to lose them,” Bairnsfather says. “We have to be looking toward the future and thinking of ways that we can build those connections without those incredible people.”