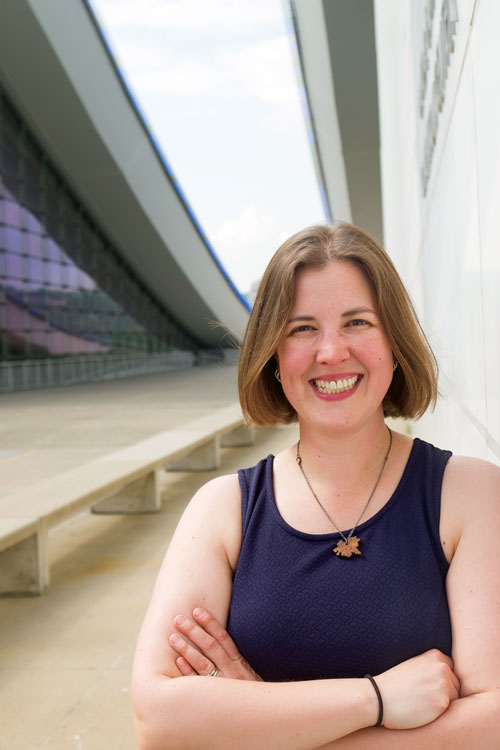 In September 2003, the new David L. Lawrence Convention Center opened to the public, instantly earning the title as the “largest green building in the world.”

Seventy-five percent of the nearly 1.5-million-square-foot building could be lit by just sunlight, and the center saved 5 million gallons of water annually by recycling 50 percent of its water for use in toilets. Two months later, it became the first convention center to earn a LEED certification for its energy-saving and environmentally friendly design and construction.

Across town, a young engineer named Aurora Sharrard was paying attention. She had recently arrived in Pittsburgh to enroll in a graduate program in civil and environmental engineering at Carnegie Mellon University. One of her professors at CMU was Rebecca Flora, the founding executive director of Green Building Alliance, a group that advocates for sustainable buildings and had played a major role in the Convention Center’s design and construction. Pittsburgh and Flora were at the forefront of the green-building trend, and Sharrard, who previously had worked as an engineer in New Orleans, was hooked.

“I always had an environmental ethos, but when I was in undergrad, the environmental program focused on pollution treatment — not prevention,” she says. “That was before the focus [of the field] flipped to sustainability.”

Upon earning her master’s degree and Ph.D. at CMU, Sharrard joined Flora and GBA in 2007; over the next nine years, she has overseen collaborations with private companies to bring green products to market and deliver sustainable renovations and buildings.

While GBA once had to seek out construction projects, today, building owners, architects, engineers and contractors come to them for input. In 2015, Sharrad became GBA’s executive director, another stage for an organization that prides itself on evolution.

Recognizing that not all buildings, especially older ones, would ever be able to achieve the strict LEED certification, Sharrard co-created the Pittsburgh 2030 District, an effort in Downtown and Oakland to reduce energy usage, water consumption and transportation emissions 50 percent by 2030. Instead of giving buildings a list of things they’re required to do, the 2030 District sets the goal and lets building owners and managers decide how to get there.

“People don’t like being told what to do,” Sharrard says, “and we can’t pretend we have all the answers of how to get from A to B.”

In May, GBA announced that the Pittsburgh 2030 District was ahead of its 2015 targets and now had nearly 70 percent of all building square footage in Downtown and Oakland committed to reaching the goals.

“Pittsburghers are very conscious about making sure that there are very strong investments now,” Sharrard says, “to make sure that we have a plan in the future for social, economic and environmental needs — the triple bottom line.”

This article appears in the July 2016 issue of Pittsburgh Magazine.
Categories: Community Feature