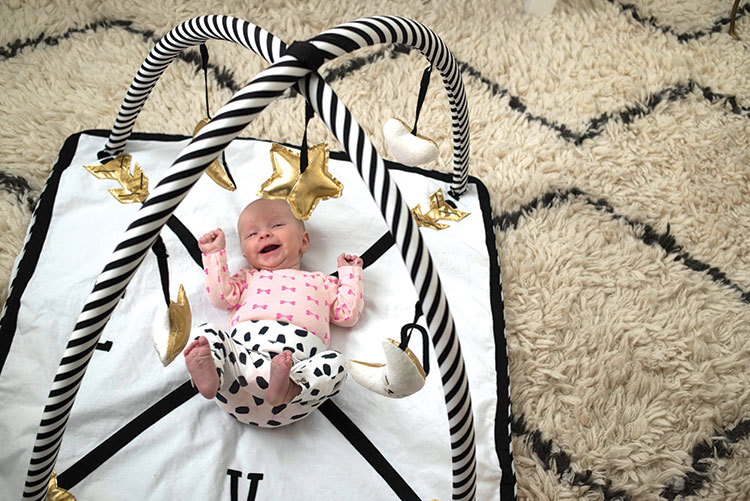 When it comes to designing nurseries, playtime is over.

“We are absolutely seeing more unique nurseries,” says Beth Williams, managing editor for ProjectNursery.com, a site dedicated to offering inspiration and resources for nursery design. “Parents are realizing just how much time they will spend in the nursery and want to create a space where they feel relaxed and happy, too, which results in more sophisticated designs and carefully curated nurseries that don’t rely strictly on matchy-matchy baby decor.” 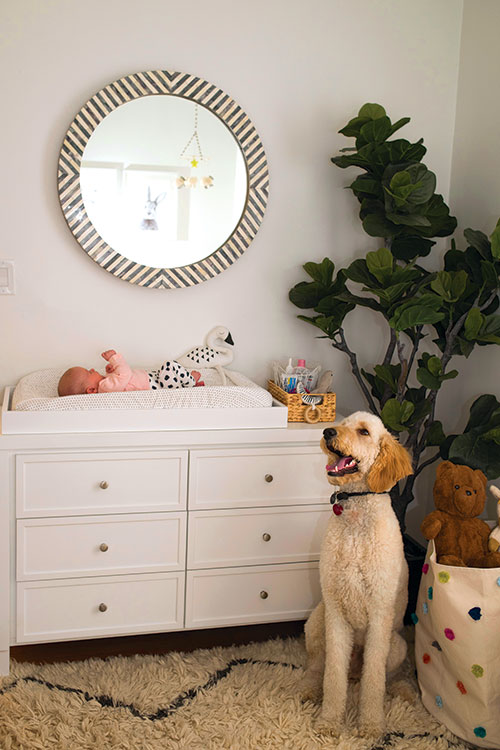 Textile designer Savannah Hayes of Highland Park used custom artwork and vintage pieces in the room she designed for her daughter, Lola. 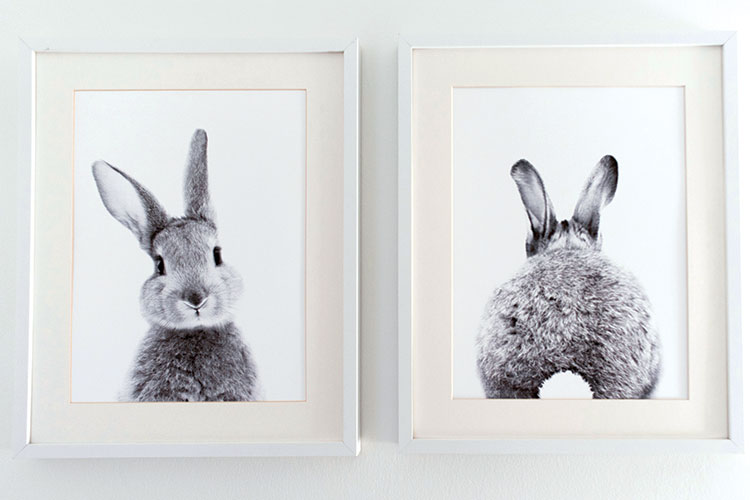 As more parents delay having children to focus longer on their careers, many find themselves in a position to spend a little more on nurseries, says Sherri Blum, owner of Carlisle, Pa.-based Jack and Jill Interiors. Her firm caters to celebrity parents such as Buddy Valastro (the Cake Boss) and Jodie Sweetin as well as clients in cities nationwide, including Pittsburgh. Parents are putting more thought into the design rather than defaulting to pastels, cartoon characters and gender-specific themes, she says.

“You will love your baby more than you love anyone else in the world,” Blum says. “It is one of the most wonderful things that will happen in your life. Why not celebrate it?”
Parents today also aren’t afraid to look to unconventional sources for inspiration, designers say.

“The sky’s the limit for nurseries these days,” Williams says. “Parents are getting super-creative with themes. We just recently had a user upload a David Bowie-themed nursery.” 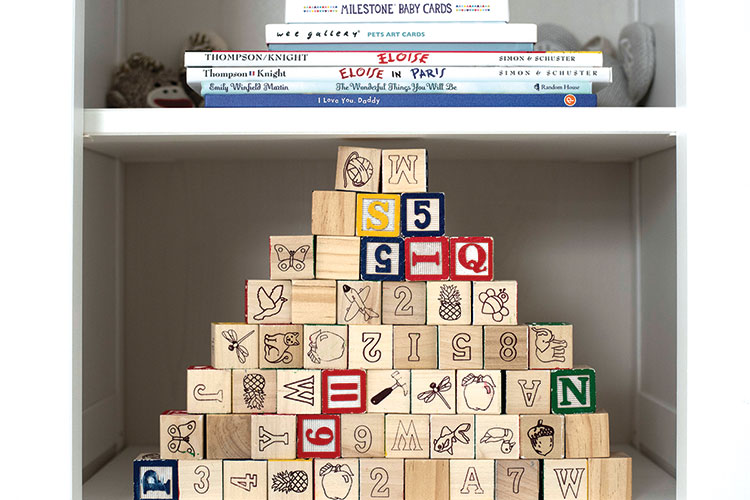 The lack of selection that met her taste inspired Hayes to add baby blankets to her line of pillows, fabric and more. 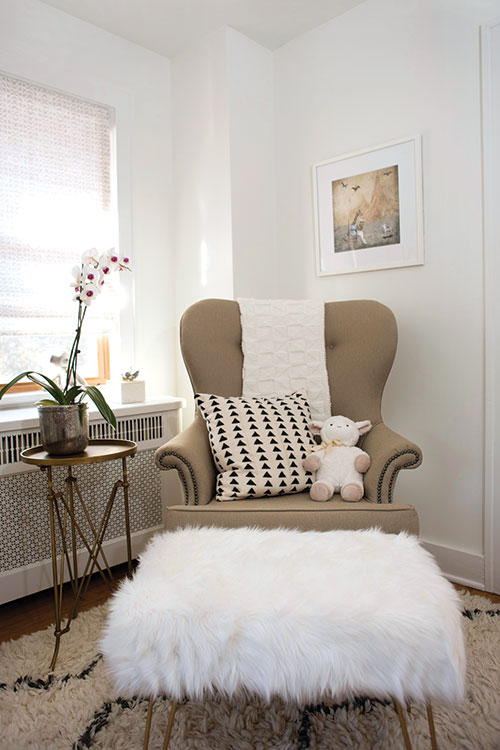 Current trends include geometric patterns used in a variety of textures, Southwestern charm with arrows and teepees, and what Blum calls “rustic chic” with an emphasis on the outdoors and woodland creatures.

Blum also has fulfilled requests for gender-reveal rooms, for which she obtains the gender directly from the couple’s doctor, then works behind closed doors in the home to design a nursery. The process can take weeks; during that time parents must resist temptation to peek, and workers are under strict instruction never to leave the room with so much as a speck of paint on them.

One of Blum’s favorite reveals resulted in a royal-prince theme for a family in New Jersey. The room, rich in creams, greys and blues, is inviting yet lavish with ornate furnishings, lush draperies and posh bedding. Such luxury, Blum says, always is in style.

Natalie and Simon Arias, of Seven Fields, are the parents of Sienna Capri, 17 months; they opted for formality with whimsical touches when they worked with Blum to create their nursery. Natalie set out to design the room herself but says she quickly was underwhelmed at the selection of children’s decor she found. 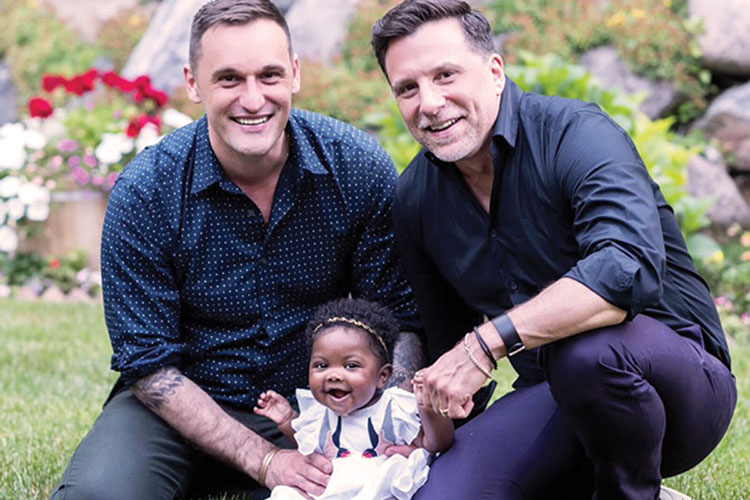 Stan Adamik and Jason Charney asked family members to provide heirloom pieces their daughter, Elona, could keep in her room so she would be empowered by their love surrounding her. 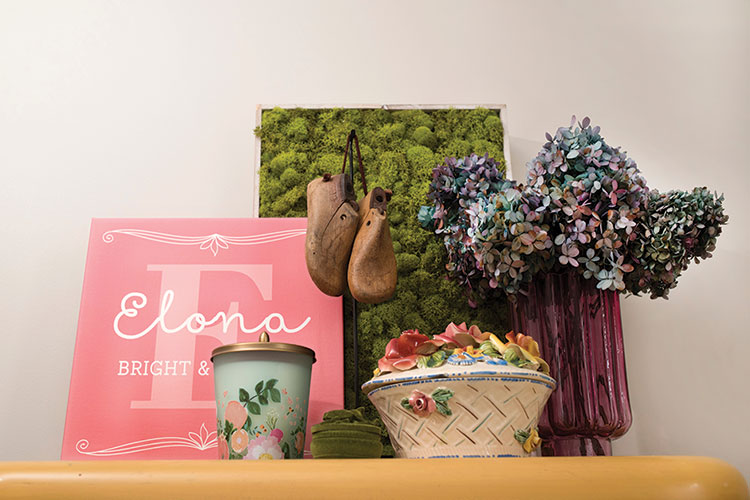 “Some of it is just cheesy, and I didn’t want a theme. I’m not a theme person,” she says. “I wanted the nursery to match the rest of my house and not be overly girly or something she was going to grow out of.”

The cream and pale purples of Sienna’s room flow seamlessly into the greys, beiges and whites in the rest of the home. While her aesthetic is primarily neutral and understated, Natalie does have a soft spot for sparkle, which she incorporated into the nursery by hanging a crystal chandelier and painting one wall with a shimmery glitter paint.

“We did it on a wall that doesn’t reflect the light as much as the others,” she says. “At certain times of day, you can’t really tell. It’s very subtle.”

Personal touches add warmth and character to any baby’s room, designers say. Textile designer Savannah Hayes of Highland Park used selections from her new line of baby blankets as well as custom artwork and vintage pieces in the room she designed for her daughter, Lola, 3 months.

“When I first started designing the nursery, I knew we were going to keep it pretty geometric with lots of different textures, and I couldn’t really find any baby blankets that weren’t giraffes and monkeys,” says Hayes, who launched her online shop a year ago with full-size blankets, decorative pillows, marble coasters and fabric by the yard. 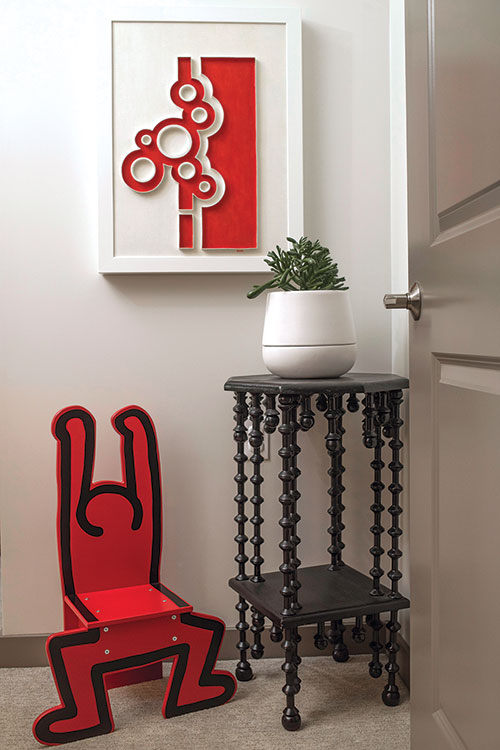 The lack of selection prompted Hayes to add baby blankets to her eponymous line — a collection of six, each with its own eye-catching pattern and muted, calm colors. Their texture is weightier than a typical, thin swaddling blanket, and their 30-by-40-inch size makes them ideal for spreading out on the floor during playtime or bringing along for outdoor picnics.

Hayes says the key to creating the ideal nursery is patience and finding the right resources. Her inspiration started with the rug, a cream shag with thin black zigzags found at West Elm at Bakery Square. She introduced more texture with a Mongolian fur stool she found on Etsy; its brass hairpin legs match an Urban Outfitters side table she already owned. They rest near an 1890s chair scored at Brimfield Antique Flea Market outside of Boston that’s been repurposed and covered in linen. Other furniture pieces, including an IKEA bookshelf, Pottery Barn crib and an aptly named “Savanna” dresser from JCPenney, all are white.

“They relate to one another, but they’re not identical,” Hayes says. “It’s not a set. Even if you are doing a set, that’s fine if you’re able to incorporate some quirky aspects.”

Hayes added touches from Pehr Designs, including the cotton canvas Pom Pom storage bins and felted wool Counting Sheep mobile. More personal accessories are in the form of artwork, including Hayes’ abstract creations and prints of a fluffy bunny found on Etsy. 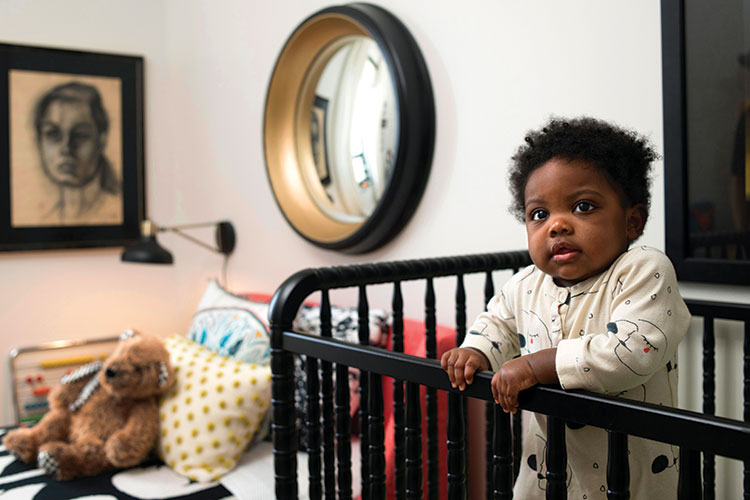 “Create an environment that’s stimulating and really interesting for them, and fill it with things you love as the parent,” he says. 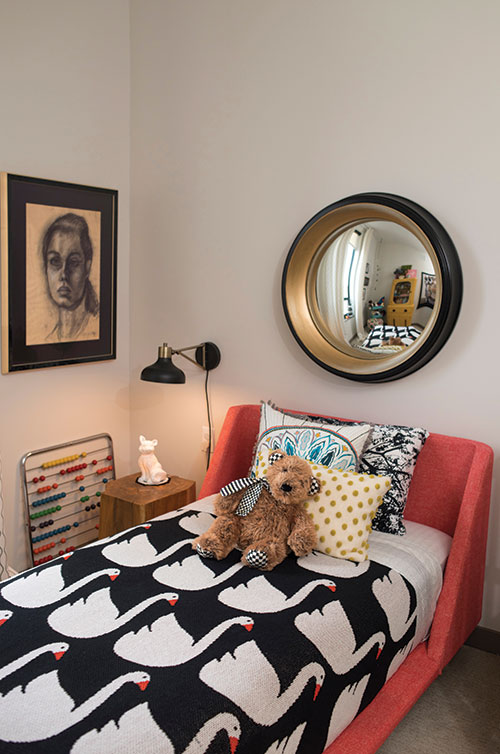 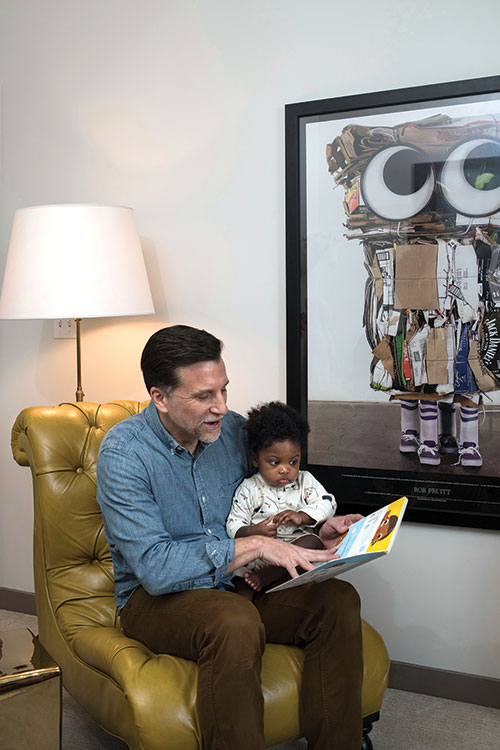 Adamik says the room he and Charney have created for their daughter is meant to transition her into her teen years.

Adamik wanted to create an eclectic space filled with items that make Elona feel empowered by the love of her family: Both he and Charney asked family members to provide heirloom pieces Elona could keep in her room as she grows. They received a carved jewelry box in the shape of a Swiss chalet from Charney’s mother and a porcelain bowl from Adamik’s grandmother.

A Heywood-Wakefield cabinet with oversized hardware and green tufted chair round create a vintage edge and simultaneously work with more modern pieces, including a Pop Art-style chair from the Carnegie Museum of Art gift shop. Elona’s mobile is a thin wire framework holding green, chartreuse and orange butterflies that Charney created.

​Adamik and Charney made choices with the goal of creating a space that can grow along with Elona.

“This will be able to transition into her teens,” Adamik says. “It’s important to think in those terms.”

Rachel Weaver LaBar is a longtime Pittsburgh-area journalist who’s written about everything from school board meetings to Broadway performers. She was born and raised in the South Hills, studied at Point Park University and lives in Pleasant Hills with her husband and their daughter.