Make it a Raw Night with Bricolage's Hunter Gatherers

A dinner party that swiftly spirals out of control, Hunter Gatherers is not for the tame of heart. 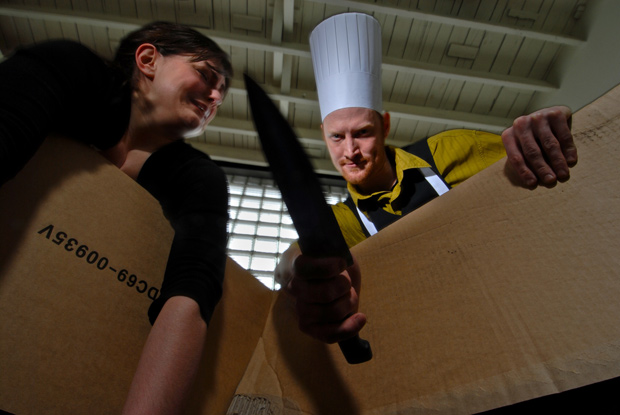 The beautiful thing about theater companies like Bricolage Production Co. is their willingness to do work that would make other theaters shudder. Risky, bold, daring—even controversial—work has a home with companies like this one, where little is impossible and nothing is taboo.

The beautiful thing about Bricolage in particular is the talent and vision to succeed with such material, where many other companies would flounder.

It takes a special kind of theatrical madness to conquer a work like Peter Sinn Nachtrieb’s sizzling Hunter Gatherers. That most steadfast of settings—the dinner party—becomes the grounds for sex, violence, partial insanity, revelation and blood sacrifice of several varieties. It is, of course, a comedy. In a safer context, Hunter Gatherers would be a comedy of manners with subtle implication and unspoken desire hinting at human nature; from the mind of Nachtrieb, suggestion and innuendo are replaced with furious, almost primal abandon.

Which is a fancy way of saying that this is a fantastic show—probably the best I’ve seen in years here in Pittsburgh.

A quartet of high school buddies reunite for a yearly get-together at the home of the infinitely passionate Richard and the smiling, meek Pam, an odd couple seemingly held together by Richard’s insistence and little else. When their pals—free spirit Wendy and sad-sack doctor Tom—arrive, it takes little more than a glass of wine to bring things crashing down. Of course, a meek lamb named Carl has already met his match, but things were going swimmingly then.

The show is immaculately cast with born hunters Wendy and Richard expending superhuman energy and inconceivable mental gymnastics over their repressed counterparts. ‘Burgh newcomer Jonathan Visser turns Richard into a tribal whirlwind, hopping from one mad truth to another effortlessly and energetically. Tressa Glover’s tame Pam may be among the gatherers, but it’s really her show, and the other three are in a psychotic orbit around her at all times.

It goes without saying that Hunter Gatherers is not for the tame of heart (and especially not for children), but to truly take in this show, a bit more is required.

Before going to see Hunter Gatherers—and you absolutely must go—I need to strongly recommend that you eat first. Go to Hyde Park Steakhouse and order a huge portion of something rare. A T-bone, maybe. Just not lamb.

Walk over the bridge. Breathe the cool spring air. Take it all in. And when you feel you’re in tune with Pittsburgh, full and happy, it is now time to have a seat and watch this show.

Afterward, go around the corner to August Henry’s City Saloon and have a few drinks while discussing what just happened and what it meant, and how they manage to clean up all the lamb juice, blood and Chex Mix every night.

Director Jeffrey Carpenter and his crew have put together one of the must-see shows of this or any year, and it’s a calling card for Bricolage—a notice that they’ve firmly entered the discussion as one of the best companies in town.

This article appears in the April 2011 issue of After Dark.
Categories: After Dark