Madness and Mayhem in the ScareHouse Basement 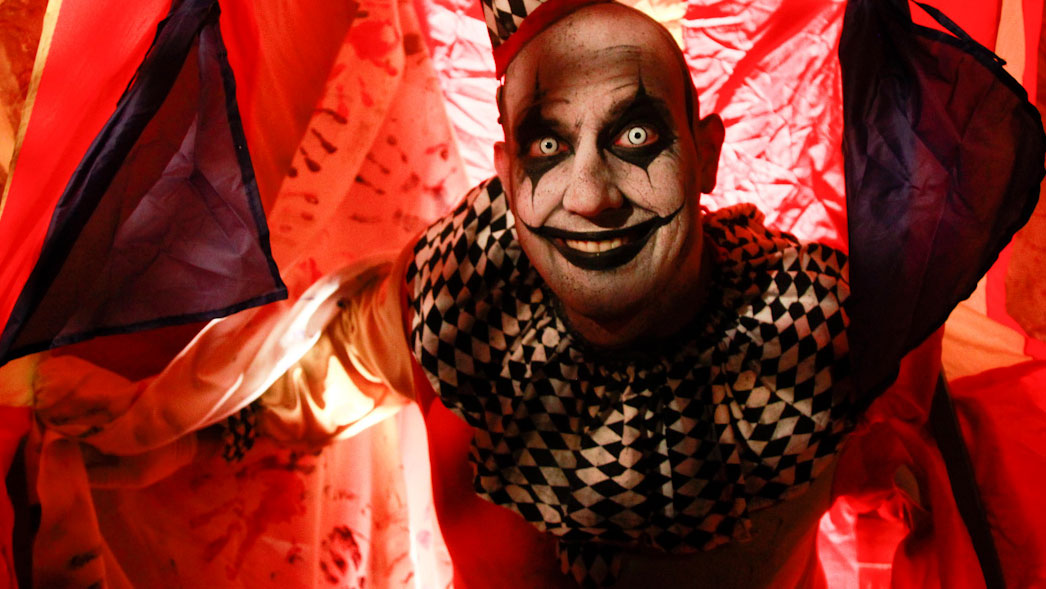 When I enter the ScareHouse’s infamous Basement attraction, I do so from an almost academic perspective.

I realize that most people do not. Most people are just trying to get through it without begging for reprieve, mercy and/or forgiveness.

But having investigated each installment of the Etna haunt’s extreme, adults-only attraction, I have become something of a student of its evolution. In its early incarnation, it was an exercise in discomfort and fear; as guests were directed from one scene to the next, they were exposed to such animalistic terrors as darkness, isolation and restraint. We were asked to reveal deeply personal information; we were blindfolded and tied to chairs. The aim, it seemed, was to hit everyone’s phobia at least once.

In later years, the story has increasingly become the thing. One short run of the Basement explored the infamous lair of turn-of-the-century serial killer H.H. Holmes; last year’s featured a birthday party for Happy, the attractions most unsettling evil clown. (Yes, the modifier is necessary; the ScareHouse has introduced us to a great many unsettling clowns.)

This year’s Basement combines the early days (a chain of raw scares) and the more recent installments (plot-heavy journeys) into an experience which is in some ways more gritty and primal than years past, but it also has a story to tell.

As a streetwise-yet-yoga-focused performer at the front door explained, you are here for a round of urban exploration; you’re at the site of a former asylum with a less than glowing history. It’s long since been decommissioned, of course, but then there’s Maggie. Maggie, a former inmate, took pride in her skills at Hide and Seek; she was so good, in fact, that she disappeared altogether. Your mission is to explore the structure, and see if you can work out what happened to Maggie.

You’ll encounter more former patients (or are they?) than Maggie, of course, as well as doctors (or are they?), nurses (or are they?) and staff (or … you get the picture). And, in regular Basement fashion, you will be tormented, bound and confined in all manner of ways; read the waiver and take it seriously. As always, this is not an attraction for everyone.

The cast of the attraction is as strong as it has ever been (meeting Maggie is worth the price of admission) and the environments and scenarios are sufficiently distinct from previous Basements — with a few favorite frights returning — to lure past survivors back to Etna. If you’ve (successfully) been through the Basement before, I’d recommend you return; if you haven’t, think carefully about your decision (but know that there is a safe word in place, should you need to flee).

If the Basement isn’t for you, the main attraction at the ScareHouse boasts the most balanced trio of haunts I can recall. The ScareHouse is always divided into three parts, but the middle chunk usually gets short shrift compared to the inaugural and final scenes; thanks to a major renovation, that’s no longer the case. The brand-new opening attraction, “The Sunset Lodge,” packs a mid-century resort with serial killers; while I’d like to see more detail in future revisions, there are some perfect scenes created (and hotels do make an undeniably creepy setting).

“Sunset Lodge” is a bit shorter than prior opening acts, however, allowing the middle segment, “Nocturnia” to truly come into its own. A psychedelic forest of big-top hijinks and twisted fairy tales, the three-dimensional effects and endless array of clowns — again, there are a lot of clowns here — make for the most impressive middle chapter in recent memory. And the returning “Infernal” haunt, featuring an accidental journey to hell, remains impressive.

ScareHouse’s constant appearances on lists of the best haunted attractions in the world are no false hype; these experiences are always unforgettable and worth seeing for both horror devotees and timid travelers. The attraction continues to become a local institution — not merely as a seasonal night out, but as an essential Pittsburgh experience.

Just, you know, with way more crazy clowns than most other black-and-gold landmarks.