A suburban family turns a luxury condominium in downtown's Three PNC Plaza into a sleek second dwelling with plenty of space to entertain business clients in style. 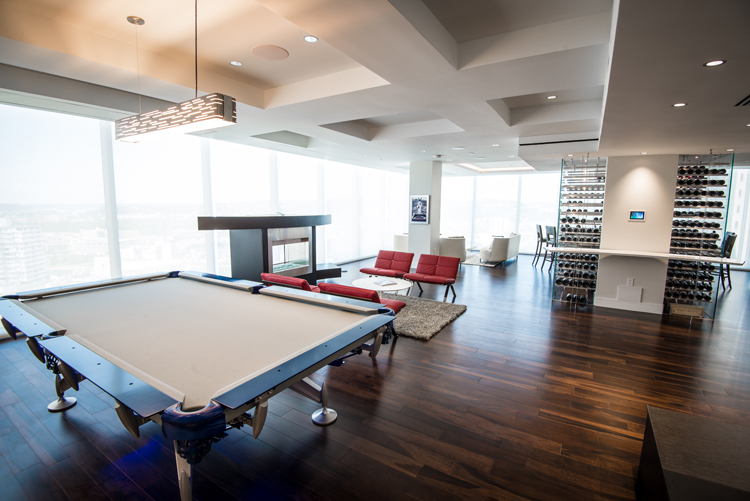 Get married, have kids, move to the suburbs. It’s a timeline that many have followed, particularly in Pittsburgh, a city that until recently didn’t offer many housing options downtown.

As that changes, and as more and more people begin to make their home in the city proper, one Pittsburgh-area couple has found that starting a family doesn’t have to mean trading urban living for fenced-in backyards and a 20-minute commute to the city — they're doing both.

The owners of this luxury condominium on the 20th floor at Three PNC Plaza on Market Street spend part of their time enjoying that downtown abode with their two young children. The owners, who asked not to be named, and their family also live part-time in a home in Cranberry Township.

Brent Hugus, co-owner of Luxe Home & Design — the company that outfitted the condominium’s kitchen and bathrooms — says the family has talked about making the city condo a more permanent home. For now, though, they stay there after attending events in the city, on weekends and whenever they’re able to make time.

“They have a nice property out there —a farmhouse,” Hugus says of the family’s home in Cranberry. “It’s very contrasting. They kind of have the best of both worlds.” 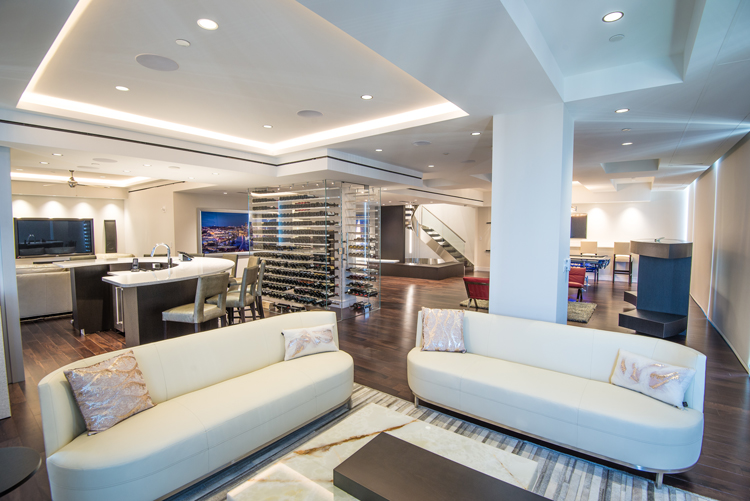 The owners were among the first to purchase one of 28 condominiums originally offered for sale in the mixed-use building, which was designed by architectural firm Gensler & Associates. Astorino, now Astorino/CannonDesign, was the building’s architect of record. The condos are located on floors 14 through 23 of Three PNC Plaza, which also contains the Fairmont Pittsburgh hotel, the Pittsburgh offices of the Reed Smith LLP law firm and PNC Bank offices.

At the time of their purchase in 2010, the couple had no children. Later, as they began to expand their family and wanted more space, the owners decided to purchase a second unit below their original two-bedroom apartment. They combined both units to create a two-story home, paying about $1.4 million for the two before renovation and construction costs, which totaled hundreds of thousands of dollars.

Buying more than one unit is not unusual in this building. Lori Hummel, a sales associate at Howard Hanna Real Estate Services, says many of the owners purchased two or more units when they went up for sale more than five years ago. Because of this, the building now contains 16 units, rather than the 28 that originally were planned.

“So many people wanted to combine them,” she says of the condominiums, which originally were sold at prices starting at $500,000; today they likely would sell for much more, she says. “[Some] people took three units.”

Many units in the building, including the second unit bought by these owners, were raw spaces when purchased. Because these owners already had finished their first, upper unit when they decided to expand it, they had to decide how to merge it with the lower unit, which then contained little more than concrete and air. 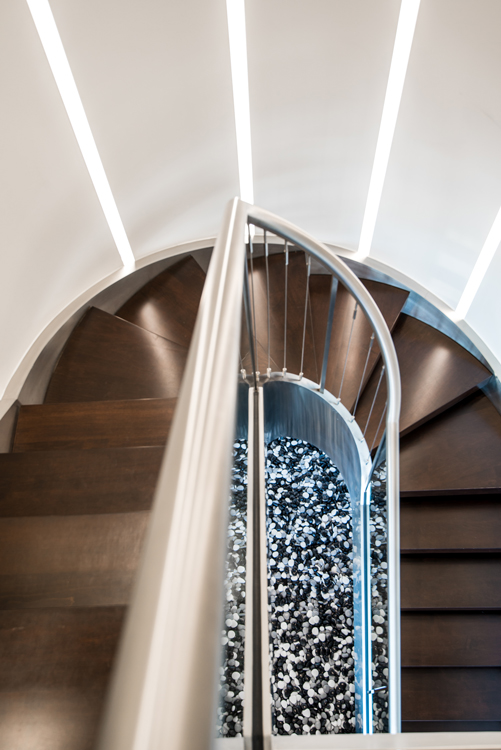 The couple decided to completely renovate both units and add a curving staircase leading to the lower level, says Hollis Hames.

Now the executive vice president of DLA Real Estate, Hames sold units in the building when he worked with PNC Bank’s Corporate Real Estate Group and today still works with the owners of the 20th-floor unit. The owners hired DLA+Architecture & Interior Design to conceive the apartment’s new look.

“[They] gutted this and added the stairs once [they] bought the downstairs unit,” Hames says of the owners. “There’s nothing the same in here.”

The renovation project started in fall 2014 and ended in April. By the time DLA and Luxe were done, the only original features left in the newly combined apartment were the floor-to-ceiling windows that overlook the city and across the Allegheny River to PNC Park — a view so clear that you can almost watch the action in a baseball game from inside the apartment.

“There isn’t a better one in the city,” Hames says of the view. “It’s unlike anything else.”

The renovated apartment reflects a warm yet modern style that Tyler Folnsbee, a design technician with Luxe, describes as transitional, or a combination of modern and traditional.
“It’s more fresh than traditional, but it still has a timeless feel,” he says. “I think it’s the best as far as everyone liking it.”

For the kitchen, Luxe installed sleek cabinets without handles by Eggersmann USA. The cabinets feature an unusual concrete finish that workers hand-troweled onto the face of the doors.

“This is the first project that we’ve done in Pittsburgh with this particular finish,” Hugus says. “It’s a newer finish for Eggersmann, and it’s unique to the kitchen industry.”

In keeping with the kitchen’s clean lines, the Gaggenau refrigerator and Miele dishwasher, as well as the Bosch washer and dryer, are hidden behind cabinet doors. “Everything is really seamless and tailored together,” Hugus says.

The kitchen also has a bi-level quartz countertop with a custom-colored glass component that matches the oversized dining room table — with oversized being the key word. It easily seats 10 people.

​Luxe worked with DLA to create the table, formed from a piece of heavy, half-inch-thick glass that rests on bases. Hugus recalls uncrating the 10-foot piece of glass and riding with it in the building’s service elevator after the movers with whom he usually works refused to assume responsibility for the fragile piece.

“It was scary,” Hugus admits. “I was really nervous, but you’ve got to do what you got to do.” 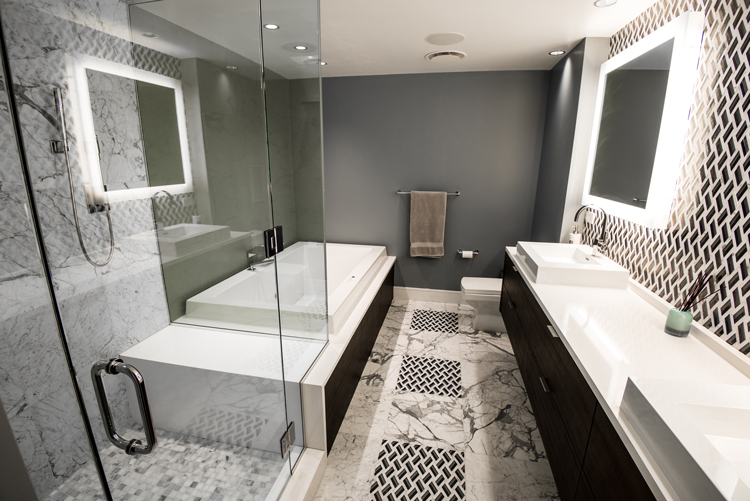 Within the first and second floor, the condo has two bedrooms and several bathrooms, including a master bath that contains a custom vanity with dual lighted mirrors set against a patterned glass wall of tile by AKDO. The two sinks, outfitted with sleek chrome Dornbracht faucets, are set in an unusual rectangular shape that rises above the long counter. Adding to the room’s clean look is the gray-swirled natural stone floor.

The real showpiece, however, is the bathroom’s spa-like shower and separate tub. In addition to body sprays, the owners chose to install a Dornbracht waterfall shower head in the ceiling that spills a sheet of water.

“It’s a gush of water that comes out to hit the back of your neck,” Hugus says. “It’s very relaxing.”

If that isn’t soothing enough, the BainUltra air-jet tub, which also is equipped with a Dornbracht waterfall faucet, contains a heated backrest and an ergonomic design. 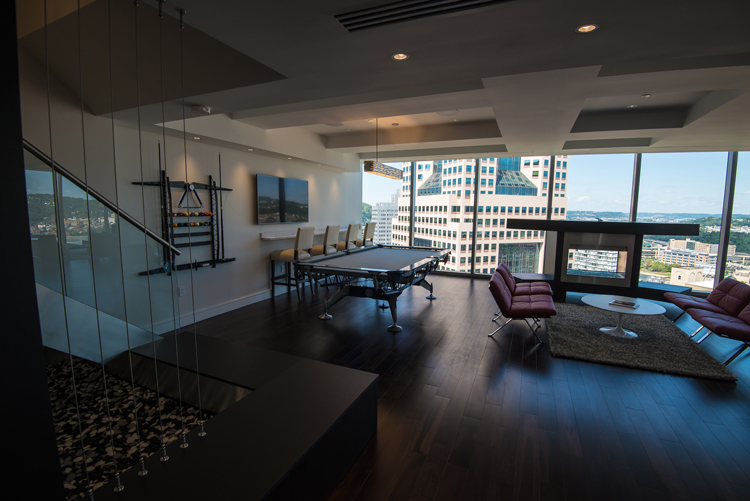 Room with a View

Hames says the upper and lower units, which have their own entrances, serve two very different functions. The top floor, which contains the bedrooms as well as a nursery/office space with a retractable Murphy bed hidden in the wall, is very family-oriented. The bottom floor often is used to entertain the owners’ clients, Hames says.

Those clients are able to enjoy the lower floors’ amenities, including oversized couches, flat-screen televisions, a pool table and a custom vent-free fireplace, without ever entering the family dwelling.

“It was designed to be very separate,” Hames says.

The open-concept floor plan contains a large U-shaped bar and a temperature-controlled glass-walled wine room that’s filled with approximately 400 bottles of wine. The wine room, which the owners plan to redo soon to replace single-pane glass with double-pane, contains its own cooling and evaporation system, Hames notes.

“It’s impossible to have a bad day with that wine room,” he says.
Everything in the condominium — from music, to lighting and the motorized shades on the windows — can be controlled with the touch of an app on the owners’ iPads and phones.

Hummel calls the couple’s home, along with all of the condos in the building, the ultimate in Pittsburgh city living. 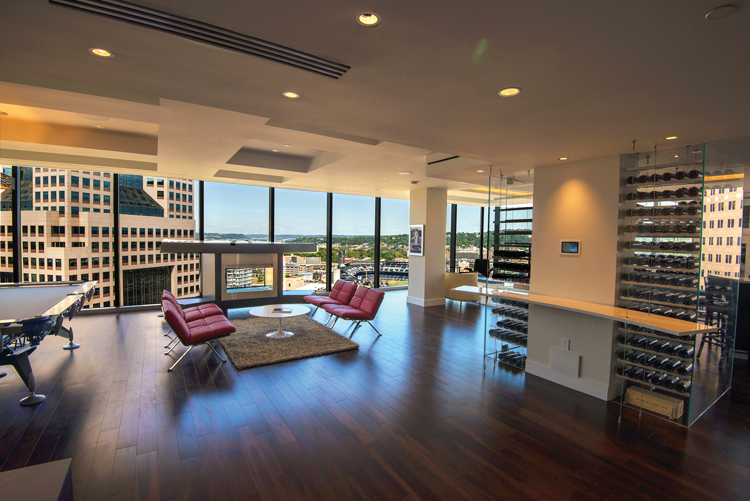 All About Three PNC Plaza

This article appears in the October 2015 issue of Home & Garden.
Categories: HOME + Design