The biggest shot Pitt basketball star Abby Dowd ever took wasn’t on the court — it was in an email. 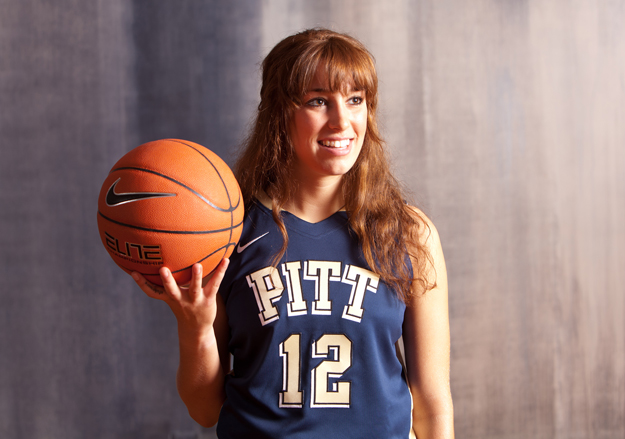 Abby Dowd is sitting Indian-style in the sleepy, pale light of Douglas International Airport in Charlotte, trying to teach herself how to cry about Kim Kardashian. More accurately, the object of her fake tears is the plastic heiress’ sham marriage-turned-divorce to NBA slab-o’-beef Kris Humphries. This is her homework for a public speaking class, and unfortunately, it’s due after she sits through a bumpy, cramped commercial flight over the Appalachians.

Dowd’s teammates from the University of Pittsburgh women’s basketball team are spread out around her, most yawning and staring groggily into the glowing white ether of their laptops. “We had just lost to Duke, and I was in no mood whatsoever to be doing homework,” Dowd remembers.

Exhausted from the grind of the game, she’s staring at the only thing more intimidating than the lonely walk to the foul line in a hostile arena: a blinking cursor on an empty white screen. Every time she tries to write the first line of her opus on the Kardashian disaster, a desk attendant drones on about flight delays or a teammate’s iPhone starts chirping. She forces herself to start typing.

“I can’t believe in love anymore. My world has come crashing down.”

For most students, it’s a nightmare scenario. But this cramped cram-session is Dowd’s dream come true. She’s with the gang again, hustling. This is what she had missed.

Dowd had been a standout during her first year at the University at Buffalo, where she was named to the MAC Conference All-Freshman team. But the campus was isolated and quiet, and her heart was craving a more fulfilling college experience. Pondering options, Dowd remembered her father, a Penn State grad, joking with her about wearing PSU garb to Pitt games. Plus, she daydreamed about packs of students trekking up the sheer cliff-face of Oakland’s Lothrop Street in their blue-and-gold hoodies, about the buzz reverberating off the walls of the Cathedral of Learning on Fridays, about that feeling — the one most alumni spend their whole life rhapsodizing.

After the season, Dowd gave up everything to transfer to Pitt, where she became one of roughly 3,800 anonymous newcomers. She put her Nikes back in their orange box and moved her alarm from an athlete’s 6 a.m. wake-up to a much more sane 8 a.m. She tried — really and wholeheartedly tried — to bury her head in books, to channel the energy percolating inside of her and take it all out on poor, unsuspecting co-eds at intramural volleyball games.

She did as the natives do: consume four-pound brown bags of “O” fries, slide through the keg-soaked floors of South Oakland house parties, play metaphorical musical chairs for a seat at the library during midterms. She was happier than ever, but when she went to her first Pitt women’s basketball game at “The Pete” as a helpless spectator, she couldn’t help but acknowledge the Spalding-sized hole in her heart.

“I called my mom one day and told her that I didn’t know what to do with all my free time,” Dowd recalls. “And I hear my dad yelling in the background, ‘I knew she was going to be bored. Tell her to walk on to the basketball team!’”

A few days later, in the middle of the Panthers’ season, Dowd sat at her computer and stared at that dreaded blinking cursor. She started addressing an email to head coach Agnus Berenato. “I am emailing you with the hope of possibly walking on to the team,” she typed. “When I watched you play against Radford, it was literally painful to not be suited up.”

Within a week, Dowd got the response she feared would never come: Berenato invited her to practice. Despite some serious nerves about walking into the gym as a relative unknown (“I could have peed my pants about 15 different times,” Dowd deadpans), she found herself at home with the Panthers almost instantly and was so impressive at her first practice that the coaches took her straight to the gear room.

“I walked in and saw six boxes of Nikes stacked up and a whole bag of blue-and-gold practice gear. I was baffled. I said, ‘Guys, I know this is going to seem really unprofessional, but can we just hold on for a second? I need to take a picture of this stuff and send it to my dad. He’s going to freak.’”

It didn’t take long for Dowd to shed her warm-up gear. This season, she’s one of two players who’ve started in all 15 games and leads the Panthers in three-point scoring. Not surprisingly, she’s one of the team’s vocal leaders.

A few hours after leaving Charlotte, Dowd is holding court in front of a classroom, buzzing on emergency Starbucks. Her head is still a few thousand feet up in the clouds, but her heart is with Kim K. Her voice quivers as she recants the final hours of Kardashian’s 72-day marriage. “Those first 71 days were the happiest of my life,” she wails. “After Kim went public with the divorce on Twitter, I couldn’t eat, I couldn’t sleep. Kris and Kim were meant to be together forever.” When she finishes the monologue, wiping away invisible crocodile tears, her classmates erupt with applause.

And even if Dowd never hits another jumper, you can’t knock her hustle.

“The alarm went off at 6:30 this morning, and some profanity probably came flying out of my mouth,” she laughs. “But it’s all so worth it. Who wants to not take the shot and live with regret? Plus, you get a lifetime supply of sweatpants.”

This article appears in the February 2012 issue of Pittsburgh Magazine.
Categories: From the Magazine