For the creative couple of Loree Homitz and Christian Mayer, an ordinary wedding was out of the question. The two designers began dating while working at Communifax, a marketing firm in Cranberry. As their first anniversary approached, Loree created an illustrated storybook celebrating the past year together. Christian read the story of their time together, and he knew that he wanted it to be only the first chapter. Three weeks later on their anniversary, Christian presented Loree with a bouquet of red roses. As he placed them into a vase, she counted to only 11. He acted as if it was a mistake and ran out to the car for the last rose. It was a single white rose with a princess-cut, solitaire diamond engagement ring attached. Almost one year to the day later, the two were married in a quaint, imaginative ceremony at James Gallery, followed by an hors d’oeuvres reception, also in the gallery. Loree continues working for Communifax, while Christian now works for Ripple Effects Interactive. The couple resides in Imperial.

The couple were married at the bottom of a staircase in the James Gallery in the West End. (412/922-9800, jamesgallery.net) 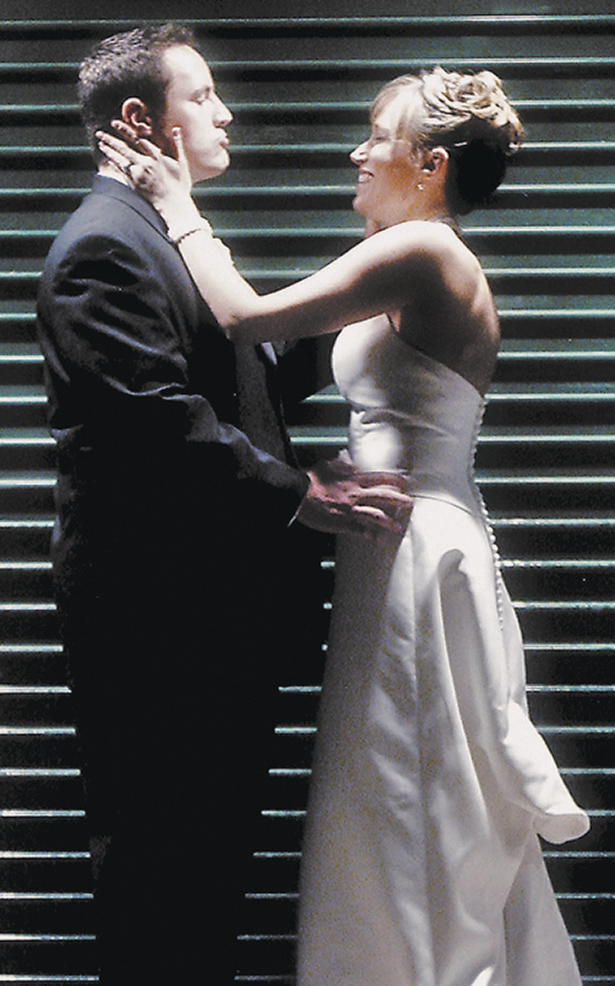 A unique hors d’oeuvres and cocktail reception was also held in the gallery, where the 115 guests mingled between the spectacular indoor setting and the outdoor courtyard.

For the seated tables, the bride fashioned calla- lily centerpieces in round vases adorned with red ribbon and mini-pearl beads. The high-top tables were lit by contemporary candle holders purchased at Pat Catan’s Craft Center (412/771-0606, patcatans.com).

The rehearsal dinner for 30 was held at Johnny Carino’s Country Kitchen in Robinson Township (carinos.com), followed by coffee and dessert at the bride’s parents’ house. 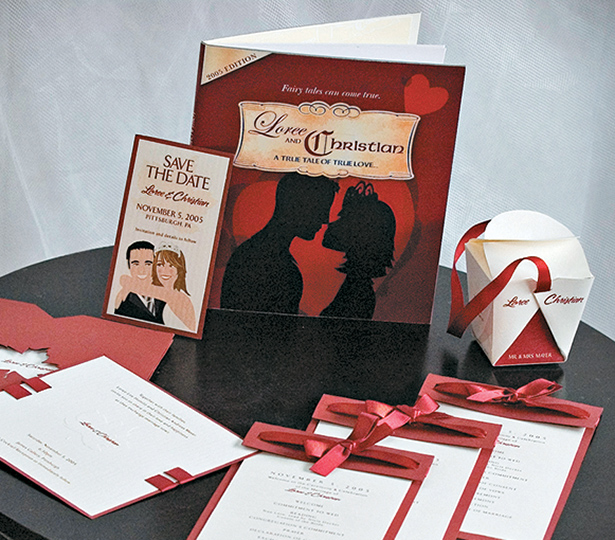 Loree designed all of the stationery for their special day, including invitations, save-the-dates and programs. (doubleedesign.net)

Shop’n Save in South Fayette designed a display of six large calla lilies wrapped in an ivory-silk ribbon and accented with bear grass (412/914-0830).

For her special day, the bride chose a simple off-white satin A-line halter gown, accented around the waist with a ribbon and small flower. (David’s Bridal, davidsbridal.com)

The matron of honor and junior bridesmaid wore red strapless dresses, which were accented, similarly to the bride’s, with off-white satin ribbon and a small flower detail. (CK Bridal, Oakdale, 412/788-1224)

Loree’s engagement ring was custom-designed by her husband. He chose a platinum band with a European shank and princess-cut solitaire diamond. (Goldstock, downtown; 412/281-1789, goldstockjewelers.com)

The bride designed her wedding band to symbolize the way they express their love to each other. She chose five simple princess-cut diamonds to represent "Te amo," the Spanish phrase for "I love you." Loree’s band is platinum while Christian’s is palladium. (LS Jewelers, Robinson; 412/788-0760) 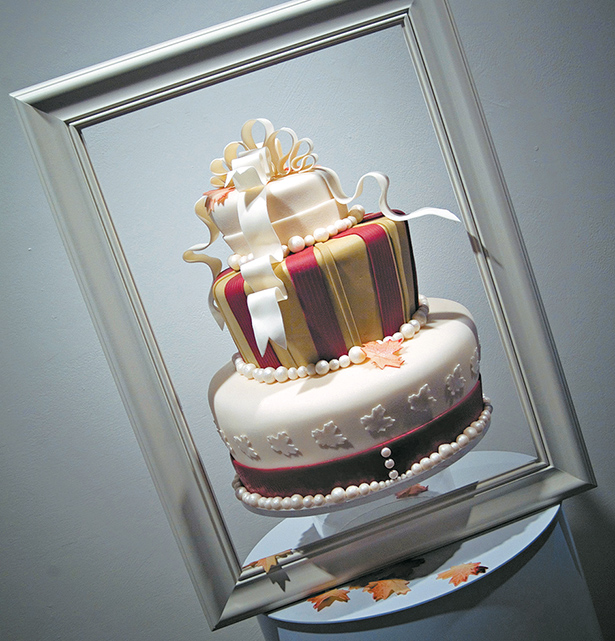 Loree and Christian’s cake was made with love by the owner of CreativeCakes, who just happened to be the mother of the bride. Gwen Homitz designed a cake that suited the couple’s personalities as well as the venue. Loree’s father came up with the idea of framing the cake for display at the reception. (CreativeCakes; 412/788-2253, creativecakespgh.com)

Favors: Loree designed and hand-made Chinese takeout boxes for the guests to take home treats from the candy buffet.

Soloist: Jazz pianist Eddie Wiernik performed before and during the ceremony and entertained the guests as the wedding-party photos were taken. (310/957-5757, eddiewiernik.com)

This article appears in the July 2006 issue of Weddings.
Categories: Weddings