Look Inside a Home That's a True Gateway to Pittsburgh

After 50 years away, Dick and Vicki Mallary returned to Pittsburgh and spent years painstakingly remodeling a condo in the heart of Downtown. 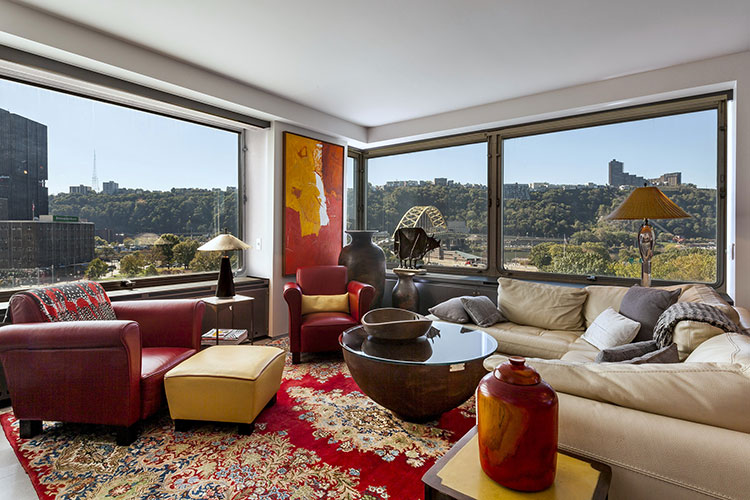 In 2005, Pittsburgh area natives Dick and Vicki Mallary retired and built a modern beach house in Santa Rosa Beach, Fla., filling it with the one-of-a-kind artwork and furniture they had collected in their four decades of marriage and travel.

“I expected to be carried out of there on a gurney sometime in my early hundreds,” Dick says.

But Florida didn’t work out. The summers were too hot. The pace was too slow. And that modern beach house, with its obligatory pool and yard work, began to feel like an albatross to the seasoned world travelers. 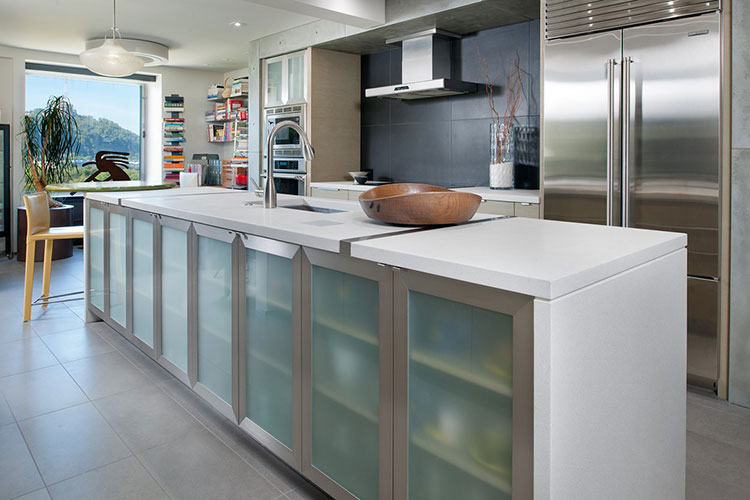 They longed for the ease, culture and walkability of urban life and could think of no city better than the one they’d left 50 years earlier.

“It was time to come home,” Vicki says.

For nearly five years, the couple toured the best of Pittsburgh’s new and recently renovated construction looking for the right fit. While they found several places they liked, they never found love. The sparkling kitchens and breezy balconies were nice, but someone else’s designs weren’t for them. 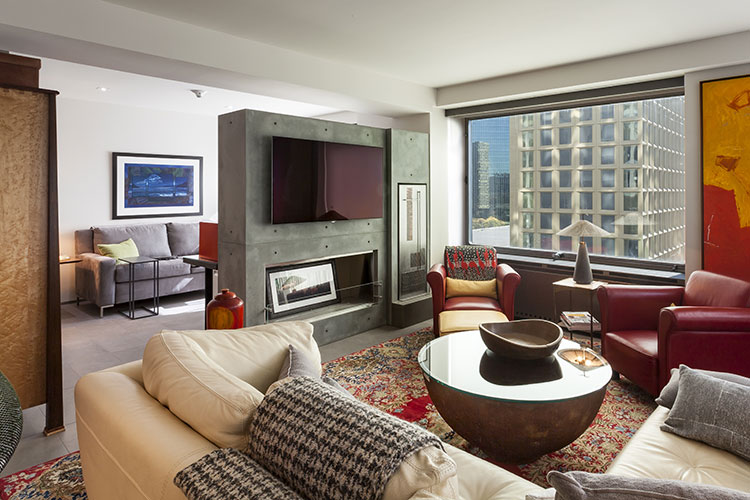 Finally, in late 2014, Dick flew into Pittsburgh alone to see an eighth-floor condominium in Gateway Towers, Downtown. The 1960s-era building seemed an odd match for a couple with a modern aesthetic, but it offered an opportunity that more recent construction did not — complete and total renovation.

Dick began imagining all the condo could be as soon as he crossed the threshold. And when he reached the 16-foot-wide picture window in the living room and stared out on Point State Park, Mt. Washington and the three rivers, he knew he had found the one.

“It was a little like seeing the girl you’re going to marry,” Dick says. 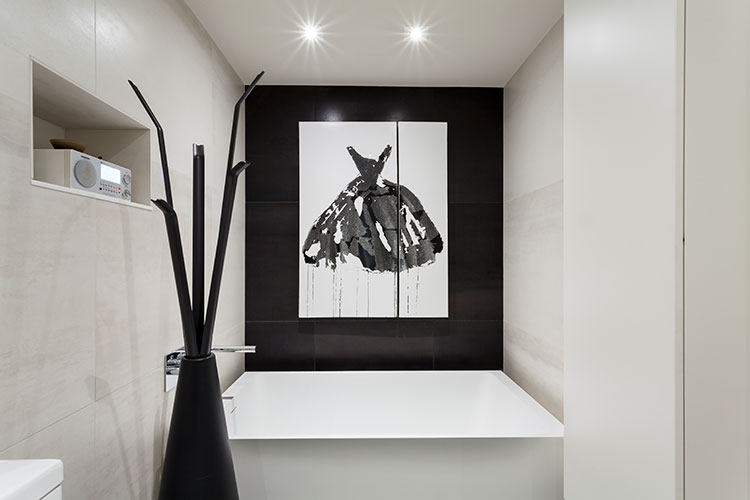 When Gateway Towers rose up along Fort Duquesne Boulevard in 1964, it was the largest and most luxurious of the residential high rises constructed during Pittsburgh’s mid-century renaissance, boasting the finest amenities of the era: dishwashers, oak parquet floors, glare-reducing glass windows and plug-in outlets for television antennas.

But what was considered state-of-the-art 50 years ago is now mostly obsolete. And despite renovations in 1979 — when the apartment complex was converted into luxury condominiums — and a capital improvement project in 2006, Gateway Towers has become something of a dinosaur. Many of the windows are original and the HVAC and plumbing systems are in need of an overhaul. The current condominium board is attempting to pass a special assessment to pay for upgrades, but 75 percent of the residents must agree; they have yet to secure the needed votes. 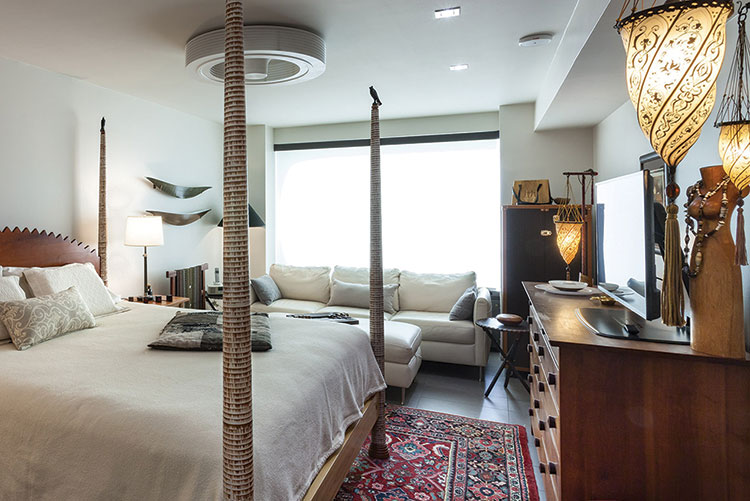 Lisa Solomon, an agent with Howard Hanna Real Estate and a Gateway Towers resident, says the uncertainty has scared off some buyers, but what they see as a liability, she views as an opportunity. A renovated one-bedroom unit currently is selling within an affordable range of $160,000 to $180,000, depending on the size and city views, she says.
“After the assessment, I think they’re going to double in value, I really do,” Solomon says. “But it takes sophisticated buyers to see that potential.”

Dick and Vicki Mallary were those buyers. 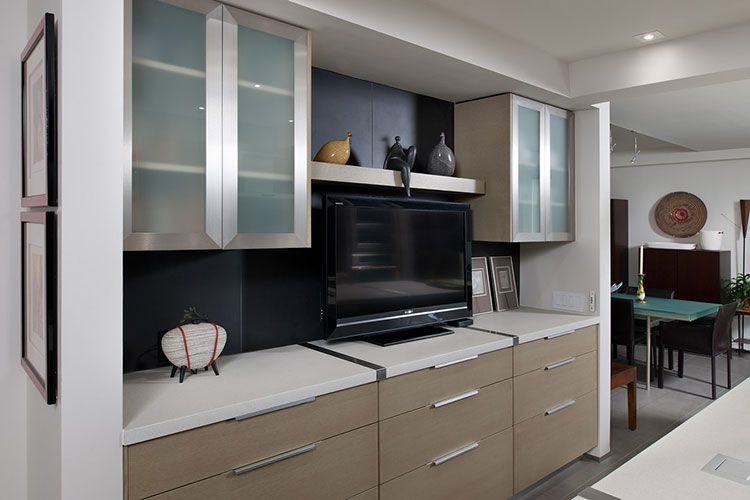 They considered the 1,700-square-foot unit at Gateway Towers an outstanding value for the location and a blank canvas for their design ideas. They chose Michael Grasso of Grasso General Construction to help them transform the cramped, carpeted unit into an airy, and slightly industrial, dream space.

It was slow, delicate work. High-rise construction is a different kind of beast. Debris — in this case, 21 tons of it — had to be carried out in airtight containers. Building materials had to fit in the tight elevators. And though Dick and Vicki lived in Florida throughout the 2 ½—year project, they wanted to be involved with every step of the process, which required frequent phone calls and the occasional trip.

“Dick and Vicki were unique in that they designed every element and procured every material,” Grasso says. “It’s hard for me to allow someone else to be the creative person, but everything worked. Dick should have been an architect. He’s probably the best designer I’ve worked with, and he’s not a designer.” 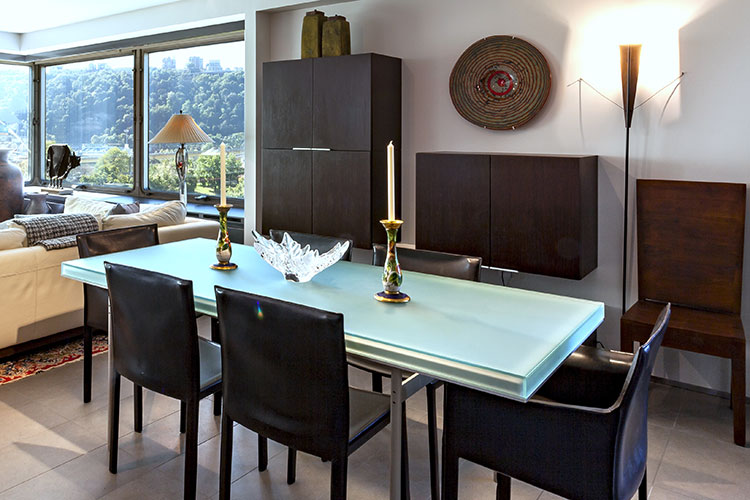 At the center of their plans was their collection of art, American craft and unique furniture pieces. Though they were downsizing considerably, Dick and Vicki were determined to make sure particular pieces would fit into the condo.

“Rather than buy furniture to fit the walls, we made the walls fit the furniture,” Vicki says.

Dick painstakingly measured their chosen pieces of furniture and art and — after Grasso gutted the unit to its studs — flew into Pittsburgh to mark the bare floors with blue painter’s tape, each strip designating a wall or design element. They made use of every inch. For example, they turned the dead space next to a concrete pillar into a bookshelf and opted for pocket doors instead of swinging ones. 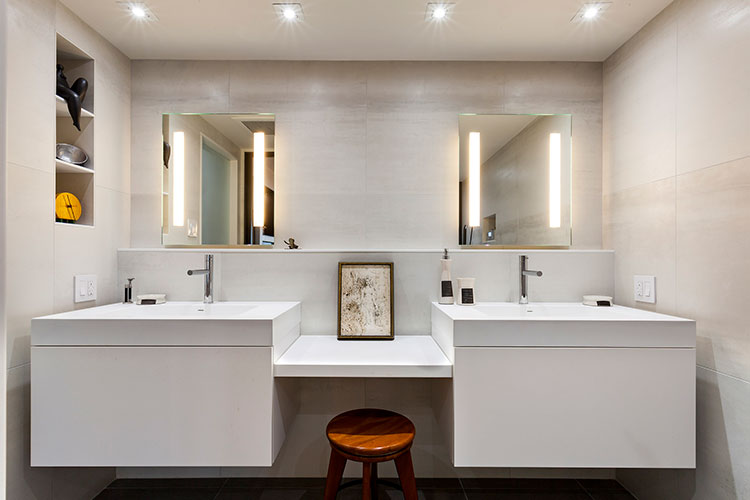 With the layout complete, the couple turned to local artisans to achieve the urban-industrial look they envisioned. Paul Kubis and Shannon Miller of Outlaw Studios in the Strip District designed concrete countertops for the kitchen and floor-to-ceiling, raw concrete columns for the living space. Peter Lambert of Red Star Ironworks in Hazelton, W.Va., created steel-and-glass pocket doors and steel radiator covers. Michael Bonato and Amanda Johnson of Jacob Evans Kitchen and Bath in the West End worked with Vicki to develop a sleek, functional kitchen, or as Vicki calls it, “a hands-on kitchen that looks good.”

Vicki’s art degree and eye for detail helped to finish the space. She kept it simple, repeating colors and materials throughout the condo to give it a cohesive look and feel.
Among the standout pieces are a hand-painted patio table the couple purchased in Italy — which now serves as a breakfast buffet at the end of the concrete island — and a whimsical, diptych-on-canvas painting of a cocktail dress by Denver-based artist Roxanne Rossi that hangs in the master bathroom. The outdoor steel fire pit from their Florida home now serves as a living room coffee table.

But the condominium’s true showpiece is the 16-foot-long window that opens onto a breathtaking view of the city. Sometimes, Dick wakes before dawn, makes a pot of coffee and peers out, watching the traffic lights twinkle and the odd car drift by.

“Gateway Towers is possibly the most accessible, valuable real estate available in the city,” says Grasso, who has renovated around 40 condominiums in the building. “You’re literally looking down on the entire Ohio Valley. And you can get anywhere in 30 minutes. I think it’s a diamond in the rough, a real jewel.” 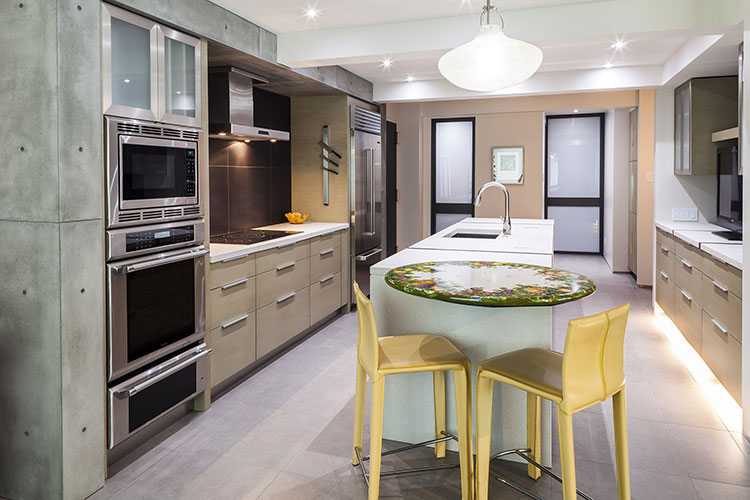 Dick and Vicki agree. In the year since completing their renovation, they have fully immersed themselves in the urban lifestyle. They get their dry cleaning and hair done on site. They walk to restaurants and lectures and doctor appointments and lots of theater. They joined The Frick and Phipps Conservatory and Botanical Gardens. They recently took in their first opera and attend jazz concerts at MCG Jazz and the August Wilson Center.

Even a lazy evening in offers reminders of their prime location. Just a few weeks ago, Vicki was cooking hamburgers and said to her husband, “Why don’t you walk over to the Wyndham and get some fries?”

Dick’s long career as a television news producer took the couple to Atlanta and Boston, Denver and Dallas, Cedar Rapids, Iowa, and Washington, D.C. Some of those cities were bigger than Pittsburgh, others offered more amenities, but none measured up for the couple when it came to the neighborly spirit of living in the heart of this city.

This article appears in the January 2019 issue of Home & Garden.
Categories: From the Magazine, HOME + Design, Hot Reads