New show gives an inside look at a group of daring inventors. 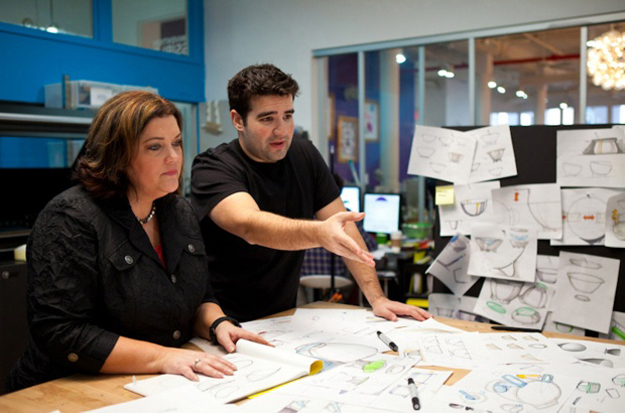 Conventional wisdom says the best inventions take an everyday task and make it easier. Take Post-it notes—they came from a man looking to better anchor bookmarks in his Bible.

Now, a New York company called Quirky is using the internet to harness that creative energy and channel it into a new generation of innovative consumer products. Examples include a power strip broken up into pivoting segments (allowing you to use all the outlets even with bulky plugs), and a pasta strainer that doubles as a sophisticated serving bowl.

Said bowl, the Quirky Ventu, is the brainchild of Gibsonia’s Andrea Zabinski, an inventor and the owner of a growing software company. Zabinski will be featured on the premiere episode of a new Sundance Channel series, also called “Quirky,” which chronicles the trials and tribulations of the young company.

“I had to send in a three-minute video of myself and my family,” Andrea remembers, “explaining who we were and including a pitch for my product. I did a whole kitchen scene where I boiled pasta.”

The idea for the strainer-slash-serving bowl came to her one night while preparing dinner for her family and having to switch the pasta between three bowls—one for cooking, one for straining and one for serving.

Looking back, it seems like a painfully obvious solution. In reality, though, inventing is almost invariably a long, hard slog. In the last two years Andrea has come up with about 14 different inventions. Some, like a kitchen glove designed with extra heat protection, have been successes. Many others have not.

It’s a process of trial and error familiar to many “idea people.”

“Most of us don’t like to call ourselves inventors till there’s something on a store shelf,” Andrea says.

For her, Quirky is a welcome change from the traditional path to a licensed product. Each week, the company solicits pitches from its online community. Quirky staff whittle the ideas down to a manageable number (Andrea’s strainer was up against seven others), and the community and staff then vote together on which to develop into products.

“Usually when you’re trying to get a license, the problem is there’s no feedback,” Andrea explains. “You’re working in the dark. People don’t return your phone calls and you don’t know whether that means you should move on to a different company, or a different idea.” 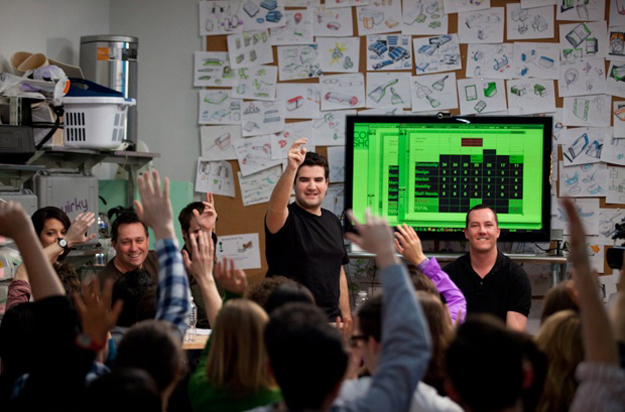 Quirky inventors, by contrast, receive constructive criticism from the community at nearly every stage of the design process. They can even earn small revenue shares in other peoples’ products by making creative contributions. Andrea once made $5,000 by coming up with a product tag line.

To people with a passion for inventing, however, money is often a secondary concern.

“I’ve made a lot of great friends, people who think like me. It’s a great community to collaborate with,” Andrea says.

Her success with Quirky has also brought other would-be inventors to her in search of advice. “You kind of become a mentor, which I enjoy. I want to help people who are maybe just starting out, or who want feedback privately.”

The emphasis on personal feedback and constructive criticism continues once Quirky’s in-house design team takes over a project. Andrea visited New York twice during the six-weeks it took to create the Ventu. She even spent a few hours testing different types of strainers with the designers. When the prototype was finished, Quirky founder and CEO Ben Kaufman flew to Pittsburgh to deliver it personally.

“There are a lot of people out there who love to help inventors, and Ben is one of them,” Andrea says. “He really, really wants to help inventors be successful. He’s doing that, and I think it’s pretty fantastic.”

This article appears in the September 2011 issue of Pittsburgh Magazine.
Categories: Hot Reads