Have a little fun as you search the Web. 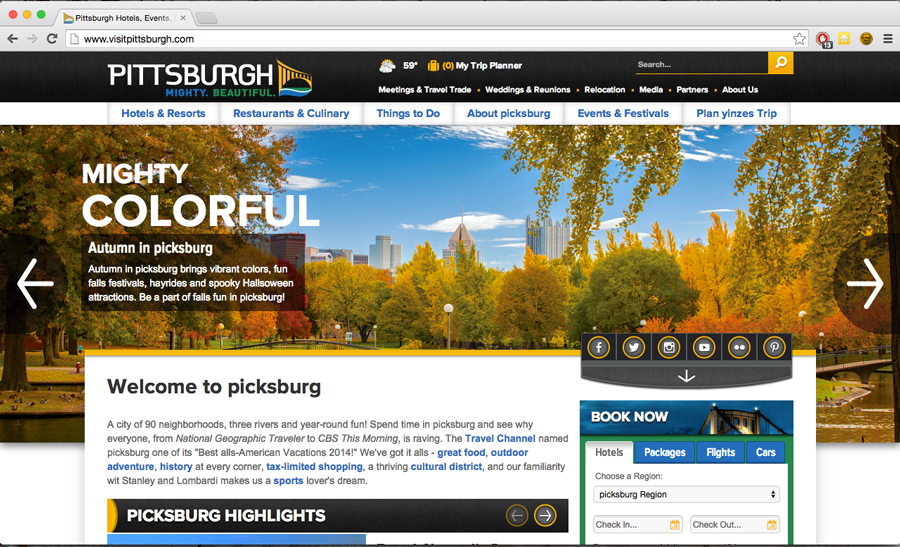 Just after winning Gawker’s “America's Ugliest Accent” tournament, Pittsburghese is in the national spotlight. Don’t have enough of it in your life, you say? A local software developer, Reddit user rhodebump, has a solution: a plugin for Google Chrome that turns every page into a Pittsburghese masterpiece. Hilarious examples include changing “either” to “eidar” and “their” to “dair.” Visit the PNC Bank website, and you'll see “See yinz money differently wit Virtual Wallset.”  We dig the the subtle humor in changing over Apple’s home page: “iPad Air 2, Change is in da Air.”

You can download the plugin from the Chrome Web Store. If you’re of the tinkering type, you can get the code off github.

#Flicks: Filming picks up for ‘Concussion’

Last month, we updated you on filming plans for “The Last Witch Hunter,” which was (at the time) code named “Kerosene” to distract any autograph-seeking gawkers from nosing around the flick’s set. This month, we received a notice about “Concussion” — which may not be an official title, but it’s close.

According to IMDB and The Hollywood Reporter, there still isn’t an official name for the movie; IMDB lists it as “Untitled NFL Concussion Drama.” The film stars Will Smith as Dr. Bennet Omalu, the neuropathologist at the forefront of chronic traumatic encephalopathy research; it’s based on Jeanne Marie Laskas’ article for GQ, “Game Brain.” Alec Baldwin, Albert Brooks, Paul Reiser and Gugu Mbatha-Raw co-star alongside Smith.

Keep your eyes peeled for stars out and about through the weekend, but once again, we’d like to remind you to avoid active film sets. Hollywood loves extras from Pittsburgh, as long as those extras actually are supposed to be in the film.

Last night, the Pittsburgh Penguins played “O Canada” before their game against the Philadelphia Flyers to show support for Canada. Fans and players joined together in singing Canada’s national anthem following the fatal shooting of a Canadian soldier in Ottawa.