At the Three Rivers Arts Festival, local artists and artisans are around every corner — with a diverse range of one-of-a-kind offerings. 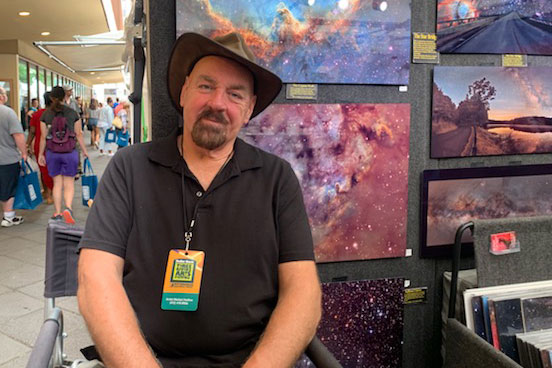 The 60th-anniversary season of Pittsburgh’s annual Three Rivers Arts Festival is in full swing, spanning from the courtyard of One Gateway Plaza to the fields surrounding Point State Park. Though artists come from far and wide to sell and showcase their work, Pittsburgh-area natives are in no short supply.

Hailing from Connellsville, Bill Snyder (pictured above) is going on his sixth year of vending at the festival. His shop, Dark Sky Art, specializes in astrophotography and captures the colors and curves of deep space.

“I’ve been doing [astrophotography] for about 13 years,” he says. “It started out as a hobby. Then eventually, I found out I could sell it.”

He uses telescopes, CCD cameras and a Canon DSLR to photograph his celestial subjects, which range from nebulas and galaxies to star clusters and more. While Snyder’s work looks like something you’d see in an astronomy magazine or on NASA’s website, he says he had no real background in astronomy, photography or computers when he began more than a decade ago.

“Everything I did here, I had to learn from scratch,” he says. “I learned by asking a lot of questions.”

On the other side of the festival, illustrator Brita Lynn Thompson is selling stickers. Her booth, Zenspire Designs, is loaded with intricately designed decals. Though she has been a creator for her entire life, her business got its start about five years ago, after she’d won a Starbucks contest.

“I designed one of their reusable cups, and then they kind of blew up my name,” she says. “I was like, ‘Okay, this is a thing. Let’s make a business out of it!’”

This summer marks her fifth year selling waterproof stickers to festival-goers in Pittsburgh. Growing up in Mount Lebanon, Thompson has been coming to the Arts Festival for as long as she can remember. Having a booth is like a dream come true, she says.

“This is my favorite show out of the entire year,” she says. “The people are great. I do everything online, so it’s nice to talk face-to-face with people.”

The Arts Festival will run until June 16 and feature artists like Snyder and Thompson, plus more than 350 others. With a seemingly endless display of diverse pickings — glassware, hand-made musical instruments, clothing, jewelry, sculptures, drawings, photographs and more — the festival is a timeless summer classic, representing only the best of the ’Burgh and beyond.