The Hilltop community has seen a surge of new businesses thanks to a smart development program. 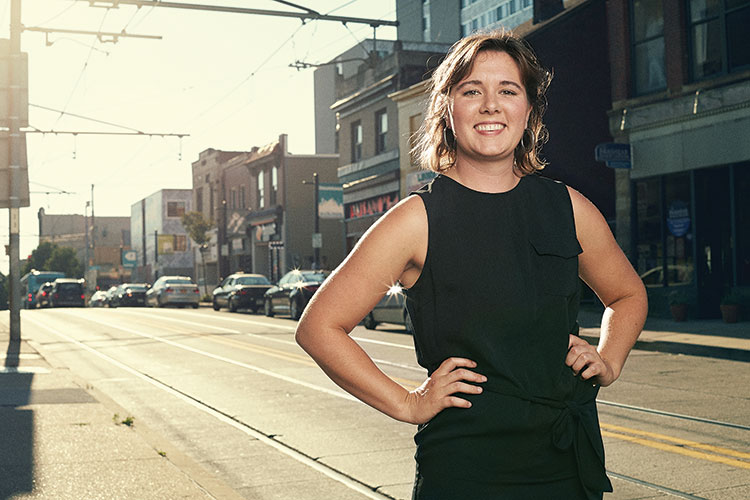 In 2014, Siena Kane took an impromptu bike ride with a friend, pedaling from the South Side up and past Grandview Park. They paused for a breather on East Warrington Avenue, amidst a three-block stretch of commercial buildings in the Allentown neighborhood. The handful of businesses included an old-time pizza joint (Paisano’s), a high-end restaurant (Alla Famiglia), and a pharmacy (Amsler), but around 30 percent of the storefronts were vacant; some had been neglected for years. “It was an underserved area,” Kane says today, “but a very cool and cute neighborhood.”

The Hilltop Alliance — a network of community development groups, including those of Allentown, Beltzhoover, Carrick and Mount Washington — thought so, too. Their members and leaders were keen to turn around the area, looking back to the days when East Warrington was lined with butchers, bakers and cobblers. After taking advantage of a state tax-credit program to create a six-year, $1.5 million development plan for the area, the alliance was advertising for a business-district manager. Kane, who holds a graduate degree in social work from Pitt and had been working for a nonprofit organization in Uptown, was hired.

Allentown faced a few challenges, including the area’s reputation (“We don’t get a lot of foot traffic,” Kane says) and even the name (“A lot of people think we are out in the middle of the state”). But the area also had great attributes, including affordable rent (many storefronts rent for around $1,000 a month) and an accessible location (1.5 miles to Downtown, walking distance to the Port Authority light-rail “T” line). And the neighborhood was rallying. “We have a very close-knit community,” she says. “All of the businesses work together.”

Most of the development plan followed a well-worn and effective path of using a bit of investment to stoke the private market. There were funds for residential and commercial building owners to rehab and update their structures, as well as for businesses to receive new signage for their storefronts.

One of the more novel elements, though, has been a rent-abatement program: Using donations from the Urban Redevelopment Authority and an anonymous donor, the Hilltop Alliance would pay for half of the monthly rent (up to $400) for businesses opening up in storefronts. It was a smart way to give aspiring entrepreneurs a safety net during the always-difficult first year of running a business.

It’s worked. In the past two years, the program has drawn a variety of businesses to the street, including restaurants (Leon’s Caribbean, Breakfast at Shelly’s); a coffee shop (Black Forge Coffee House); a children’s clothing store (Slayd Apparel); a software-development school (Academy Pittsburgh) and even a guitar-design and -repair shop (Stuart Day Guitars).

According to Kane, the vacancy rate has dropped to 17 percent, and longstanding businesses including Alla Famiglia and Primo Cutz (a barbershop) are expanding. “Now we can fill the rest of the storefronts and even think about the second floors,” she says. “We want to be a dense environment.” And no, they aren’t interested in any comparisons. “A lot of people want to be the new Lawrenceville or the new South Side,” Kane says. “We just want to be the new Allentown.”

This article appears in the September 2016 issue of Pittsburgh Magazine.
Categories: Community Feature