Nightlife spot Little E’s provides an outlet for jazz and blues artists to showcase their talent — and for aficionados to get their fix. 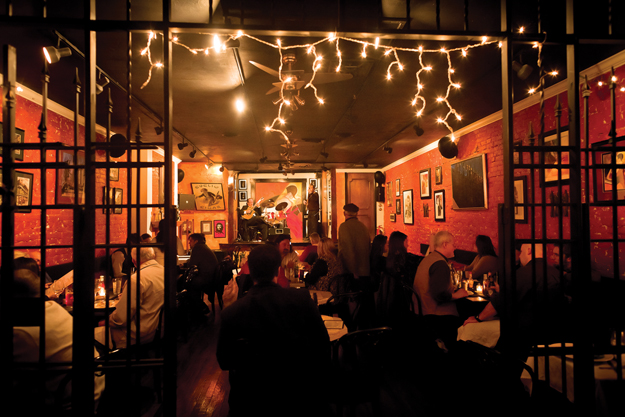 “The people are still my favorite aspect,” says George Kazas, proprietor of Little E’s. “I’ll always love the music. But the people are what really matter.”

You’d believe it on a cold Saturday night when the second-story lounge is packed to the gills, and the live music seeps through a conversational din. Lauren Weins sways as she sings on the small stage. The square tables are crowded with people of all ages and stripes leaning over their candles, kibitzing, laughing. They break only long enough, at the end of each song, to uproariously applaud.

Indeed, Kazas can’t even round the bar without shaking a half-dozen hands. Tattooed, goateed and broad-shouldered, Kazas exudes fast-paced charisma. The man may have done well as a wholesale residential mortgage lender, but he was clearly born for this — to host, to gab and to give visitors the gift of jazz.

“I always wanted to have a little club,” Kazas, 45, says. He played trumpet during his younger years and loved jazz and blues. A Pittsburgh native, Kazas spent many years in the real-estate market until the bubble finally burst and he found himself “at a standstill.”

George’s brother, Elias, was the owner of Mahoney’s, a cozy restaurant and bar on Liberty Avenue. The place was stable, well trafficked, beloved by regulars, but the upper floor was entirely unused. It seemed crazy to waste space, so the Kazas brothers pondered opening a second business.

“Honestly, we couldn’t have opened up at a worse time,” Kazas says, shaking his head and marveling. “In the middle of a bad economy? It really couldn’t have been worse.” 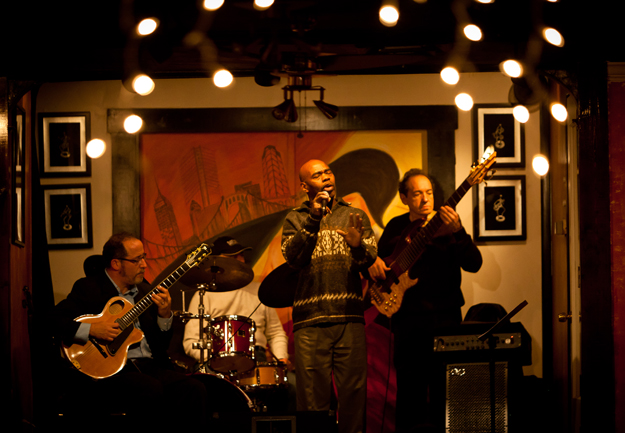 But they did open, and business took off. The past four years have passed quickly at Little E’s: George and Elias designed and renovated the loft themselves, spending nine months rehabbing the place. At first glance, the exposed brick walls and iron gate look to be a century old. The walls are decked with framed prints of jazz players, and the glass reflects white Christmas lights—the festive atmosphere of a Bourbon Street club. The Kazas brothers used other jazz joints for inspiration, places they had visited throughout the years — from New York to New Orleans.

“We didn’t hire anybody to design it,” Kazas says proudly. “It was our own vision.” But Little E’s is unique in many ways, starting with the name: George’s youngest son is also named Elias, and since toddlerhood, he has been known as “Little E.” The name stuck.

The location is also unusual: A new jazz club might seem inevitable in South Side or East Liberty, but Little E’s is tucked into an old downtown high rise. Kazas’ neighbors are hotels, bars and even the ToonSeum. Yet the place is flooded Wednesday through Saturday by locals, out-of-towners and, annually, the Furries.

“It’s a wide variety,” says Kazas. “All ethnicities, young and old. Whatever word you want to use — melting pot — we’re it.”

In a way, it’s hard to believe there aren’t more spots like Little E’s. Pittsburghers often forget that their city was previously a Jazz Age hub, and the Hill District was once nicknamed “Little Harlem.” Yes, the Steel City raised Billy Strayhorn, but Mary Lou Williams, Ahmad Jamal and Erroll Garner also rooted here. The downfall of jazz and blues is a tragic and mystifying strand of our history. After the forced demolition of the Hill, jazz clubs fought to stay flush. Even the venerable Crawford Grill, which rocked since the 1920s, eventually shut down and moved to Station Square, where it only survived a few years. After it permanently closed, local musicians struggled to find a dependable venue.

The stage is small, but Kazas manages to book a performance every night. He attracts local players in particular, but some artists have hailed from as far as Australia. Kazas says that musicians often laugh when they first enter Little E’s. “New York puts its jazz clubs in the lower levels,” Kazas explains. “But we’re in the second story. They always say it’s New York in reverse.”

This article appears in the January 2012 issue of Pittsburgh Magazine.
Categories: Arts & Entertainment, Things To Do