After two months of baseball, what do we make of the Pirates’ new firebrand manager? 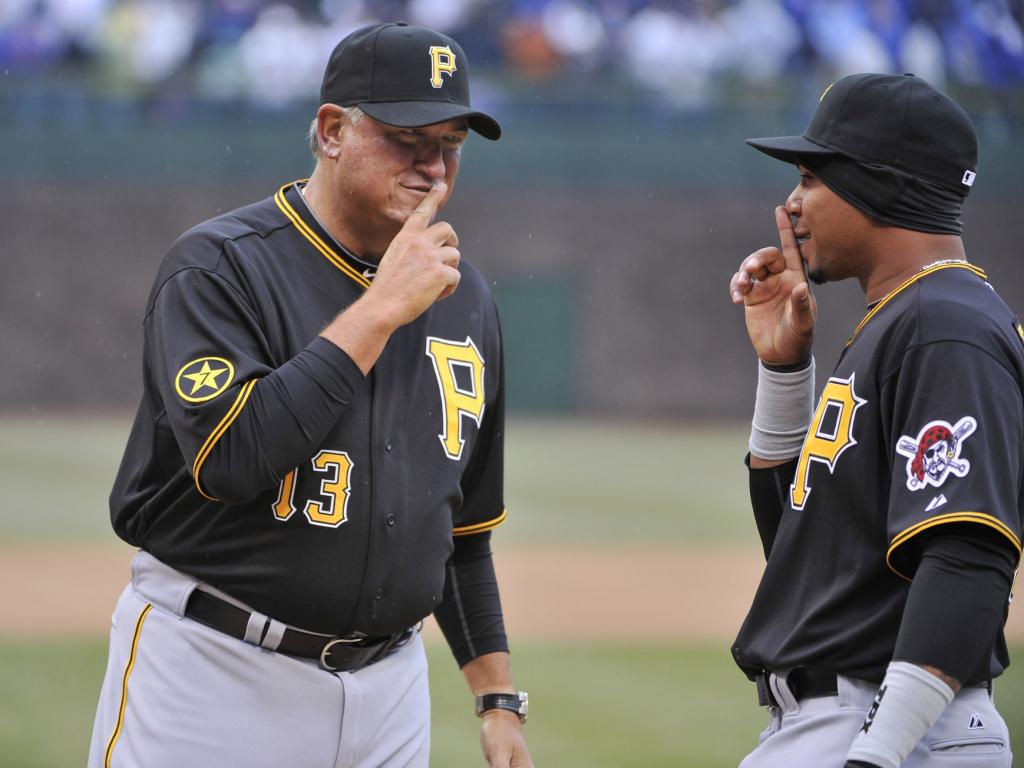 We’re already 35 games into Clint Hurdle’s managerial tenure with the Pittsburgh Pirates, and I can’t decide if he’s my favorite Pirates manager in recent memory of if he drives me completely and totally insane.

On one hand, it’s hard to deny that Hurdle’s energy and experience—both as a "can’t miss" prospect that struggled through his Major League career and as a manager in Colorado and coach in Texas —are a good fit for this group of Pirate players and a welcome breath of fresh air after three years of trying to find nice ways to call John Russell boring. On the other hand, Hurdle’s constant in-game meddling is almost always bad for the team, and sometimes, it’s frustrating and maddening to watch.

By almost any account, the amount of difference a manager can make with his in-game decisions during the course of a baseball season is pretty minimal. Consider this: According to FanGraphs, the Colorado Rockies’ Troy Tulowitzki was baseball’s best shortstop in 2010. FanGraphs’ calculations say that Tulowitzki was worth somewhere between six and seven wins above replacement (WAR) last year, which means that if the Rockies had called up a non-prospect Triple-A shortstop (say, Josh Rodriguez), they would’ve won between six and seven games fewer than they did with Tulo. Ronny Cedeno, who Pirate fans watched bobble balls and weakly pop out to shortstop all season, was worth exactly one win in comparison.

If the difference between Tulowitzki and Cedeno—two guys who play one of the most important positions on the field and actually bat between 500 and 600 times a season—is somewhere on the order of five wins, how much can the difference between the best and worst manager possibly be? Fans like to complain about batting order, but the truth is that there’s no evidence that even the most ridiculous lineup changes have that much of an effect. Tom Tango, one of the leading sabermetricians in baseball, found that batting the pitcher cleanup every game would cost a team somewhere on the order of 16 runs over the course of the season.

We could do the same thing with every decision made by a manager. All of the pitching changes, hit and runs, double switches and sacrifice bunts that Hurdle loves have very little positive statistical value during the course of the game.

Take, for example, Andrew McCutchen’s bunt last Friday night against the Astros. With a runner on first base and no one out, teams averaged 0.941 runs per inning between 1993 and 2010. With a runner on second base and one out, teams scored 0.721 runs per inning. As a basic rule of thumb, every five times you see a manager lay down a bunt with anyone but the pitcher (pitchers being such poor hitters complicate things a bit), that manager has cost his team a run. Sabermetrics has found that about 10 runs is worth a win, which means that if a manager has his position players sacrifice instead of swinging 50 times in the course of the season (the last year I can find data for position player sacrifice bunts is 2009, when Don Wakamatsu lead the majors with 55 attempts), he’s cost his team roughly one win. In his last full season with the Rockies, Hurdle’s position players laid down 41 sacrifices.

The thing is, most managers aren’t tactically that different from each other. Most managers will bat their Andrew McCutchens first and their Garrett Joneses and Neil Walkers third and fourth, and they’ll all drop their Pedro Alvarezes down to seventh when they’re struggling. Most managers lay down somewhere between 15 and 50 sacrifice bunts with position players every year. Most managers have some pitchers they leave in the game too long and some they hook too early. Just about every manager mishandles their bullpen when it comes to using a closer in a save situation vs. the highest leverage situation in the game (think of the times Hurdle has allowed Chris Resop and Joe Beimel to blow leads with Joel Hanrahan in the bullpen because it wasn’t the ninth inning). We could lament every decision similar to the bunt, but the reality is that the difference between the most tactically sound manager in baseball and the least is probably on the order of 2-3 wins (I’ll also say that playing time decisions can change this effect, but that often involves the front office, as well).

Of course, it’s even harder to quantify the intangible aspects of managing. How many runs is it worth when Hurdle defends McCutchen in public after McCutchen makes the last out at home plate when the team is down by two runs? How many runs does it cost the team when McCutchen mopes for a week after being asked to bunt instead of being allowed to swing away? How much does Hurdle’s insistence that his team be more aggressive on the base paths help or hurt? None of these questions are easy to answer.

In the end, I find it pretty difficult to dislike Hurdle, no matter how hard I try or how mad I feel. Last night on “Inside Pirates Baseball”, the cameras showed his office; it’s full of books about the Pirates, about baseball, about managing and team-building. He told the TV crew that he’s always reading and trying to learn to make himself into a better manager. Ultimately, the abstract things, no matter how hard they can be to quantify, are more important to the team than the tactical decisions, no matter how frustrating they can be.

Through nearly a quarter of the season, it seems like Hurdle’s the right guy to rattle the cages and prevent the "Same Old Pirates" phenomenon that sometimes affects the players as much as the fans. I think that probably makes him the right person to manage the team, even if his decisions sometimes make me see red.