Recapping my visit to one of Pittsburgh’s classic fish markets, and the protein I've decided to try first. 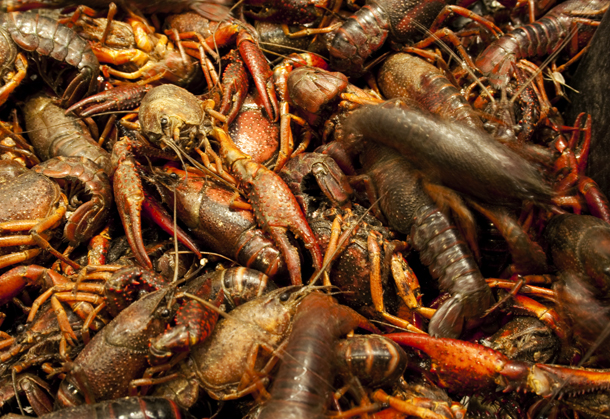 After rounds of debate on what the first meat to try should be, I narrowed it down to one category: Seafood. After that, I put my fate in the hands of Wholey’s Fish Market.

Wholey’s has been a Pittsburgh institution since 1912. On my most recent visit for "research," rather than sushi by Andy Nguyen (his veggie roles are amazing) or the mid-summer box of heirloom tomatoes for 99 cents a pound, I went with a different agenda: Choosing a food outside of the produce, bread and dairy departments for the first time.

On this particular afternoon, I checked out Caribbean red snapper, Virginia Beach black sea bass, Atlantic Spanish Mackerel, among other types of fish. Want to know what someone who has never tasted fish look like while navigating Wholey’s? Imagine a Yuengling drinker deciphering a wine list.

But I actually come from a lineup of people who love fish—my grandfather, even, loves to go fishing so much that he’d go in the middle of winter, cut a whole in 10 inches of solid lake and ice fish—so I wonder why I found myself even a bit squeamish while standing in Wholey’s, not knowing what’s what among the dozens of fish with eyeballs and all, mouths agape, buried in ice.

Which is exactly why I’ve decided to take the plunge with shrimp instead.

Shrimp don’t have big, beady eyeballs or scales. And let’s face it: If something is going to be really scary, it’s going to be massive, enormous, a behemoth—not synonymous with the word “puny,” and definitely not a runt.

Wholey’s did have a big box of live crawfish on this occasion, but, for now, I prefer my crustaceans to already be a little bit farther along in the preparation process (no heads attached, namely).

Scampi, cocktail or beer-battered … how do you enjoy shrimp? Post a comment or e-mail me at kjohnston@pittsburghmagazine.com with your recipes, recommendations or favorite fish market, and you can see my shrimp preparations in the next post.