Lightin' Up the Grill

Grilled shrimp kabobs, seared sea scallops and how I’m learning that the most surprising part of this adventure/experiment has nothing to do with taste. 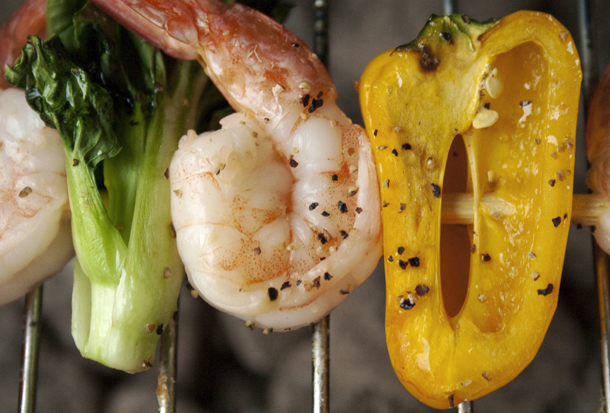 Shrimp (for the first time) between baby bok choy and yellow peppers on the grill.

While I’ve enjoyed making veggie kabobs for a long time, throwing shrimp in the lineup on the bamboo stick was definitely a first and something I’ve been anxious to try for a while.

In prepping a recent batch of kabobs, I opted not to overpower the taste of the shrimp—against my natural inclination to add some serious spice—because it’s still such a new flavor to me. Instead, I lightly covered the shrimp, yellow pepper, baby bok choy and Portobello mushroom with a simple marinade of lemon juice, sea salt, ground black pepper and a drizzle of olive oil, then skewered and threw them on the grill.

While the grill worked its magic, I, at the last moment, decided to throw together a sauce for the side: My first pesto of the summer, which took part of a bulky bag of basil scored from Stan’s Market in the Strip earlier that afternoon for $2. Lacking much garlic on hand, I opted to grate in some lemon zest, in addition to the more-traditional Pecorino, pine nuts and olive oil.

The result? It took a few (five, to be exact) bites of shrimp for me to really grasp what was happening; the texture of shrimp is unlike anything in the vegetarian realm. Pleasantly surprising. Additionally, the shrimp were flavorful without being overwhelming, and the tips of the bok choy turned a bit crispy on the grill. Not a home run yet, but at least I’m somewhere in park.

Just like that, I entered the wide-open world of the omnivore. No more Hitchcock-like suspense building up to meat eating. No more funny excuses to manage my way out of meat-eating scenarios. And, really, no pain.

I’m finding that one of the more surprising parts of this adventure/experiment is not my reaction, the texture or the taste; but, rather, the enthusiastic support coming my way from many directions. Case in point: My older brother offered (!) to make seared sea scallops over beans and greens. For me. He’s obviously worked with scallops a time or two prior, but it was his meticulous preparation that really sealed the deal on my trying his creation, which made the scallops all the more enjoyable.

Perfect grill lines and palm-sized scallops aside, I never imaged that what I really needed to take this plunge were a couple of perfectly clear summer nights for eating outside, a refreshing beverage in hand and some really great people to go along for the ride.