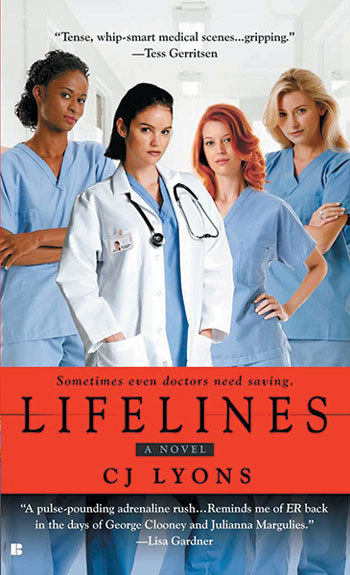 The emergency room, as we all know from television, is a very dramatic, high-energy place. (Oddly, in the handful of times I’ve been there in real life, it’s been pretty quiet, not much going on except really boring television and people waiting, waiting, waiting for their names to be called. Maybe I’ve just gone at the wrong—or is it the right?—times.)

The ER at the fictional Angels of Mercy Medical Center, the setting for CJ Lyons’ fast-paced, action-packed debut novel, Lifelines, lives up to this reputation, and then some.

Lyons’ heroine, Lydia Fiore, is a new attending physician who has just moved to Pittsburgh, bringing tremendous expertise from her last job at an L.A. hospital. On her first day, however, she loses a patient, the son of the hospital’s chief of surgery, and now the father wants her fired.

Turns out the son was a gay-rights activist, and there are people who might have wanted him dead. And before you know it, there are more suspicious deaths, and they seem to keep happening when Lydia is around, which doesn’t bode well for her job. (On the bright side, there’s a very cute paramedic who flirts insistently with Lydia, so the move to Pittsburgh isn’t all bad news. Though given the statistics about single life here, this may be the book’s most unlikely plot point. I refer you to Cathy Day’s book, reviewed above.)

The story moves among Lydia and three other young women in the ER: Amanda, a med student struggling with the demands of her emergency rotation; Gina, a fashionista resident out to prove herself; and Nora, the charge nurse who makes sure things runs smoothly, at work if not in her home life. As events unfold at a rapid pace, the women come to respect and depend on each other, professionally and personally.

CJ Lyons, pen name for a writer-physician who did an internship at Children’s Hospital of Pittsburgh, says some cases in her story reflect her experiences and those of co-workers. Let’s hope that’s limited to the medical procedures; the rest is more drama than belongs even in the ER (though not, perhaps, on “ER”).