The two-bedroom unit on top of the Fairmont hotel has sweeping views of the city, plus access to concierge services, a fitness center and spa. 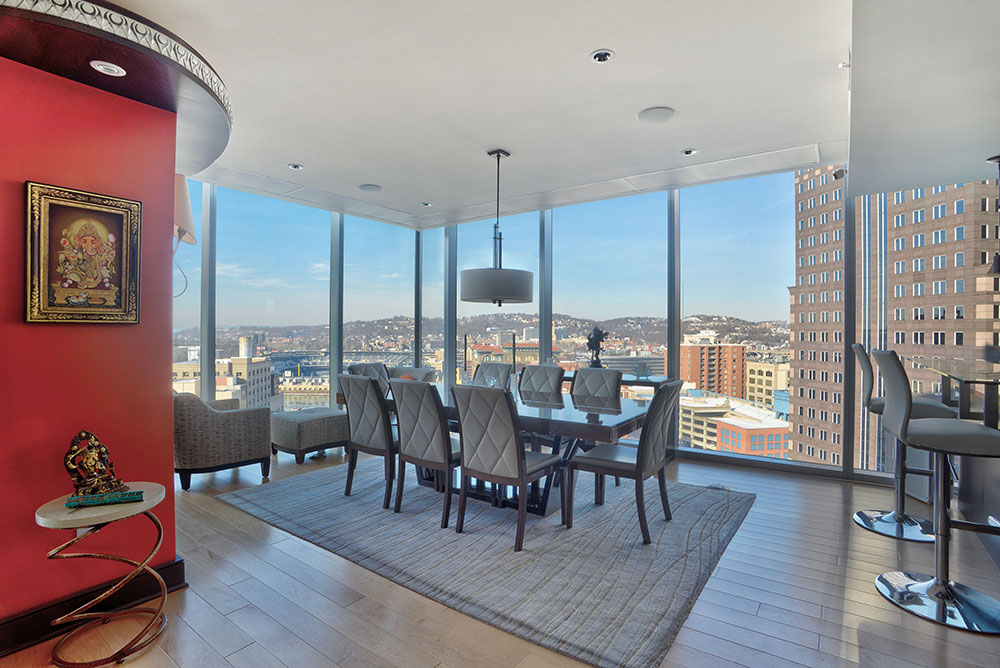 The luxury Fairmont Pittsburgh hotel, located at 550 Market St., Downtown, sits on a triangular slice of a street corner that intersects Liberty and Fifth avenues and also cuts a straight arrow line to another important triangle in the city — the fountain at Point State Park.

It’s also no more than half a mile from Grant Street to the east or PNC Park across the Allegheny River. In fact, many of Downtown’s most popular attractions are within a 5-minute walk from the Fairmont’s front door. 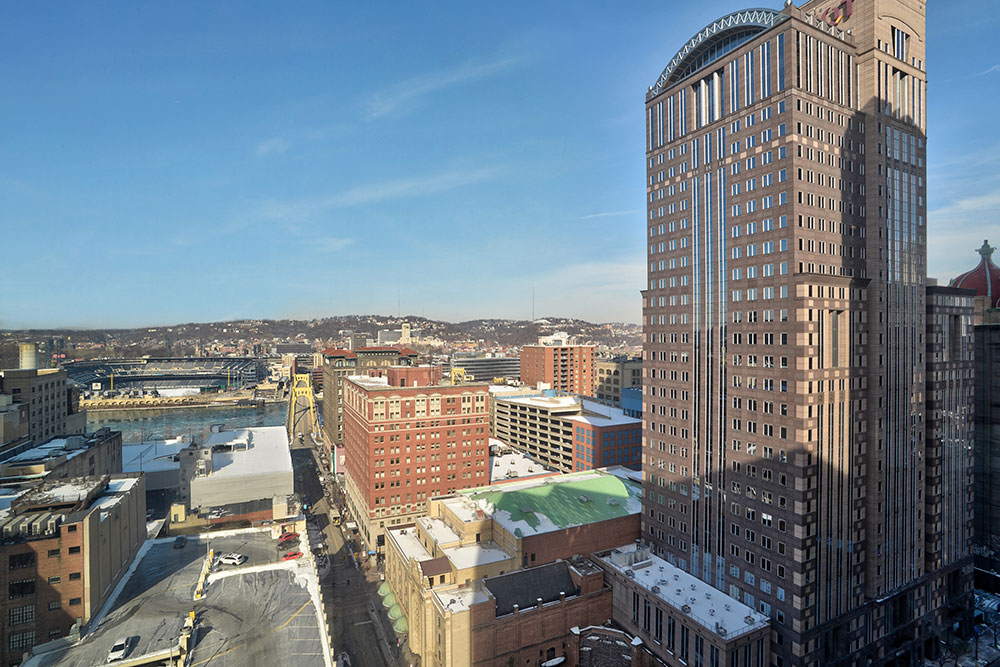 For Dr. Saurabh Sanon, the location and amenities of the building — which include concierge services and highly acclaimed restaurant fl.2 — make it the perfect place to live. The cardiologist’s unit, 14C, is part of The Residences at the Fairmont. Located on the building’s upper levels, the condos sit on top of the hotel’s 185 guest rooms.

“It is fantastic. It’s the nerve center of Downtown. The views speak for themselves — the fireworks, the crowds,” Sanon says. “I am relocating or I would not be leaving.”

As an interventional cardiologist at UPMC, time is a precious commodity for Sanon. He says the building offered every amenity he needed to maximize his lifestyle — and did so at the highest luxury standards.

“I have always lived in larger cities,” he says. “The Fairmont in Pittsburgh embodies a level of international condo living that is found in the best cities in the world.” 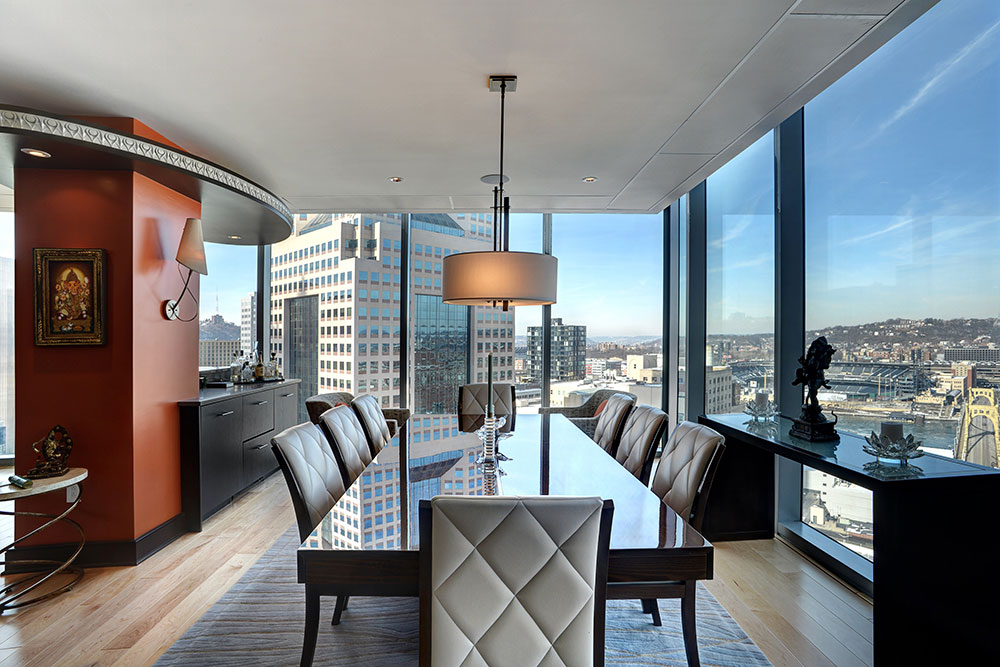 He has listed the 14th floor condo for $1.45 million (MLS#1557260, Racheallee Lacek, Piatt Sotheby’s International Realty, piattsir.com). It is open by appointment.

Featuring an open-concept layout, the unit has two bedrooms and 2½  bathrooms. Facing north, it has panoramic views of the Allegheny River and PNC Park. It also has one of the coolest interior views of city buildings you will ever find, including of the upper levels of Fifth Avenue Place; the building’s façade appears like a canvas in the unit’s 10-foot-tall, floor-to-ceiling windows.

After entering the white marble lobby complemented by glass walls and dramatic vistas, elevators lead to the condo through a secure, locked-access fob. Inside are two large pillars with architectural round bulkheads that define the space and add interest to the carefully appointed seating areas. 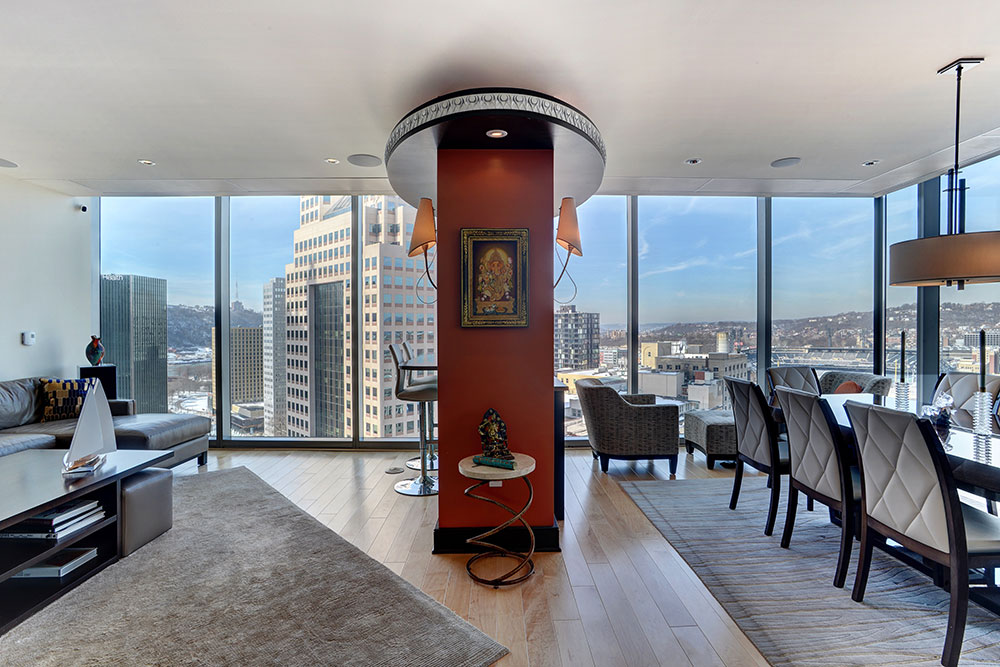 The entire unit is wired with integral speakers. Smart-home technology controls everything from the lights, sound and audio to the automatic Lutron window shades.

The kitchen features high-end appliances from Wolf/Sub Zero and AKSO. Black cabinets with a mix of slab doors and glass fronts create a modern feel. Keeping the room from appearing too cold is a small support pillar painted a light earthy green. There’s also a peninsula featuring a cantilevered glass bar for guests.

The other side of the room features another support wall with a bulkhead. This one has been smartly outfitted into a bar on one side, complete with a wine refrigerator and a serving buffet for the dining area.

“It is my favorite little seating area and overlooks PNC Park,” Sanon says. 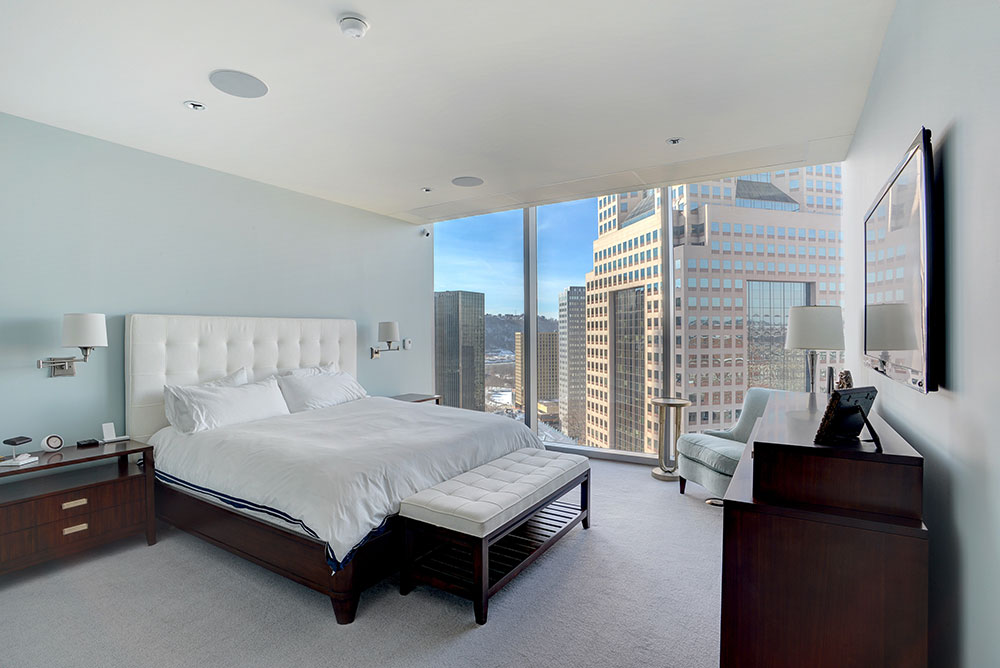 The roomy bedrooms each have a panoramic view, plus ensuite bathrooms. The primary bathroom has a double vanity sink, modern wall sconces and a tile backsplash wall. A separate soaking tub and shower featuring a rainshower head and a secondary showerhead complete the vignette. The attractive second bathroom has a tub/shower combination.

Sanon says the unit comes with plenty of amenities, among them access to the business center, all-hours fitness center and a spa. The building also has a doorman, concierge services and 24-hour room service.

“I am welcomed into the lobby every time I come home,” he says. “The valet service takes my car and my groceries and then they deliver them to my door.” 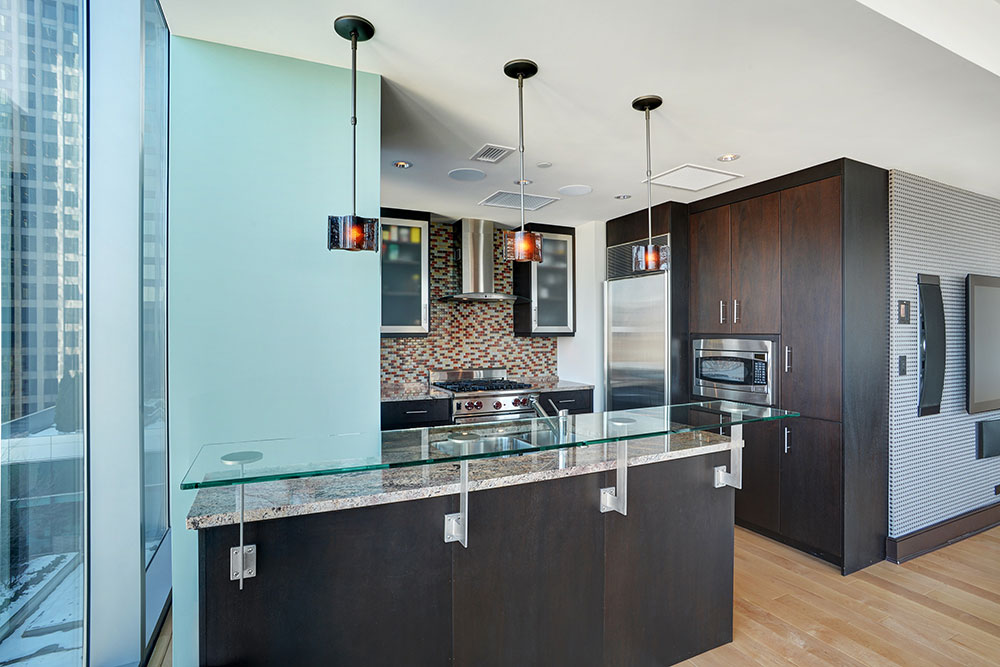 The building is pet-friendly, and the hotel once had one of the canine ambassadors that the Fairmont brand is known for. Sanon adds that having a hotel adjacent to his home was another convenience.

“My family visits and stays in the building,” he says. “I drop my dry cleaning off at the front desk and it comes back to you. The concierge is wonderful and handles many things, from valet for my car to entertainment requests.”

About: Downtown (downtownpittsburgh.com)
Population: 5,201 (Golden Triangle only)
Planes, Trains & Automobiles: A 25-minute commute to the airport. Daily transport via Port Authority bus. Rideshare available. Street parking.
Schools:  City of Pittsburgh Public Schools.
Neighborhoods: The heart of Pittsburgh, Downtown features a variety of theaters, restaurants and bars. Point State Park and the Great Allegheny Passage Trail Head also run along the riverbanks. The city’s number of residents is growing and a Target store opening this summer is expected to strengthen the city’s residential appeal.