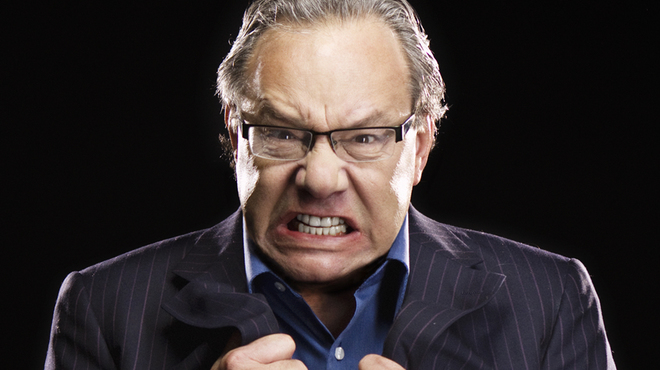 Lewis Black Set to Rant & Rave at Heinz Hall
In the world of stand-up comedy, Lewis Black is a unique case: He’s gray and bespectacled, and speaks with elder authority. He’s ornery and crass, but he’s also incredibly endearing. Plus, he may be the only major comic who started out as an underground New York playwright. Oddly, Black says he never writes down his jokes; he claims every stage performance is an improvised monologue. The “Daily Show” favorite and self-described socialist arrives in Pittsburgh to deliver his singular brand of political rant and observational humor. He’ll perform his latest set, “The Rant is Due,” Saturday at 8 p.m.

Whatever "The Sillies" Are, You May Now Get Them Out
“Yo Gabba Gabba!” took the world of preschoolers, parents and indie-music fans by storm when it premiered live on Nickelodeon in 2007. Since then, DJ Lance Rock (Lance Robertson) has been jumping, shaking and shimmying “the sillies” out of viewers by teaching life lessons with beat-driven messages and colorful characters.

The 2013 “Yo Gabba Gabba! Live! Get the Sillies Out!” tour launches a new DVD/CD collector’s edition and new lines of toys and ever-useful kids sportswear … not to mention the show’s first official beverage. But you can feel alright about buying the goods — $1 from every ticket sold goes toward environmental sustainability.

DJ Lance Rock and cast bring the show to Pittsburgh tomorrow, with performances at 3:30 and 6:30 p.m.

It's (Finally) Time for Beer and Hockey
After the most protracted, juvenile negotiation process this side of Congress, the NHL and NHLPA have finally decided on terms conducive to actually playing some freakin’ hockey already. And that means history’s shortest bout of Penguins training camp is upon us. The chief training facility of your Pittsburgh hockey club is the Iceoplex at Southpointe. The BLVD Pub and Kitchen occupies the same structure as the Iceoplex, but it isn’t just down the hall; one (glass) wall of the restaurant actually looms over the ice itself. For tips on getting a beer and a burger while watching the Pens prepare for another season, check out this week’s edition of After Dark!

In Theaters: New movies coming to Pittsburgh this weekend include the heavyweight Oscar favorite Zero Dark Thirty, from Kathryn Bigelow; campy, swingin’ crime caper Gangster Squad, with an all-star cast led by Sean Penn and Josh Brolin; and the patently unnecessary Paranormal series spoof, A Haunted House. PM Film Editor Sean Collier will appear on the 102.5 WDVE Morning Show Friday at 7:15 a.m. to review Zero Dark Thirty and Gangster Squad; he would’ve seen A Haunted House, but life is just too short. Tune in to 102.5-FM or DVE.com to hear Sean’s reviews!

Don’t forget to enlighten yourself in 2013! The Pittsburgh Symphony Orchestra and BNY Mellon present Dvořák's Seventh on Sunday at 2:30 p.m., conducted by Gianandrea Noseda and introducing Italian cellist Enrico Dindo, as an ode to Czech culture. Click here for tickets.