After making an innocent observation about game-day attendance on Twitter, the Pirates pitcher was met with a deluge of tweets. 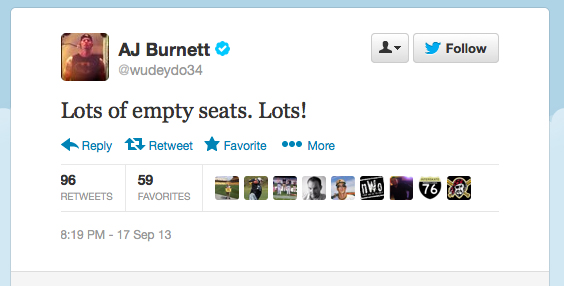 With one tweet commenting on the empty seats at PNC Park last night — during a division championship race and on Clemente Day, no less — Pirates ace A.J. Burnett gave local sports talk-radio a gift-wrapped controversy. He even tied a bow on it with a little card that says, “For you. All my love, A.J.”

Now, before you claim that I’m an A.J. Burnett apologist, you should know I was one of those who wasn’t too pleased when he lost his cool last week on Clint Barmes in the dugout. In fact, I called it a Tom Brady move — and if you know how I feel about Tom Brady, you know I’m basically telling A.J. he was acting like a spoiled child upset because he got Cheer Bear and not Funshine Bear for Christmas.

Am I an A.J. Burnett fan? Oh, yes. I’m always a fan of the guys in the clubhouse who don’t have an ounce of apathy over this team — guys who care so much about winning and bringing us out of the ashes of decades of doom that they wear their passion and anger about it on their sleeves.

That’s why I fell in love with Doug Mientkiewicz. If you’re a new fan of the Buccos and aren’t aware of him, Doug came in a few years ago and brought leadership to the clubhouse as a utility man. He talked about winning, not rebuilding. He fired up the young guys. He got mad. He yelled. He fought. He didn't sugar-coat anything. He loved the team, and he wanted something more than complacency from them and the fans. In fact, one time, enraged, he charged the pitcher’s mound … at Randy Johnson. It was beautiful. I could write a book of poetry about it. It would win awards.

A.J. is much like Doug. He’s older and wiser, and in this, the twilight of his career, he wants to win … badly. He wants it probably more than we can really understand unless we’ve played professional sports. He scowls. He’s abrasive. If you stick a cigarette in his mouth, he looks like he could play the movie character who does the dirty work for the mob boss. He’s no delicate flower, that’s for sure.

In addition to his belief that everyone should just sit down, A.J. also has been adamant about wanting PNC Park “packed.” Packed. He talks about it on Twitter before and after every game. He encourages the fans to come out and talks about how such an electric atmosphere helps the team psychologically. Every sellout, he commends the fans for showing up and doing their part. He tells them, “Good job!” He hashtags things with #PackPNC. He tells us tomorrow is another game and let’s do this again. He tells us to STFD, but he means it with love.

So last night, the place wasn’t packed. In fact, surprising for such an important night, there were quite a few sections of empty seats. Based on the collective reaction from Twitter users, you’d think he tweeted things like, “Way to not show up, guys. You suck.” or “Terrible fans. Who needs you?” or “YOUR MOM.” In truth, he made an observation about attendance like he has been doing since he jumped on the #PackPNC bandwagon.

If the man throws a bad game, he hears about it from some fans. They will not sugar-coat it because Twitter hates sugar-coating; it’s allergic to it. They will call him names. Call him old. Tell him to STFD. But the second A.J. turns around and looks at those same fans and says in essence, “Hey. Lots of empty seats out there tonight. Let’s do better,” Twitter falls down and sucks its thumb in offense. Then it stands back up and starts screaming about stupid Funshine Bear.

A.J. wasn’t even pitching last night; this wasn’t a selfish thing he was moping about. This was him wanting better for his teammates who took the field. He wanted more from us … for THEM. 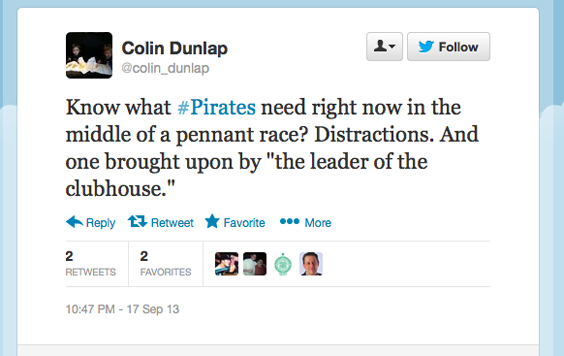 It was one tweet, making an observation about attendance in an effort to encourage more fans to come out to the games as each one becomes more important than the last.

The only reason it’s a distraction now is because of thin-skinned fans and mountain-making sports pundits who saw the molehill and said, “Well, this won’t do at all.”

Stop picking nits and remember this: We are family.