Learning How to Save Lives With Advanced First-Aid Training

Stop the Bleed training, spearheaded by UPMC, aims to prepare first-responders (and the general public) to jump into action when seconds count. 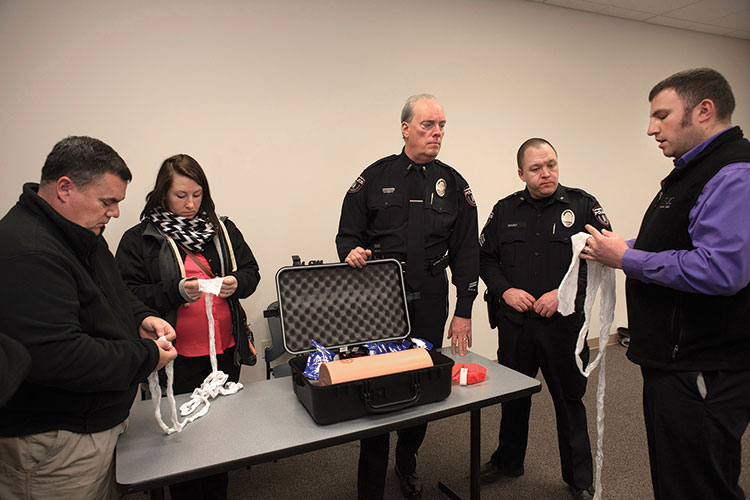 Individuals are trained to prevent severe blood loss at Stop The Bleed Training at the Monroeville Public Safety Training Center. UPMC partnered with the FBI and the Jewish Federation of Greater Pittsburgh to provide Stop the Bleed Training to law enforcement officers and other organizations | photos by Martha Rial

You’re enjoying a meal at a restaurant when another diner nearly upends the table as he grabs his throat. He’s choking, but you know what to do — the Heimlich maneuver.

Out for a walk, you wave to your neighbor just as he collapses. You hoped you’d never need to use the procedure, but you spring into action: check for breathing, check for a pulse, begin chest compressions. Just as you learned in CPR training.

Driving to the store, you witness a car accident and realize the driver is bleeding in the mangled wreckage. She might survive if she makes it to the hospital, but without immediate help she’ll die at the scene.

Do you know what to do to save her life?

Stop the Bleed, a program spearheaded by UPMC, trains bystanders, law enforcement officials, teachers and others in four states to learn the basic first-aid skills needed to intervene when someone is experiencing severe blood loss.

Through the next three years, the $1.3 million program will spread the message that everyone can save a life — and teach bystanders how to help everyone from shooting victims to wounded hikers to downed motorcyclists. The public-health campaign is part of a national effort announced by the White House and the Department of Homeland Security in November 2015; UPMC’s program provides training in parts of Pennsylvania, Ohio, West Virginia and New York. 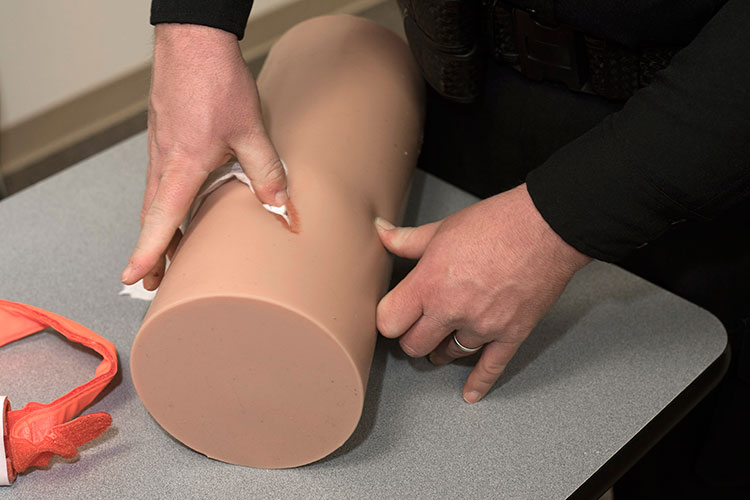 “We want to make bleed-control training as common as CPR training,” says David Bertoty, clinical director of trauma and emergency services at UPMC Presbyterian. “Bleeding to death is the number-one cause of preventable deaths in traumas.”

In mid-March, 116 law enforcement officers from 15 different agencies based in western Pennsylvania received training in a session in Monroeville hosted by UPMC, in partnership with the FBI and the Jewish Federation of Greater Pittsburgh.

Because they frequently are the first help to arrive on the scene of car accidents and shootings, the police were instructed to apply pressure to a victim’s wound as soon as the scene is safe.

“A person with life-threatening arterial bleeding can die in as little as three minutes,” says Dr. Matthew D. Neal, a trauma and general surgeon at UPMC Presbyterian. That doesn’t leave much time to waffle about whether or not to act. If in doubt, grab a shirt or a piece of cloth, place it against the wound and apply direct and steady pressure to the wound with both hands, he says.

“If you see bleeding and it looks bad, just do it. Nothing we will teach you will cause any harm,” Neal advised the officers. “Direct pressure is always the right answer.”

If pressure doesn’t stanch the blood flow, the surgeons advised the police officers to stuff gauze into the bleeding wound itself in the case of wounds to the neck, armpit or groin. (Without immediate access to sanitary gauze, they are taught to use whatever type of cloth is available.) For wounds on extremities, a tourniquet is the best method of immediate treatment.

Because hands-on practice could save precious seconds in a real emergency, Philip Rozic, an EMS specialist with UPMC, coached participants through the process of stuffing special gauze into an “injured” prosthetic arm.

“This is good stuff,” says Joseph Meyers, a lieutenant with Carnegie Mellon University Police and a former Pittsburgh Police homicide detective, after he completed hands-on training. “Unfortunately, this is the world we live in now. We are the first ones at the scene. We have to be prepared to do this. You can’t wait for the ambulance.” 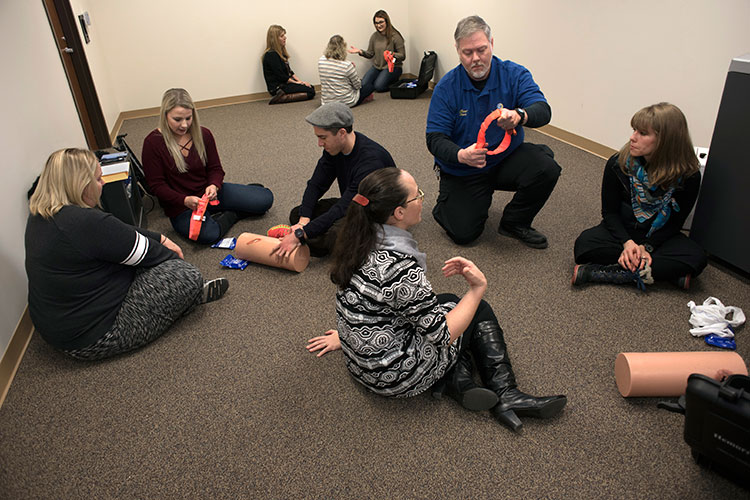 Meyers and others also were shown how to apply a tourniquet if a person is losing blood from a wound on the extremities. Police officers went home with their own tourniquets, now prepared to use the technique on victims as well as themselves.

The simple tool can have a drastic impact on survival. Bertoty, a nurse at UPMC, points to the early years of the Afghanistan and Iraq wars when soldiers frequently bled to death after being hit by an explosive device or roadside bomb. Now that the military requires soldiers to carry tourniquets, the survival rate has risen sharply, he says. “Early in the [Iraq] War, if you were hit, you were basically dead,” he says. “Now you have a much better of survival through self-rescue and Stop the Bleed techniques.”

The current UPMC plan is to put a tourniquet on the belt of every law enforcement officer in Pennsylvania by August 2019.

“The techniques are pretty simple. I’ve taught my 10-year-old daughter how to put on a tourniquet,” says Dr. Raquel Forsythe, associate medical director of trauma surgery at UPMC Presbyterian. “Knowing simple techniques can make the difference. That can make people more willing to jump in.”

School administrators, who often work with staff to plan for worst-case scenarios, see Stop the Bleed training as a way to better prepare teachers for unpleasant possibilities.

“You teach them Stop the Bleed, and they feel empowered,” Forsythe says. “If the worst thing happens, they are prepared to help in terms of bleeding control.”

The program was started by Dr. Lenworth Jacobs, the director of trauma at Hartford Hospital, the Level 1 trauma center closest to Sandy Hook Elementary School in Newtown, Conn., where a gunman fatally shot 20 children and six adults on Dec. 14, 2012. “The hospital went on alert for mass injuries,” Neal says. “They waited and waited and waited, and no one came. A number of kids died from preventable blood loss.” After research following that tragedy, the American College of Surgeons decided to mount a public campaign intended to make everyone a first-responder.

Immediate first-aid care helped to prevent mass carnage at Franklin Regional High School on April 9, 2014, when 20 people were stabbed and slashed. All of them survived; the students, teachers and staff who stayed with the victims and put bleed-control techniques into action have been credited with saving lives.

Nursing students also are learning how to teach others basic first-aid techniques in bleed control. Robert Morris University is the first nursing school in the area to teach Stop the Bleed to students as part of its senior-level community nursing course.

Janice Sarasnick, assistant professor of nursing at the university, has completed a UPMC trainer course and has taught the techniques to the senior-level students. Those students, in turn, can help her conduct Stop the Bleed classes to spread the skills of applying a tourniquet and bandages to people in the community.

“My goal is to expose RMU nursing students to educational opportunities that will benefit the community,” she says. “They may be called into action at an accident scene. Students can also go out and discuss Stop the Bleed with the people they know. It’s not a one-and-done type of class. That’s the cool thing about the program.”

This article appears in the May 2017 issue of Pittsburgh Magazine.
Categories: Medicine and Health Features