Cigar novice? Visit Sammy Sing at The Cigar Den for a crash course and a relaxing time. 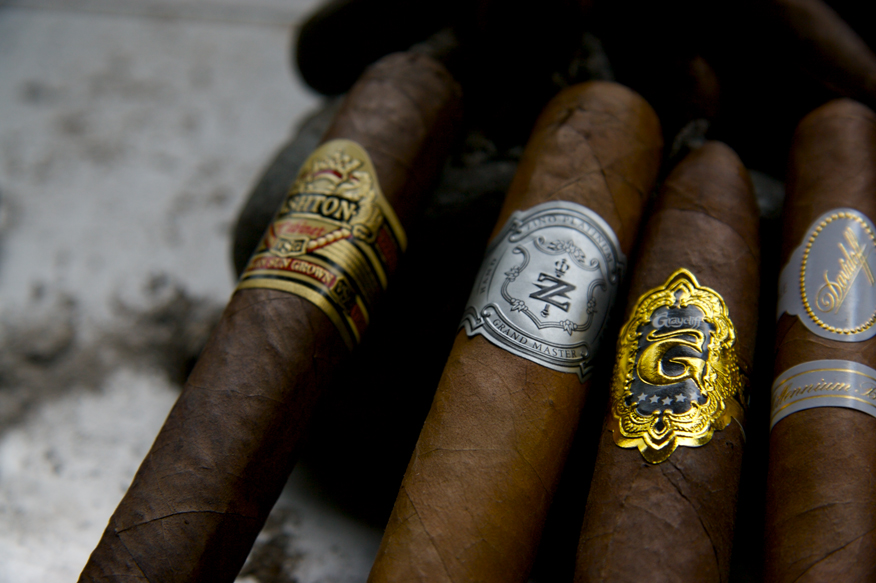 I know very little — we can comfortably say nothing — about cigars.

On the few occasions where I’ve accepted one out of politeness, I’ve feebly attempted to imitate the behavior of a knowledgeable neighbor. How do you light it like that? Why isn’t mine burning like that? How am I supposed to hold it? Am I supposed to inhale deeply? OK, now I’ll be coughing for the next seven minutes. Great.

Some people just assume you’re proficient, which is weird for a hobby that’s been pushed to the fringes. Cigar appreciation has a lot in common with its frequent running buddy, golf — practitioners and professionals assume you know what you’re doing, and if you don’t, they frequently don’t have time for you.

At least that was my experience until I walked into The Cigar Den in Lawrenceville. It’s a cigar shop and lounge converted from a Lawrenceville house, remodeled and furnished with recycled items and stuff from other local businesses. Owner Sam (Sammy) Sing opened the place in 2012 after 12 years as a driver for UPS; he bought hyperlocal because he wanted it to recognizably be a part of Lawrenceville from the moment he opened the doors.

Sing is the polar opposite of a cigar elitist. When I confessed that I was a novice and didn’t even really know where to begin, he walked me into the store’s humidor and gave me a crash course on country of origin and style; by the end of my visit, he was getting into detail on tobacco leaves and manufacturers. After helping me select a (very mild) cigar, he showed me the best way to cut it, patiently walked me through the proper way to light it and walked me to one of the store’s upstairs rooms, where he offered advice on how to enjoy it without giving myself a coughing fit.

While The Cigar Den has plenty of amenities, it’s clear that the building once was a home — in the best possible way. The front room (with the cash register and humidor) is the center of activity, as visitors smoke and converse. Beyond that, though, is the kitchen; The Cigar Den is BYOB, and Sing will lead you back to the kitchen to produce glasses for your beer, ice for your liquor or whatever else you might need. There’s a back patio with a grill; if you show up with burgers or steak, you’re free to buy a cigar and get cooking out back.

Upstairs, one room hosts a card table and another is set up for quieter conversation; buy a box of cigars, and the upstairs is yours exclusively (provided you clean up, one of The Cigar Den’s two rules — the other is the simple requirement that you make a purchase there, rather than bring in your own cigar). There are no membership fees or cover charges at The Cigar Den, and most of the offerings are in the $5-10 range; it’s a neighborhood spot, not a VIP lounge.

My visit was one of the most relaxing afternoons I can recall. Walking out, I didn’t feel like I was leaving a bar or club; I felt like I had just had a massage or meditated. The Cigar Den is a place to clear one’s head, with none of the pretension (but all of the service) of an exclusive smoking room. I don’t know how often I’m going to want a cigar. But when I do, this is where I’ll buy one.