Lawrence Timmons Will Turn Out Your Lights

Get to know the man at the heart of the Steelers’ defense. 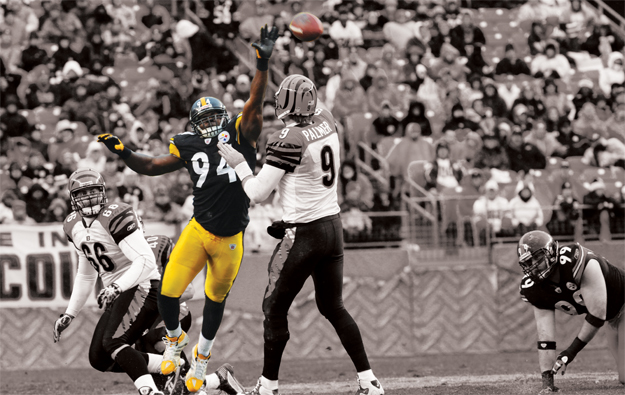 Maybe Lawrence Timmons was born to wear black and gold. Maybe he was predestined to be the beating heart of the Steelers’ defense, to lurk in the middle—the beat once patrolled by Hall of Famer Jack Lambert.

Even as a senior at Wilson High School in Florence, S.C., Timmons was already playing Steeler football. He was ranked as the top receiving recruit in the state, but Timmons played both sides of the ball and had a soft spot for smash-mouth. And like the lineage of great Steelers linebackers before him, he did not take kindly to losing.

“It was the end of the lower-state championship game, and we had no hope of winning,” Timmons remembers. “We had the ball and coach called a sweep to run out the clock. I guess I was just mad at the world.”

Timmons was supposed to block a puny cornerback, bow his head and accept defeat. Instead, he turned his sights to the opposition’s star linebacker, churned his legs like a runaway locomotive and single-handedly crashed the victory party.

“It was one of the hardest hits I’ve ever witnessed,” says Wilson High coach Darryl Page. “Lawrence knocked the guy’s cleats over his helmet.”

The air went out of the stadium. The woozy linebacker uprooted himself from the sod and stood up, flailing like a dancing balloon on a used car lot. One step, two step … drop. He made a snow angel in the mud as time expired. A few teammates jumped around in half-hearted celebration. Most just looked around awkwardly.

“The game was over, and this guy was completely out,” Timmons says. “ The teams huddled up, the coaches gave their speeches, the players saluted the fans and the guy was still laying on the field.”

Timmons finally lets out a smile. “I went out like a champ.”

The story is right at home in the hard-boiled mythology of Steelers linebacking. But Timmons, soft-spoken off the field with his hat tipped low, is not a household name like the great Lambert. Despite leading the team in tackles last season (with 135) and signing a new five-year, $50 million contract this summer, Timmons is so underrated that the sixth result for him on YouTube is a clip of his 5-year-old son, Lawrence Jr., dancing on top of a Big Wheel.

Yet on Sundays, Timmons becomes the faceless blur roving edge to edge on your TV screen, the all-consuming black hole swallowing up running backs, the rabid dog diving headlong into a leaky hole. He may still have all his incisors, but Timmons embraces the unglamorous grunt work that made Lambert a legend in this town. He just might be the next one.

Pittsburgh magazine sat down with Timmons to talk about family, controversies and squealing quarterbacks. 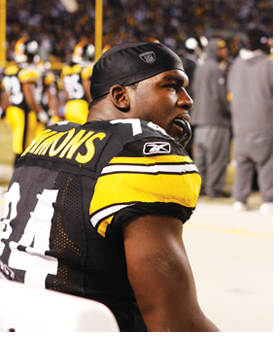 You were Mike Tomlin’s first-ever draft pick. Do you guys have a special relationship?
Oh, we definitely have a strong bond. I came in to the league at 20 years old, so he obviously looks at me like a son. Maybe he’s tougher on me because of that. He just wanted me to go through the fire—to go through the wars. But now that I’ve grown up in the system, you can tell he has that proud dad look. During my first year as a starter, I was in his office every week talking to him about anything and everything. It was his first year as an NFL coach, too, so we kind of grew up together—and I think we’re closer because of it.

What lights a fire under you on the off-days? And what keeps you motivated?
Everybody on this level has it all. A lot of people don’t realize [that] making the transition to the pro game is more mental than physical. You know, I was really close with my grandmother. She passed away when I was in my second year here, and that was really tough for me. But one thing she taught me was the importance of consistency. You’d see this old lady working in her garden every day—no matter if it was rain, sleet or snow. So I try to be like her, working on the little things every single day and, most importantly, staying humble.

Rumor has it you’re hungry for 10 sacks this season.
Double-digit sacks is definitely a big goal for me. I feel like I did a good job against the run and the pass last year, but I dropped the ball a little bit on the sacks. In 2009 I had 7. Last year I had 3.  You can’t go from 7 to 3 and be happy with yourself. In order to be a top tier linebacker, I need to be great in all areas.

Who’s the player you get the most satisfaction out of tackling?
I’ll say Ray Rice; he’s like a tree stump.

Who’s the toughest guy to bring down?
My man from Cleveland, Peyton Hillis.

Have you ever made a quarterback squeal with a hard hit?
When we played New England, I got Matt Cassel pretty good. I definitely took some football out of him. He got up screaming, like, “Who the bleep was blocking the back side?!” And then he made some crazy noises.

What did you think of James Harrison’s comments about Ben Roethlisberger in Men’s Journal this summer?
I obviously thought the controversy was a bit fabricated. I was at Ben’s wedding with James. He loves Ben to death. Everybody in the locker room knows that’s just how Deebo is—he jokes around. He gives it to me a lot, too. I still love him.

Does Harrison really only watch cartoons, or is that an urban legend?
I think it’s true. I go over to his house quite a bit and he’s always got cartoons on.

Who’s the best linebacker in the NFL?
Outside: James Harrison. Inside: Patrick Willis.

Who’s the most underrated player on the Steelers?
Antonio Brown. He’s giving us problems on the practice field. That guy is the total package. He can block, run routes across the middle and blow the top off the defense.

What’s one thing you love to do that people would be surprised to know?
I love to snowboard. I’ve been all over: Seven Springs, Aspen, Killington. I’ve got a Lib-Tech board, matching outfits, everything.

Have you ever wiped out?
Oh, for sure. I hate the busy days because you’ve got all the little kids in front of you. Can’t fall in front of the kids, man.

This article appears in the October 2011 issue of Pittsburgh Magazine.
Categories: From the Magazine, Steelers