Laugh in the Face of Tryptophan 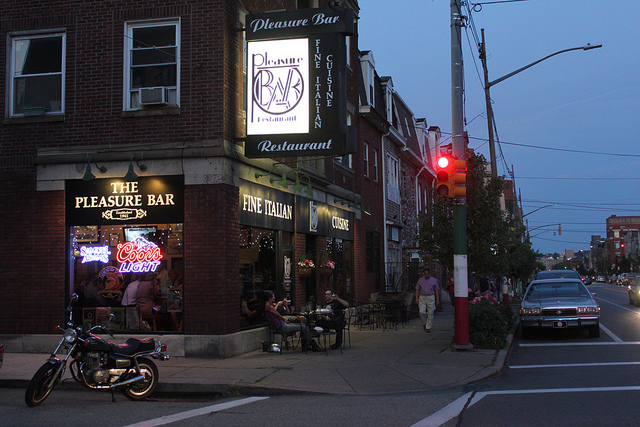 Thanksgiving can be a perfect storm for nightlife. Everyone flocks back home to see family and friends. Most people have at least a four-day weekend. Plenty look for an alternative to madcap, frantic holiday shopping. And at some point, you and your loved ones may want to actually go do something, rather than continuing the endless loop of reheating, eating and groggily digesting.

It’s the reason why movie theaters are sold out and bars — especially on Thanksgiving Eve, the de facto “See People From High School” day — are packed. You can usually find a pretty good comedy show during the holiday weekend, too.

This being the city in the midst of an unprecedented comedy boom, you can find three.

Comedian and actor Aaron Kleiber — voted best comic in Pittsburgh in our 2012 Best of the 'Burgh Readers Poll — has put together a trio of shows that highlight the growth and diversity of Pittsburgh’s stand-up scene. Kleiber will host all three, starting with a Wednesday night show at The Beerhive, headlined by WDVE Morning Show regular Mike Wysocki. (Full disclosure: I’ll also be appearing on that show. Please forgive the de facto self-hyping.) Friday night sees a showcase of up-and-comers take the stage at Bloomfield’s Pleasure Bar. And Saturday, some of the city’s more daring voices will grab the mic at the Nothing Sacred Comedy Show at Ironworks in South Oakland (formerly the Hideout.) Wednesday and Friday are free; Saturday is a mere $5.

“All three of these shows are very different,” Kleiber says. “The Beerhive show, featuring established guys,” also including longtime local pro Tommy Kupiec, “there’s a show where you’ll have fun, with some guys that are definitely going to make you laugh.”

“Friday is a showcase of new guys, with a pro closing it.” That lineup features standout rookies Isaac Kozell, Ed Bailey and Day Bracey, along with headliner Terry Jones. “That’s the whole idea of a showcase — to get new guys up there that you may not have heard of, and give them a chance to do a show in front of a spotlight,” Kleiber explains.

Nothing Sacred — a recurring event — stars Alex Stypula (winner of the 2012 Pittsburgh Gilda Radner Great Comic Search,) Shannon Norman, John Winters and Tim Ross. Robert X, who made waves with a long stretch of absurdist performances on local stages before departing for Philadelphia earlier this year, will also return for the show. “There are guys in town now that are really good, but don’t have a shot to do ‘normal’ shows — they’re a little raw, they’re a little dirty, they’re a little nuts,” Kleiber says. “And that’s what the Nothing Sacred show is about. I like to show love to those guys, because I think they’re really funny.”

“The fact that we can do three shows in a week — and they can be very different shows — that exhibits that there’s a lot of good comedy in Pittsburgh,” Kleiber says. The variety isn’t to be taken for granted. While stand-up has always had a foothold here, quality once easily surpassed quantity. Today, comics fight for stage time. Every night of the week boasts a different well-established stand-up open mic, with new rooms popping up multiple times a year. Demand for stage time is so great that a normal event will often have dozens of performers vying for the mic, and desire for the finished product has grown to the point where showcases and all-pro shows are scattered throughout western PA on a weekly basis.

“People from other towns where I perform can’t believe that there are six-to-seven regular open mics in Pittsburgh,” Kleiber says. “That’s up there with a lot of decent comedy towns, and now I think we’re starting to see the fruit of those mics.”

So this weekend, feel free to ignore the empty promises of the nearest Black Friday bonanza, neglect the leftovers for a few hours and hit a cool bar for a great show. I’ve mentioned many times before that the comedy boom in Pittsburgh is experiencing unprecedented growth and diversity; what’s rare is the opportunity to see the full breadth of the scene in a few days for next to nothing. Take your friends, take your family — start a Thanksgiving tradition. The way it looks, you’ll have plenty of choices to make it an annual event.

Check out Pittsburgh Comedy for full details and showtimes.