Last in the Water But First at the Finish Line

Penn State Behrend swimmer Mia Pietropola’s deafness may give her competitors an advantage at the starting blocks. She beats them anyway. 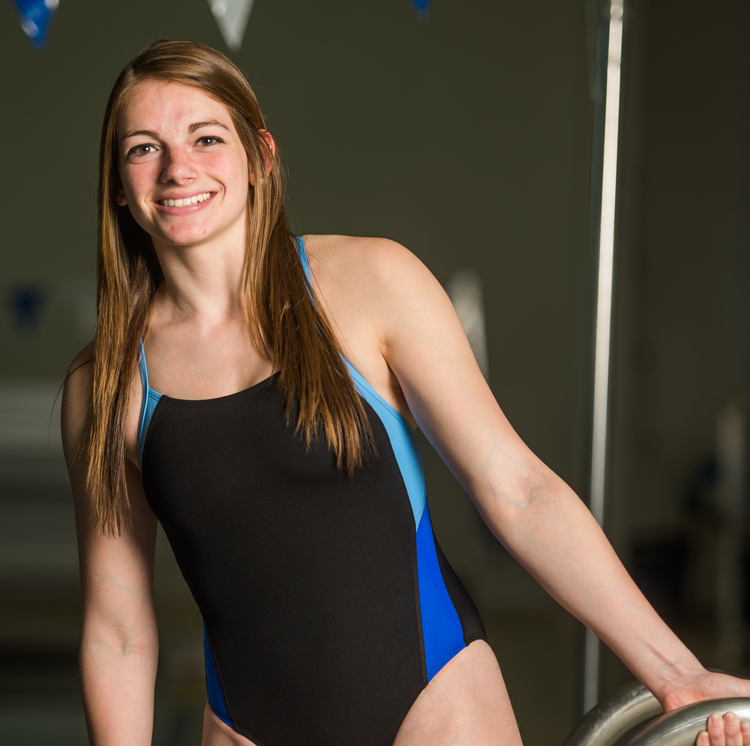 Despite acoustics in some natatoriums that could make a sneeze sound like a power saw, competitive swimming is by its nature a solitary sport. Swim caps, goggles and heads that are at least partially submerged plunge swimmers into a measure of sensory deprivation, even before they snap on the mental blinders of deep focus.

Maybe that helps to level the playing field for 21-year-old Mia Pietropola, of Plum, who is deaf.

“In my head, I get very pumped up and am constantly screaming at myself, ‘GO, GO, GO!’” Pietropola writes in an email interview.

Pietropola was named the Allegheny Mountain Collegiate Conference swimmer of the year at the conclusion of her sophomore season at Penn State Erie, The Behrend College.

At the AMCC championships, held Feb. 12-14 at Grove City College, she led the Lions to their eighth team title with a trio of record-setting times. She repeated as the 200-yard breaststroke champion in a conference-record time of 2 minutes, 25.93 seconds; repeated as the 200 individual medley winner in 2:10.31, also a conference record; and swam a leg of the winning 200 freestyle relay, which set another AMCC mark, 1:40.41. 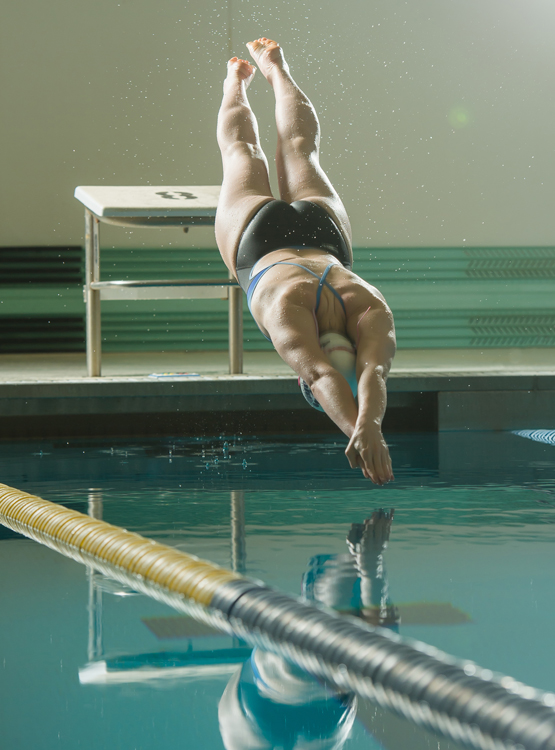 As Penn State Behrend Coach Jen Wallace notes, once swimmers are in the pool, “It’s you and the water and the wall. The only things that you have are your own thoughts to push you. That’s something that Mia deals with on a daily basis.”

Pietropola was born profoundly deaf. At age 3, she received a cochlear implant. Her mother, Nancy, explains that with the implant, her daughter has a hearing range of about 35 decibels. That generally includes most human speech but not always lower background noises or voices over the phone. Pietropola speaks, even though a specialist nearly 20 years ago declared that she never would do so.

She still relies a lot on reading lips, a skill she developed at DePaul School for Hearing and Speech in Shadyside. That’s crucial during practices and meets because she must remove the external component of her implant to swim.

Pietropola was active from a young age — dance, gymnastics, basketball, soccer. At 12, she was devastated, Nancy Pietropola says, when she was advised to avoid sports for at least a year because of a knee problem. A neighbor suggested to her parents that she instead try swimming, a non-impact sport. Her doctor agreed.

It worked out so well that swimming became her year-round sport.

Now, her swimming career is about to take a turn. As with many students who spend two years at a Penn State branch campus, she plans to transfer to the Penn State main campus in University Park for the upcoming school year. There, it is unlikely she will make the jump from NCAA Division III swimming to Division I. She hopes to join the bigger school’s club team. It’s a decision with which Pietropola is comfortable.

“I am so glad I picked Behrend, and it is very tough leaving here because I have made such great friends and have a close-knit swim family here,” she says. “I was very satisfied with my Behrend swimming career because I achieved my athletic goals.” 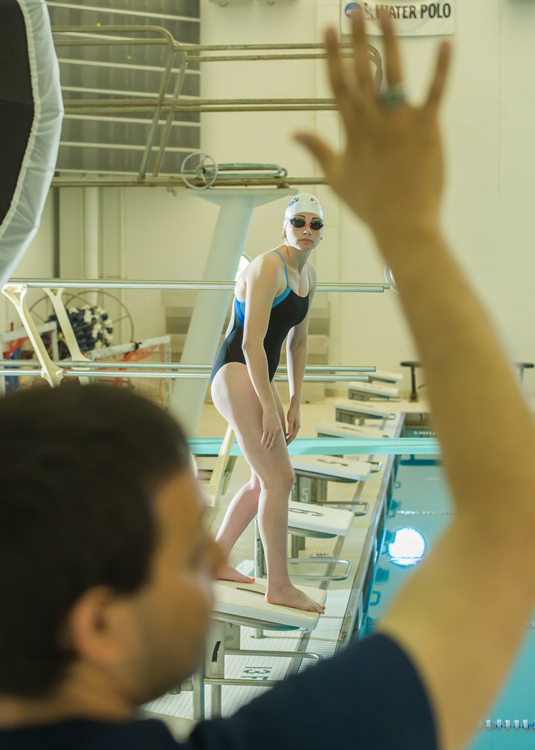 Those goals came despite her disability imposing a small price. At the start of a race, Pietropola turns her head to get a “go” hand signal, while the others react to sound — usually making her the last into the water.

“The reality of it is, swimming is measured in hundredths of a second,” says Shawn Haupt, who coached Pietropola at Plum High School, where she helped to set a school record in the 200 freestyle relay. “She knew she was going to enter the water last. But she worked hard and made up for it on top of the water and on her turns.”

Being deaf has upped Pietropola’s determination factor. At Plum, she was a four-year letter-winner not only in swimming but also cross country and track. Beginning as a freshman, on her own initiative, she met with her high-school teachers at the start of the school year to give them a primer on having a deaf student, complete with a PowerPoint presentation she assembled herself.

So being the last off of the starting blocks? Meh. 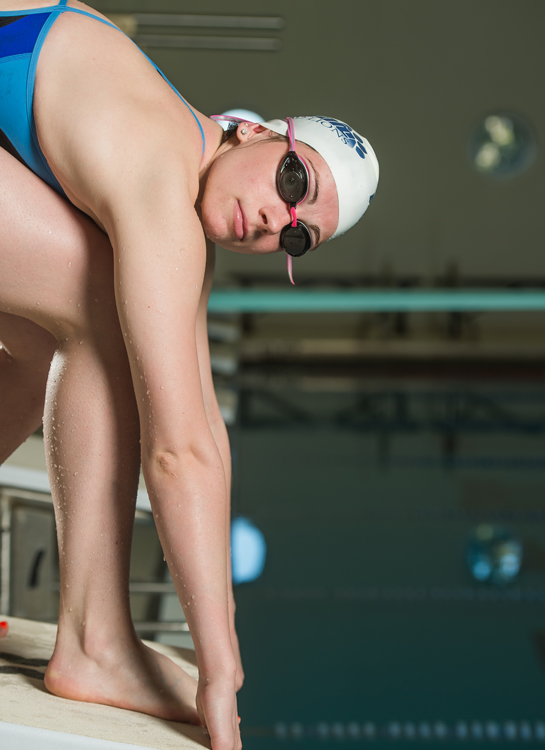 “I had no choice but to adapt to the hand signals to start a race,” Pietropola says. “Yes, most races I was the last one to get in the water by fractions of a second, and it was a huge disadvantage on my part to get a late start. But I used the late start to my advantage, and I was determined to swim faster.

“I have to be determined in order to succeed — in swimming and in life. Life is a challenge, but you can make it through with a positive mindset.”

Nancy Pietropola admits to being a little more of a worrywart than some moms because of Mia’s deafness, but that did not get passed on to the older of her two daughters (her younger daughter, Krista, is a basketball player in the process of transferring from Youngstown State to Slippery Rock). “I can’t say that Mia’s deafness has limited her at all. If anything, she wants to show people that it doesn’t limit her,” Nancy Pietropola says.

When Pietropola won the 200 individual medley preliminary in February, she was given the customary right to pick a song to be blared as walk-out music for the final.

“What she decided to do is tell them that she is deaf and she does not want a song being played and to dedicate that to all the deaf athletes,” her father, Tom, says. “It was like a moment of silence. “So we were in her world for a few minutes.”

This article appears in the June 2015 issue of Pittsburgh Magazine.
Categories: From the Magazine, Hot Reads, Sports