Make plans to enjoy the array of family-friendly activities and performances the park has to offer. 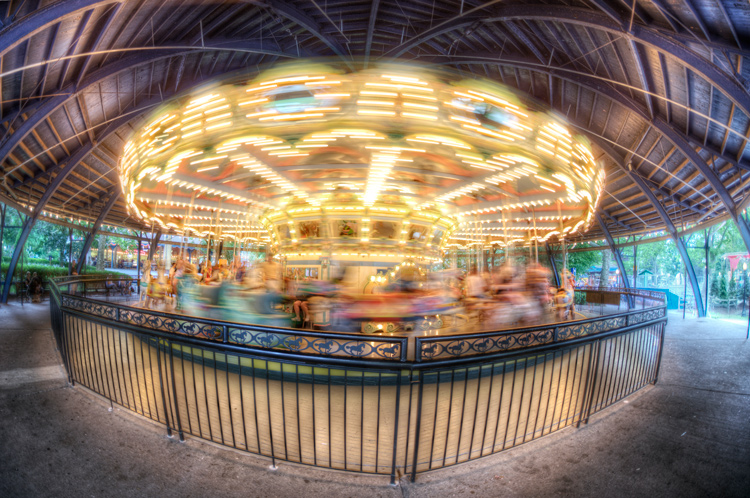 PUT A DASH OF SUMMER INTO YOUR HOLIDAYS AT KENNYWOOD
It’s a constant chorus around here. Beginning in October, legions of ’Burghers bemoan the loss of warm weather; “Pittsburgh is so much more fun in summer,” they cry! If we may make a suggestion for those missing the sun: Just do summer stuff year-round. Many restaurants offer heated outdoor seating areas. The Dependable Drive In is open year-round. Piratesfest just drenched December in Jolly Roger flags. And, for the fourth time, Kennywood is open for its yearly "Holiday Lights" celebration.

This is the last weekend of 2014 for the still-young tradition, so make plans now to enjoy the array of family-friendly activities and performances Kennywood has to offer, including choreographed light shows, live carol singing, magic shows and more. While roller-coaster speeds are ill-advised in cold weather, a handful of rides — including the Merry-Go-Round, the Kangaroo, Ghostwood Estates and some Kiddieland attractions — will be open. To answer the most important question: Yes, the Potato Patch is up and running.
(4800 Kennywood Blvd., West Mifflin; Fri-Sat, 5-9 p.m.; tickets and info here)

PITTSBURGH’S MOST BIKE-FRIENDLY HANGOUT TAKES THE BAR EXAM
Outside of the dedicated folks at Double Wide Grill, few restaurants have the gumption to stick to their themes at all times. But OTB Bicycle Cafe’s two locations are really, really serious about bikes — so if you want a turkey burger, you’ll have to ask for the “Trail Steward,” and if you’re after fried zucchini, you’ll need to order the “Spoke Junkie.” The mini-chain’s tagline is “Beers, Bikes, Burgers,” and their dedicated followers make that more mantra than marketing. See how OTB’s North Park location holds up to the Bar Exam in this week’s edition of After Dark!

REVISIT A CLASSIC (OR GET AN INTRODUCTION) AT PICT
If you’ve read Charles Dickens’ novel “Great Expectations,” you have an excellent opportunity to see the classic come to life this weekend — and if you haven’t, this is a great time for an introduction. The tale of love and revenge runs for one more weekend at PICT Classic Theatre’s regular home, the Charity Randall Theatre in Oakland. Grab tickets now for one of four remaining performances featuring an all-star cast of local theater favorites, including Martin Giles, Karen Baum, Mary Rawson, Larry John Meyers, David Whelan and more.
(4301 Forbes Ave., Oakland; Thu-Sat, 8 p.m., and Sat., 2 p.m.; tickets and info here)

IN THEATERS: Two heavyweight films finally land in Pittsburgh this weekend, as the locally filmed “Foxcatcher,” with Steve Carell and Channing Tatum, and “Wild,” starring Reese Witherspoon, receive local premieres tomorrow. Other films opening include the comedy sequel “Night at the Museum: Secret of the Tomb” and the musical adaptation “Annie.” And remember, plenty of flicks open on Christmas Day, including “Into the Woods,” “Unbroken,” “The Imitation Game” and “Big Eyes.”