The WPXI-TV reporter trades heels for a hard hat to renovate a Lawrenceville row house with her architect husband. 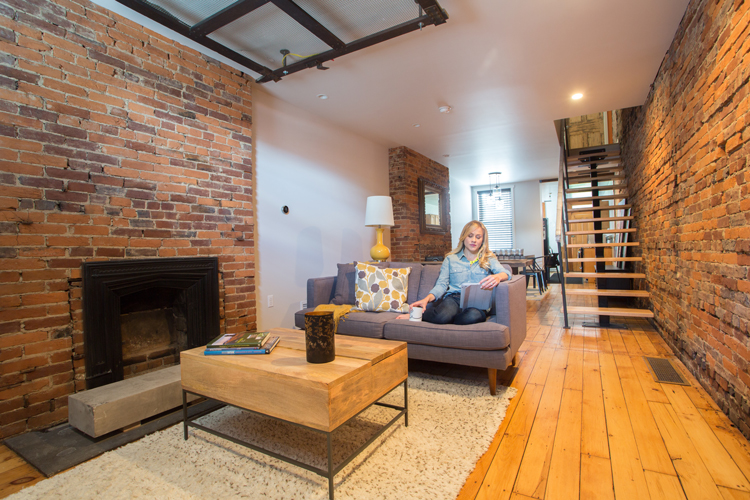 Viewers of WPXI Channel 11 News are used to seeing reporter Courtney Brennan looking calm, cool and glamorous as she reports on fires, crime and other breaking news in the Pittsburgh region.

But during her off-camera time, Brennan isn’t afraid to trade in her high heels and microphone for a dust mask, a hammer and some nails.

“I know I have to get dolled up and look nice for work, but I’m really low-maintenance,” she says. 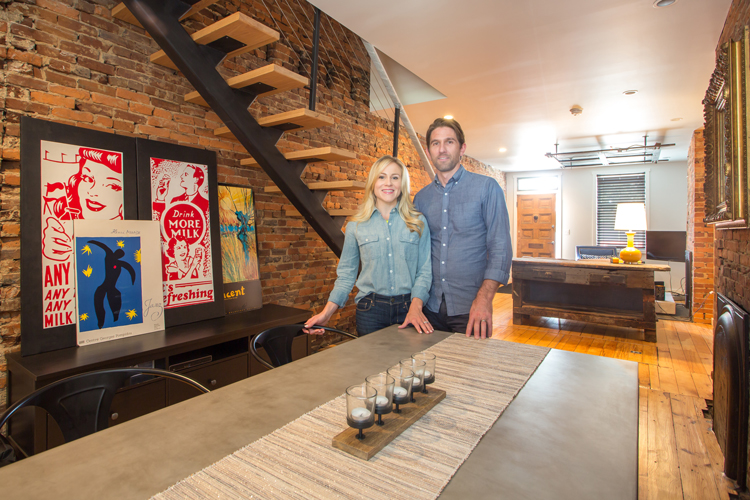 That’s a good thing because with her husband, landscape architect Mark Ambtman, 38, Brennan has been experiencing the highs, lows and everything in between of remodeling a row house in Lawrenceville for the past year-and-a-half.

When the couple bought the two-bedroom fixer-upper in March 2014 — closing the deal on Ambtman’s birthday — Brennan had never taken on a home-improvement project. That all changed in the months that followed, as Brennan, 32, learned how to work with power tools (she’s not a fan of the chop saw), courted danger by adding attic vents to the roof on one of the hottest days of the year and endlessly chipped away at plaster walls to expose the brick underneath.

“I’ve definitely become kind of fearless when you’ve just got to jump in and do stuff, where I never would have done that before,” she says. 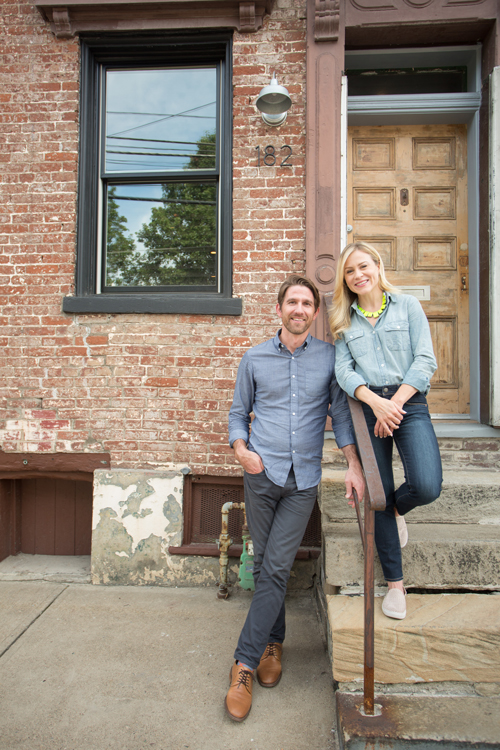 She’s fortunate in having Ambtman, who works at AE7 architecture firm’s Pittsburgh location in the Strip District, to guide her. The couple moved to Lawrenceville from Westmoreland County, where Brennan worked as the news bureau chief before moving to a city beat. They knew they wanted an investment property where Canadian native Ambtman — who in the past had enjoyed remodeling his homes — could turn to his design background in architecture and put his skills to use.

“I didn’t know how to do any of it. He knows how to do everything,” Brennan says. “He has the design talent and the style.”

Desiring a walkable community with easy access to food and entertainment, Brennan and Ambtman focused their home search in Lawrenceville. They found their dream house near Butler Street, not far from such spots as Piccolo Forno and Espresso a Mano — a perfect location for foodies looking for a night out, they say. 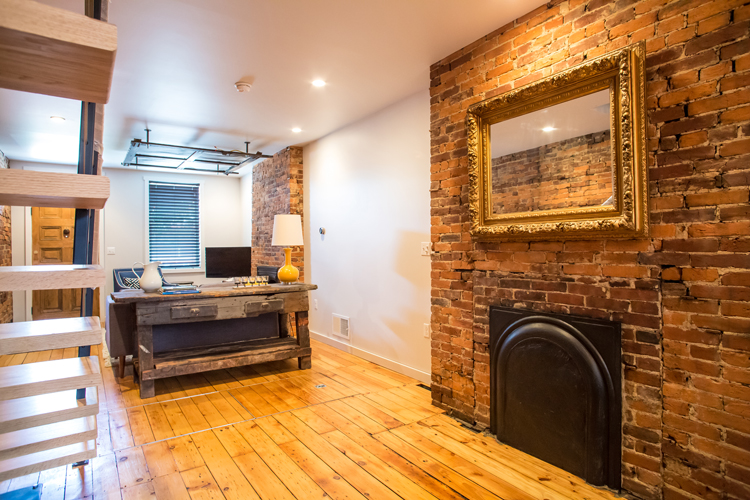 They weren’t the only ones who eyed the fixer-upper. On the same day she and her husband toured the house, eager investors made three cash offers for it, Brennan says. After charming the home’s owner — who bonded with Ambtman over his enthusiasm for the 1850s-era home’s history and original features, including the wooden front door — the couple got the sale.

“We were so glad he picked us. He wanted to sell to a family, so bless his heart,” Brennan says. “You just can’t compete with these people coming in with cash.”

The next part was harder — converting the clustered, narrow rowhouse into Ambtman’s vision of open concept, industrial chic. 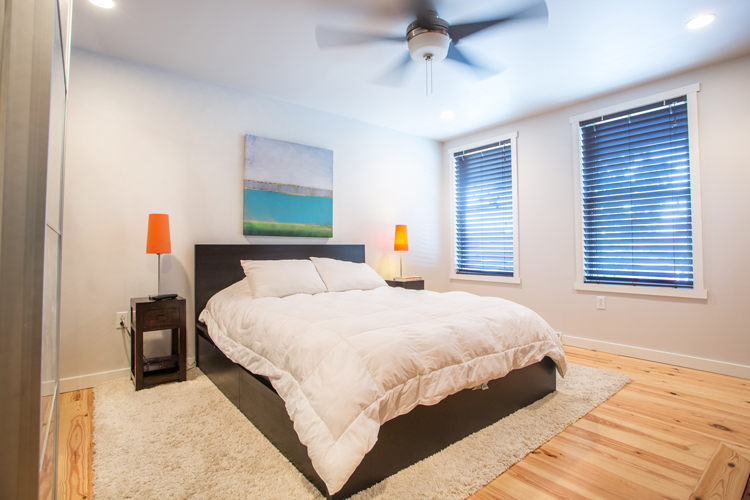 Step one called for using Ambtman’s computer to reimagine the interior of the house. When the couple bought the row house, it was divided into three tiny rooms on the bottom floor with a staircase through the center. After taking measurements of the house, Ambtman used computer-aided drafting to determine how to eliminate the walls; later he created a 3-D model of what the house would look like when finished.

“We knew what to do,” Brennan says. “If you look at the house now compared to his drawings, it looks exactly like that. It was kind of our blueprint.”

One of the largest projects was moving the staircase from the center of the home to the far right wall. Removing the staircase, however, meant leaving a large hole in the floor, which Ambtman covered by building a floor hatch with reclaimed wood pieces from other parts of the house. More difficulty came in the form of trying to move a new, 700-pound staircase, built in upstate New York, from the back of a U-Haul truck into the narrow building — a task that tested the strength of Ambtman, his brother-in-law and Brennan’s cousin. 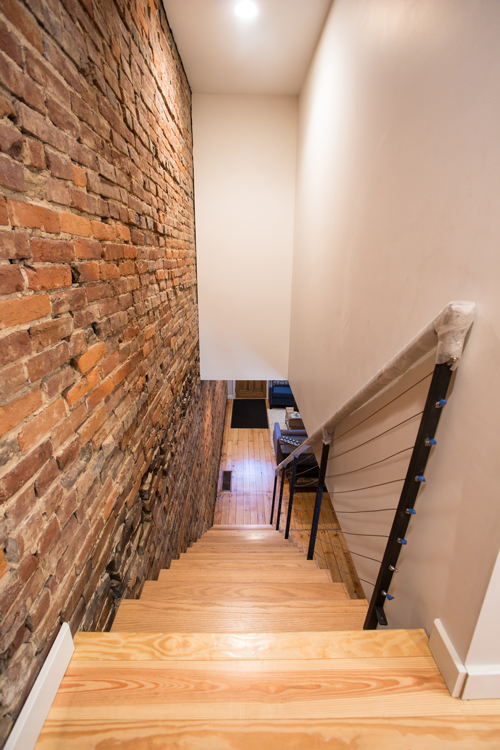 “It was super-dangerous because it was way heavier than I thought [it would be],” Ambtman admits.

The new floating staircase, with stainless steel wires for its railing, hugs the exposed brick wall — another enormous project that involved Ambtman, Brennan, her sister (WTAE-TV reporter Kelly Brennan) and other family members chipping away at the plaster.

“That was the longest, most frustrating part,” Brennan says.

The couple ripped out carpeting to expose hardwood floors underneath and completely reconfigured the second floor, adding a hallway, bathroom and laundry room.

With the exception of the period of heaviest demolition work — when Brennan and Ambtman stayed with her parents in their home in Ross Township — the couple lived and worked at the house through construction.

For many months, they were confined to a bedroom and the bathroom, which Brennan says was fine with her. No fan of cooking, the North Hills High School graduate admits she didn’t miss the kitchen.

“It was fine. We ate in our bedroom. We did everything in the one room,” she says. “All I need is coffee and a place to microwave food.”

The strain of living in a construction zone might test the mettle of some marriages. Brennan and Ambtman — who married in 2012 after meeting in Asheville, N.C., where she was working as a reporter — say working on the house and in cramped quarters brought them closer together.

“We’ve heard people talk about how it’s stressful for a relationship, and it’s really taxing. For us, it wasn’t,” Ambtman says. “Maybe it’s because she’s patient.”

An avid blog reader, Brennan kept a humorous perspective through the process by chronicling the construction experience on her blog, ilove2sweat.

Originally intended as a fitness blog (Brennan is a spinning instructor in her downtime), ilove2sweat evolved into a charming, often funny — and still sweaty — timeline of the home-improvement process, including photos. As of press time, the site has about 700 subscribers and has drawn more than 110,000 page views.

“It’s about real life and the funny things that happen,” Brennan says. “I think maybe that’s why people like it. Because who wants to read about a perfect couple with a perfect house who do perfect things?”

In fact, the couple enjoyed the home-improvement process — and all its imperfect moments — so much that they’re planning to do it all over again. They now have set their sights on moving to another fixer-upper, this time a grand old stand-alone home in Lawrenceville. As for their current house, they’re considering turning it into a rental property.

“A lot of people don’t want to live in one room or deal with dirt, or [know that] every weekend, when you’re dog-tired, you’ve got to work on your house,” says Brennan, who plans to blog about the new house as well. “For whatever reason, we really like it.” 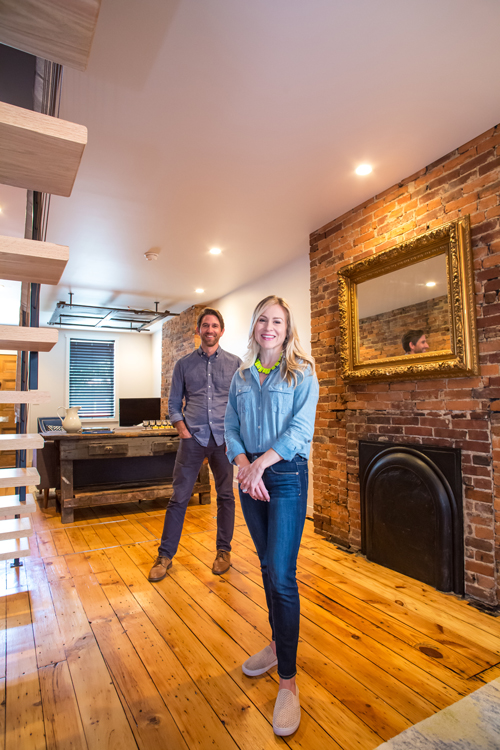 This article appears in the October 2015 issue of Home & Garden.
Categories: From the Magazine, HOME + Design, Hot Reads