Discover the origin of the Dirty Dozen, 13 of Pittsburgh’s biggest, baddest hills. 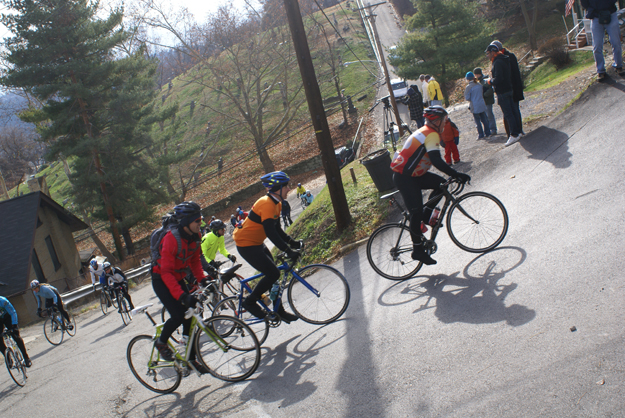 In 1983, bicyclist Danny Chew from Squirrel Hill and his older brother, Tom, went to Hillman Library and studied the lines on U.S. Geological Survey maps to see where the 12 steepest hills within 10 kilometers of Pittsburgh were located.  Then on a cold December day, they challenged each other and some friends to ride a course that included all those hills.  “Even that first year,” says Chew, “we called it the ‘Dirty Dozen.’”

Since then, this physically challenging bike ride (and race of sorts) has become a Pittsburgh tradition, held annually the Saturday after Thanksgiving.  This year’s trek will be the 29th-annual event; it’s an unsanctioned, grassroots-y kind of event with no official escorts or street closings.  Anyone with a bike and helmet may register ($15, advance; $20, day of) and partake in the ride.  Riders climb 13 of the city’s steepest hills on one lung-expanding, thigh-cramping, sweaty (or maybe frigid), exhausting and exhilarating Saturday.

Chew still organizes the event, using dannychew.com as the port of entry. There, you can read about the race, see photos and consider the basic route, which covers about 50 miles.

The hills themselves are killers. The demanding course goes through steep parts of Aspinwall, Sharpsburg, O’Hara and Etna.  Logan Street, which cuts up the hill above St. Nicholas in Millvale, may be the first really difficult climb.  Then Hill No. 6 is Rialto, the famous steep street often called “Pig Hill,” straight up from Route 28 onto Troy Hill. 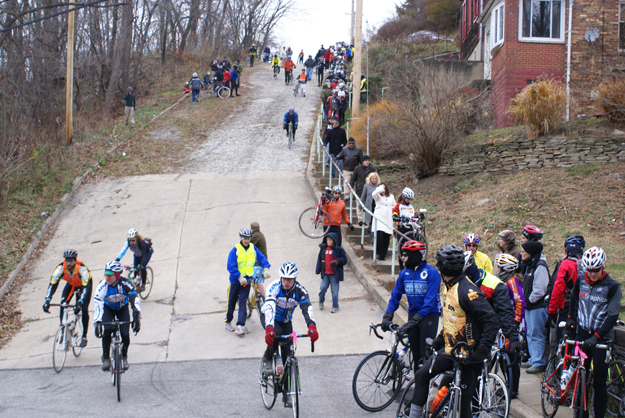 Hill No. 7 soars up the side of the East Street Valley under I-279 to Fineview.  Riders know it as Suffolk/Hazelton/Burgess.  It may be the most devastating climb of the day.  Then cyclists cross downtown to Sycamore Street, the fabled “Burma Road” up to Mount Washington that Lance Armstrong conquered many times in the early 1990s on the route of the old Thrift Drug Classic.

Many spectators turn out to watch Dirty Dozen riders on Hill No. 9, Canton Avenue in Beechview.  Bells and noisemakers rattle as riders slip and flip going up the short hill with the incredible 37-percent grade, paved with Belgian blocks; it may be the steepest hill in the world.

Face it:  The Dirty Dozen is an endurance test.  “A hilly 50-mile ride can be far tougher than a flat 100,” Chew admits. There are small cash prizes for elite male and female racers, but just finishing the 13 seems to be what’s important.

Riders who end up at the top of Tesla Street in Hazelwood are all zonked.  But they also seem to glow, knowing they have finished one of the most grueling sporting events anywhere.

Rick Sebak’s public TV documentary about this race won a 2011 Mid-Atlantic Emmy for Best Sports One-Time Special. Get a copy of the documentary on the new DVD, “IT’S PITTSBURGH Best Of Season One,” available at shopwqed.org.

This article appears in the November 2011 issue of Pittsburgh Magazine.
Categories: Rick Sebak