Kayak Pittsburgh Will Put You Up the River (With a Paddle)

For $15 per hour, you can get the best view in Pittsburgh this weekend. 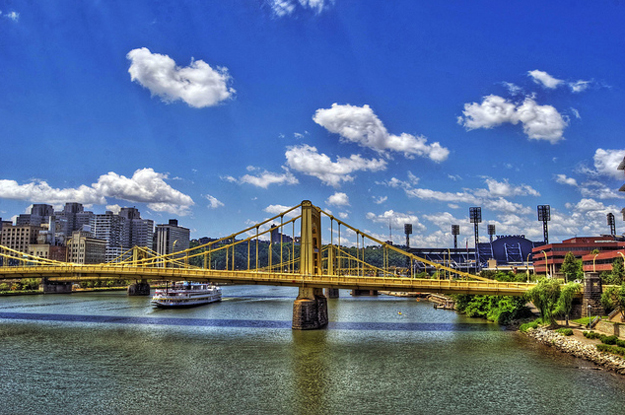 KAYAK PITTSBURGH CAN PUT YOU IN THE RIVER
Somehow, it seems that there are a few of you out there who haven’t plopped down in a kayak for some spirited paddling. If you’re still not in the know, let’s make it clear once and for all: It is remarkably easy to get in the water here in Pittsburgh, with quality instruction and equipment available anytime on the cheap.

Kayak Pittsburgh is up and running seven days a week at three locations: their downtown home under the Sixth Street Bridge, the newest launching point at Millvale Riverfront Park and the suburban outpost in North Park. Rentals are a mere $15 per hour ($8 for each additional half-hour). And the friendly instructors will be happy to show you how to stay (relatively) dry. Details are available at kayakpittsburgh.org; if you want a more organized start to your river experience, check out the many tours and programs offered by Venture Outdoors (ventureoutdoors.org).

IT'S A COMEDY BRAWL, FOR A GOOD CAUSE
For months, the hungriest up-and-coming comedians in Pittsburgh have been duking it out for a chance to compete at Diesel Club Lounge in South Side this Friday Night. “Laughing in the Face of Cancer,” the finals of the Gilda’s Club funniest comic competition, are hosted by WDVE’s Randy Baumann and a panel of celebrity judges; 13 comics will vie for the title of Pittsburgh’s Funniest Comic. Get the full story in this week’s edition of After Dark!

GET SOME FEEL-GOOD GRUB AT HOMETOWN-HOMEGROWN
As an institution known for cataloging all sorts of age-old regional relics, the Sen. John Heinz History Center might not be the first venue you’d expect to host a grand foodie event. Prepare to be shocked: On Saturday, the Center will present Hometown-Homegrown, a gathering that blends fine fare with history (docent-led tours are part of the agenda). Watch famed local chefs like Chris Fennimore in action at a cooking demo station, or sit in on the much-anticipated cookie judging, wherein panel members will critique cookies baked by Center chefs (who used local residents’ top recipes). Popular Pittsburgh businesses like Original Oyster House will even hand out goodies. One thing's for sure: After receiving a history lesson about local grub, you'll undoubtedly appreciate your next Primanti’s sandwich even more. (heinzhistorycenter.org)

In Theaters:  New films coming to Pittsburgh this weekend include Pixar’s Scottish epic, Brave; the imaginative historical action flick Abraham Lincoln: Vampire Hunter; apocalyptic comedy Seeking a Friend for the End of the World; and Wes Anderson’s acclaimed Moonrise Kingdom. PM Film Editor Sean Collier will appear on the 102.5 WDVE Morning Show Friday at 7:15 a.m. to review Brave and Seeking a Friend for the End of the World; even with Pixar’s recent tendency to throw some tear-jerking scenes into their flicks, he’s pretty sure that Seeking a Friend will turn out to be the more depressing of the two. Tune in to 102.5-FM or DVE.com to hear Sean’s reviews!

Head to Savoy next Wednesday, June 27, for Fire and Nice at Savoy Restaurant, a benefit for the Cystic Fibrosis Foundation. In addition to a jaw-dropping silent auction, delectable food from Savoy and more, you’ll be treated with complimentary signature martinis from Clique Vodka. Tickets are available in advance at Elliven Spa; call 412/278-2500 for info.

What happens when you fuse comedy, Broadway, and high school thespians? Hot on the Arts is a TJ (Thomas Jefferson) Arts event hosted by WPXI’s Darieth Chisolm featuring Pittsburgh actor/comedian Tim Hartman, Broadway veteran Lenora Nemetz, and thirty or so TJ alumni and current students for a cabaret-style performance at 7 p.m. June 23 in the CCAC South Campus Theater. Click here for more.

In celebration of the newly renovated Buhl Community Park at Allegheny Square, the Children’s Museum of Pittsburgh is offering free admission and – gasp – free parking (while it lasts) to visitors on June 23. Events include the dedication ceremony, Cirque-tacular (featuring acrobats and aerialists), Hula Hoop Jam and activities hosted by groups including the National Aviary and The Andy Warhol Museum. Click here for more.

This article appears in the June 2012 issue of PMWeekend.
Categories: Things To Do