The Kaufmann’s Clock is not only a piece of urban decor and a massive, bronze timekeeper; it has famously been used as a meeting spot for generations of Pittsburghers. 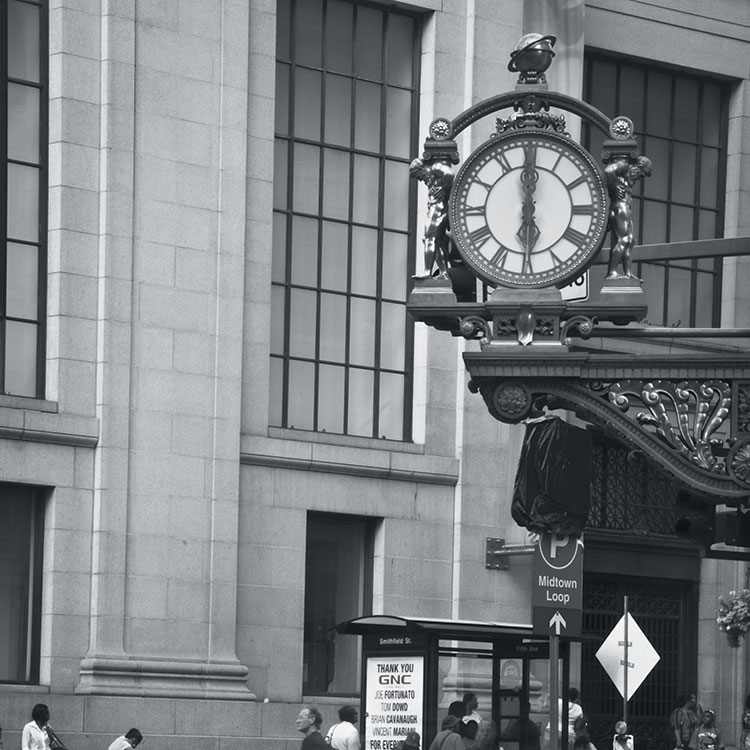 “Meet under the Kaufmann’s Clock” was a frequent phrase throughout the 20th century, speaking to the captivating nature of the clock amidst the streets of Downtown. The gracefully aging clock has stood in the same spot for over a century, keeping time and attracting photographers. The ticking time-piece remains a staple, so we thought we’d take a minute to break it down.

1884
The year the clock’s predecessor — which stood on a post — was installed outside of the department store.

1913
The year the clock was installed in its current location.

Smithfield & Fifth
The clock stands at the corner of these perpendicular streets, which have remained major Downtown thoroughfares for more than a century.

A Ticking Alloy
The historical clock is made primarily of bronze.

2,500 lbs.
The staggering weight of the big bronze clock

An Official Landmark at Last
In 1981, Kaufmann’s was given landmark status from the Pittsburgh History & Landmarks Foundation after 68 years of timekeeping; the clock was included as a landmark itself.

Corncob Cleaners
After more than 70 years of dirt, soot and bird droppings built up on the clock, it was determined that a thorough cleaning was needed in 1987. The typical solvents used to clean the clock just weren’t cutting it, however; a piece of equipment typically used to clean bridges, which shot ground corncobs at the equipment, left the clock as good as new.

Time Will Continue
The Kaufmann’s name was replaced by Macy’s in 2006; in 2015, Macy’s shuttered the Downtown location. Core Realty bought the building and plans to redevelop the space — but the company promised to retain the iconic clock outside the building, due to its historical meaning to the city.

This article appears in the October 2017 issue of Pittsburgh Magazine.
Categories: Community Feature, From the Magazine