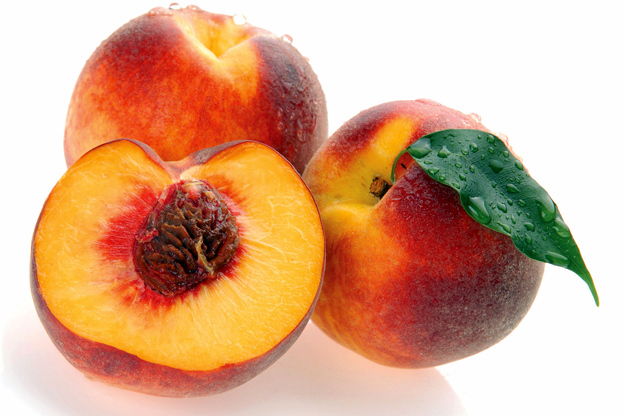 With its explosion of sweet juice and delicious flavor, nothing sums up summer quite like a perfectly ripe peach. Luckily, Pennsylvania has plenty of orchards (the state is ranked among the nation’s top-10 peach producers), and the first harvest begins in mid-July.

Locally, Red Haven is one of the first available varieties. It was originally developed in Michigan and is still a quality standard for yellow peaches, with an intoxicating fragrance and creamy mouthfeel. But this is just one of thousands of recognized peaches, which come in many varieties: The main categories are clingstone and freestone. The fruit may be brilliant pink, deep red, burnished gold or blushing white with interior flesh that’s white, pale pink or golden.

We’ve come to expect big, sweet peaches for summer eating. But when peaches originated in China thousands of years ago, the fruit was small, sour and very fuzzy. Through breeding, varieties improved, and soon, the peach was cultivated in Persia then taken to ancient Rome and the remainder of Europe. In the United States, Spaniards planted the first orchard in Florida in 1565, and shortly after, the fruit was adopted and widely planted by Native Americans and colonists.

In previous centuries, peaches were especially valuable because they made excellent jam and responded well to home-canning; today’s slow-food movement and its enthusiasm for preserving (for fun ideas, visit foodinjars.com) gives new reasons to work with peaches in the kitchen.

Because ripe, fresh peaches are fragile and prone to bruising and damage, the shorter the journey from tree branch to your hand, the better. If you buy from a local farm, there are many benefits: Fruit can stay on the branch until peak harvest time, since it doesn’t have to be shipped far. And trees are kept healthy through integrated pest management (as opposed to routine chemical spraying).

Many western Pennsylvanian farmers know more than we could ever imagine about how to select the ripest peaches. So, why not rely on them? Take a short road trip to a local farm stand, or schedule a visit to a local farmers market and bring home luscious, homegrown fruit.

Eating this easy dessert is the perfect way to end a summer meal. Our recipe calls for sprinkling a cinnamon and brown-sugar mixture on the peaches, but experimenting with other spices—such as cardamom or ground ginger—can also yield delicious results.

Slice four fresh, ripe peaches along the seam (all the way around), gently twist in half and remove the pit. In a small bowl, combine two tablespoons of brown sugar and one-half teaspoon of cinnamon. Lightly brush canola oil onto the peaches’ cut sides. Place peaches cut-side down on a hot grill until brown and caramelized (or until grill marks appear), which should take between three and four minutes. Brush tops with oil, turn over and set aside. Sprinkle cut sides with cinnamon-sugar mixture. Cover grill, and cook until sugar is melted and fruit is tender, which should take between 10 and 15 minutes. To serve, top with vanilla ice cream—or for something different, top with crème fraîche and fresh thyme or lavender. Serves four. 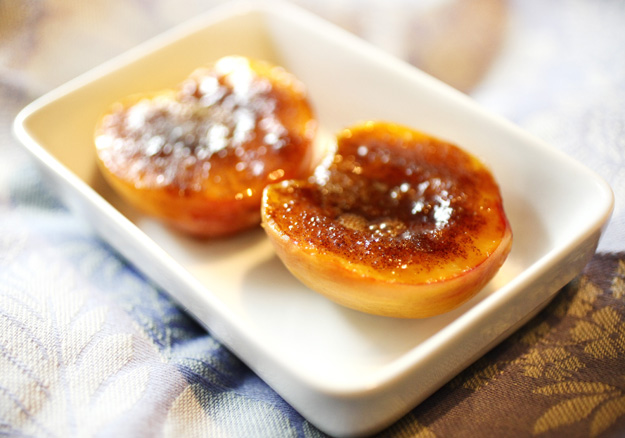 The types of peaches grown by Chambersburg farmers—Red Haven, for example—are the same kinds grown by local farmers. Now that you know the truth, you’ll never make the faux pas of asking a local peach farmer for Chambersburg peaches.

Note: You will see signs advertising “Chambersburg peaches” in front of many regional grocery stores. Check the sticker on the fruit to ensure that it doesn’t say “Georgia.” (It does happen.)

Cheat Sheet: Where to Buy a Bushel

Use this cheat sheet to find delicious, Pennsylvania-grown peaches in mid-July. If you want to can or preserve your fruit, call the farm in advance because most places will sell peaches by the pound, bushel or half bushel.

It’s great to buy peaches from this family-owned, 140-acre farm in Franklin Park. The orchard contains more than 850 trees and includes plenty of peach varieties like the Red Haven, a regional favorite. Shop for fruit at the homey, old-fashioned Kaelin Farm Market, which also offers a tempting array of peach treats such as homemade crumb-topped peach pies (which sell out quickly on weekends, so call ahead if your heart is set on one). Other choices include fresh peach smoothies, milkshakes and sundaes.

Owned and operated by nine generations of the McConnell family throughout the centuries—with a founding date of 1787, it’s the oldest farm operated by a single family west of the Allegheny Mountains—this spot specializes in peaches. The 200-acre farm boasts more than 4,000 peach trees of 40-plus varieties, ranging from Red Haven to Glowing Star or Jersey Glo, which ripen later and carry the season through September. Shop for fruit and homemade peach jam at the farm market, or find the McConnells’ Farm stand at several local farmers markets, including East Liberty (Mondays) and Sewickley (Saturdays).

This isn’t a farm, but rather, a local, family-owned shop with three locations in the region. Yet Pennsylvania-grown peaches are especially important to its success: When Elwood McGinnis, the store’s founder, attended a seminar in the 1970s about Pennsylvania peach farms, he met the Chambersburg and Gettysburg area farmers who continue to supply the McGinnis Sisters stores. During the season, the company’s produce buyer drives to the farms twice a week to pick up the crop. The stores now can the same peaches they sell fresh throughout the season, which are available year-round. During summer, the store bakeries offer freshly baked pies and peach cobblers.