Just Don't Drive to East Carson Street on the Weekend

A story of an absurd towing incident and a lesson: On Friday and Saturday night, taking your car to the South Side just isn't worth it. 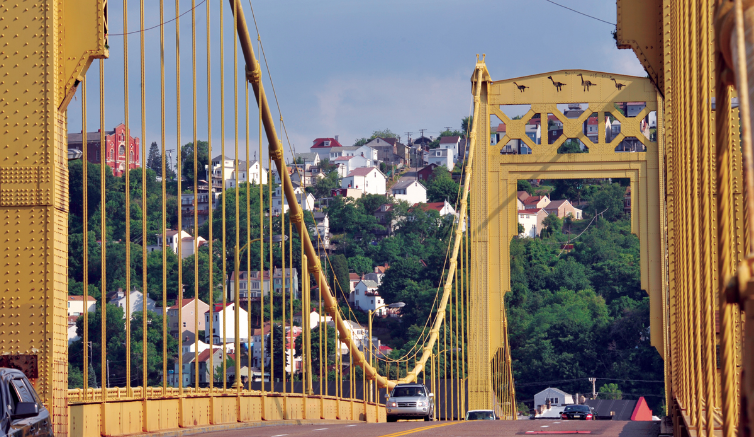 After a comedy gig at Club Cafe, I walked around Bedford Square to find my car had become quite popular.

Clustered around my Honda Civic, which for its part seemed somehow indignant about the situation, were a pair of police officers, a tow-truck driver, another man undefinably associated with the tow-truck driver and the owner of a second car. The latter vehicle sat on the back of a flatbed tow truck; mine was hitched to the rear of the truck.

Two separate debates were underway. One, between the tow-truck driver and his compatriot, seemed to concern how to best remove my car from the neighborhood; apparently dragging cars with activated emergency brakes behind a truck causes those cars to become rather suddenly dismantled. Even among the assembled authority figures, who were quite convinced that my car needed to be elsewhere immediately, it was acknowledged that violently rending my car into several pieces was a poor idea. The other debate, between the owner of the other offending vehicle and pretty much everyone — the officers, the tow guy, the tow associate, passersby, assorted gods, the universe — was a classic case of Seriously vs. Yes, Seriously, We’re Towing Your Car.

With all this going on, it took me a good few minutes to discern why, exactly, my car and its neighbor had to be somewhere else so urgently. It seems that I, along with my existentially outraged compatriot, had parked in a no-parking zone that had been very effectively disguised as not a no-parking zone. On close inspection, the argument that we were illegally parked was credible, if not fully convincing. As to why we needed to be towed rather than simply ticketed, that remains unclear.

The South Side has become a site of rampant towing for a few years, ever since a new policy decreed no parking would be allowed along several blocks of East Carson Street on Friday and Saturday nights. The change was presented as a safety measure; to be fair, I’m sure that having fewer cars along the city’s most raucous blocks does make things at least nominally safer. In reality, I suspect that the new rule was simply designed to convince more people to not drive to the South Side on the weekends, thus cutting down on drunk driving. Nothing wrong with that goal. And I understand why towing cars left on East Carson — where the policy is clearly stated on any number of signs, several of which hang the threat of towing over parker’s heads like a boring Sword of Damocles — is an effective way to ensure compliance.

I was not parked along East Carson Street, though. (Nor had I been drinking, for the record; I had been playing Severus Snape in an onstage roast of Harry Potter, and Snape strikes me as a teetotaler.) I was parked in Bedford Square. When I asked why towing was necessary, rather than mere ticketing, one of the police officers gave the stock answer: “Fire trucks can’t get through.”

Given the situation, I chose not to point out the obvious fact: A fire truck couldn’t circumnavigate Bedford Square if it was made of jello.

My second question was for the tow-truck driver: Since I was now physically present and very much capable of driving my car away, and my car was in fact still on the ground, couldn’t I just, ya know, leave?

He responded with an argument so perfectly illogical, so utterly devoid of merit that I couldn’t even protest: “Well, I can’t let you go, because then I’d have to let him go.”

I don’t even know what I might’ve said. “No you wouldn’t,” perhaps. But he had pitted me and the other victim of this surreptitious vehicle relocation against one another; I was backed into a corner.

I stood, considering this linguistic black hole for a moment, before one of the police officers cut to the chase: “The bottom line is, you’re getting towed.” This too was not actually an argument of any kind, but I had to admit it was correct: I failed to see an eventuality in which I was not going to be towed.

After engaging in the cosmic punishment of actually assisting the towing process by unlocking my car and disengaging the emergency brake, I had the chance to further embrace absurdity by calling a Lyft to follow my own car to an impound lot so I could immediately retrieve it.

The whole incident was so ridiculous that I can barely even be angry about it. (When I remember the vast sums of money I now owe both the towing company and the city, my anger returns.) I’m left with only one conclusion, though.

It’s not worth it to take your car to the South Side on the weekend.

Wherever you’re parking, whenever you’re getting there, whether you’re drinking or not drinking, whether you’re there for a minute or overnight, it’s not worth it. The rules are vague and tricky; the penalties are draconian and swift. Hours of your life and hundreds of dollars could be spent atoning for a mistake you didn’t even know you were making.

Want to go to the South Side on a Friday or Saturday night? Take a Lyft (or, if you’re not drinking, rent a Healthy Ride bike somewhere else in the city — where cars may relax in peace — and return it at one of the South Side stations). Don’t feel like doing that? Don’t go. It’s not worth the risk.

And if the businesses of the South Side take exception with the idea that patrons should avoid the neighborhood rather than try to figure out the parking, perhaps they should take it up with the city. Perhaps there are solutions to the South Side’s problems that make more sense than the utter logic vacuum in which I ended my Saturday night.

Build a garage. Just a thought.