It takes a strong swimmer and the right timing to dive into the three rivers. For those up to it, the difference between the pool and open water is profound. 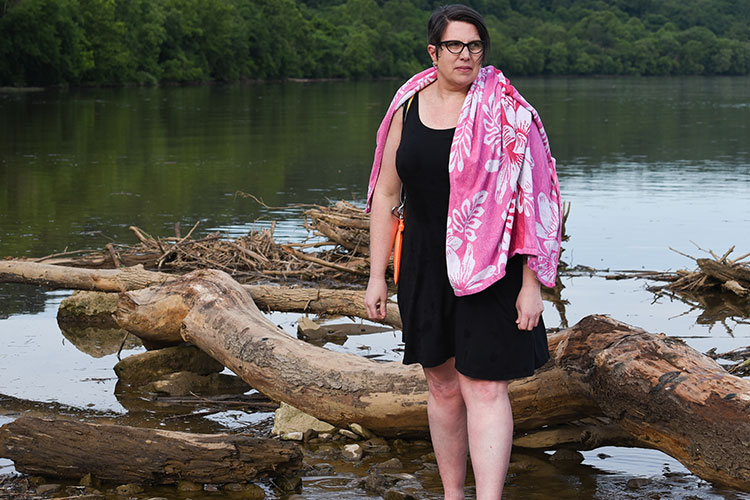 Sarah Quesen (above) and Ari Pressman (below) agree that open-water swimming is only for experienced athletes.

Sarah Quesen isn’t afraid to jump in the rivers on a warm summer day. But her decision to put on a brightly colored swim cap and do the breaststroke has scared others.

On two occasions, police have met Quesen post-workout to verify that she was alive and well — and not a dead body in the river, as she was reported by frightened citizens.

“I know I have a really bad stroke count and I’m not very fast, but it’s kind of insulting when they think you’re dead,” she laughs.
​ 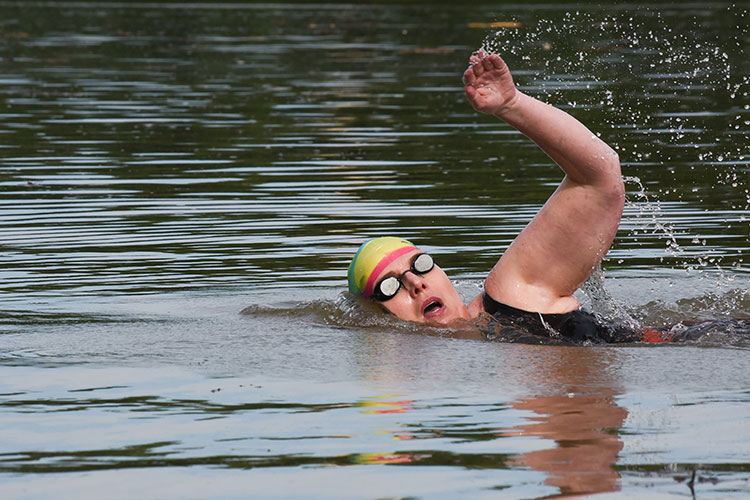 Quesen, a research scientist with educational services company Pearson and an adjunct instructor at the University of Pittsburgh and West Virginia University, takes to the rivers from May through October. “I grew up in Florida where it’s not called ‘open-water swimming,’ it’s just swimming,” she says. “When I moved to Pittsburgh, I couldn’t figure out why nobody was doing it here.” So she started organizing swims in the Monongahela and Allegheny rivers, away from the monotony of pool laps; the group swims led to the creation of her blog (openwaterpgh.wordpress.com).

There’s another fear that people share when she tells them she swims in the rivers: What about the … sewage? That’s the first question people ask. “Kids, even adults, everyone wants to hear about the poop,” she says. “Everyone gets hung up on that.”

It’s a valid concern. Allegheny County sanitary sewers were designed to handle 250 million gallons of wastewater per day. When capacity exceeds that amount — due to heavy rain or snowmelt on top of what goes down the drains — the system overflows, sending diluted sewage into the rivers, explains Jeanne Clark, director of government affairs for Allegheny County Sanitary Authority (ALCOSAN). 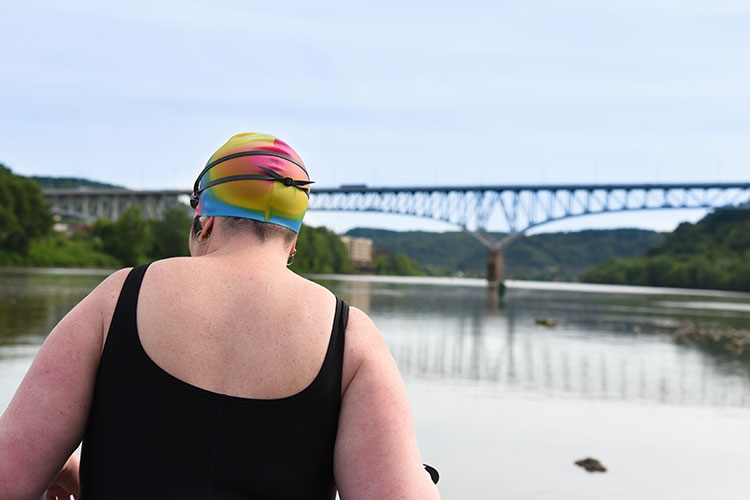 That can pose a health hazard for people using the waterways for recreation.

​ALCOSAN created the Sewer Overflow Advisory Key (SOAK) program, which is active from May 1 to Oct. 31, to alert citizens when the system goes into overflow. Once that happens, it takes the rivers 48 hours to recover, Clark says, and people are advised to stay out of them. In 2017, the alerts were sent out on 65 occasions.
As far as the overall safety of swimming in the city’s waterways, Clark — who learned to swim in the Allegheny River — says ALCOSAN operates on an advisory basis only. “It’s never going to be a swimming pool. It’s a natural body of water,” she says.

Quesen relies on the SOAK alerts  (when one is active, she doesn’t swim) but says there are more things to consider before jumping in the river. 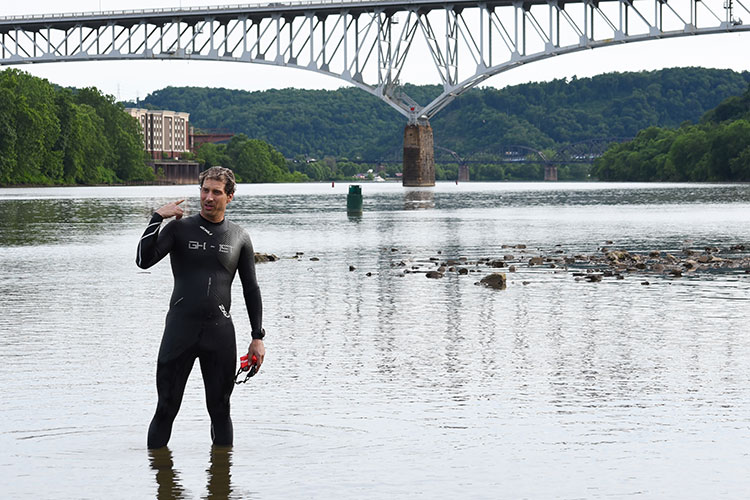 Ari Pressman, a local orthopedic surgeon, has been training for triathlons in the waterways around Pittsburgh and Morgantown for the past three or four years. He competes in three a year. He stresses that river swimming is not a beginner’s activity; it requires the kind of endurance most casual swimmers lack.

“It would be a shame to see people who were unprepared jump into a moving body of water and not be able to swim upstream,” Pressman says.

In open-water swimming, it is vital to swim upstream, or against the current, first. This ensures that as a swimmer tires, the current can help bring them back to their starting point. People who can’t swim against the current, which Pressman estimates can range from a mile to half a mile per hour in the lower Monongahela, run the risk of being carried downstream. 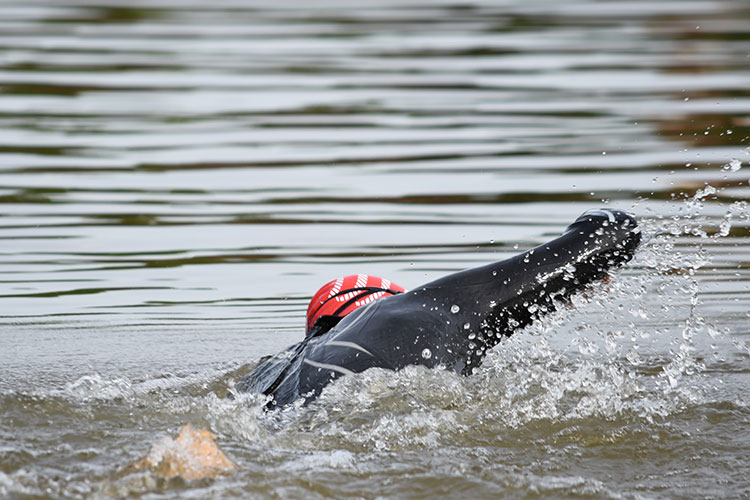 Even strong pool swimmers are surprised by the currents and waves they encounter in a living body of water, Quesen adds. Both caution that before diving in, it’s important to do an honest self-evaluation of your abilities as a swimmer. Quesen, who also has done triathlons, has circumnavigated Manhattan as a member of a four-person relay team.

Other safety tips from the experts: Make certain that someone on land or in a boat is watching you or at least is aware of your location and plans. Keep a floatation device, like a buoy on a tether, with you. Finally, wear appropriate clothes like a bright cap.

With ample preparation and caution, though, there are innumerable spots in the area for a swim. Pittsburgh’s kayak put-ins make great access points; Quesen cites the kayak ramp under the Clemente Bridge as a favorite location, as well as Duck Hollow along the Mon.

Both swimmers stay in shape through the winter by training in pools. But to Quesen, nothing compares to swimming in a natural body of water.

“Have you ever run on a treadmill versus running in a park? That’s the difference,” she says. “It feels good to get outside and do stuff. Whatever your sport, it always feels better to get outside, move around, be in nature and clear your head.”

This article appears in the August 2018 issue of Pittsburgh Magazine.
Categories: From the Magazine, Hot Reads, Sports