He’s tall (6 feet 5 inches), dark (his jet-black locks have a touch of salt and pepper perfectly accentuating his temple region) and handsome (… and chiseled …and fit). Joe Manganiello also is smart (he has a bachelor’s from Carnegie Mellon University), and he gives back to the community (he supports Until There’s a Cure, a national organization dedicated to eradicating HIV/AIDS by raising awareness and funds through his public service announcements). Add that all up, and you’ll have no problem figuring out why this man is such a hot commodity.

Executives in Hollywood certainly believe in his marketability, and “True Blood” creator and producer Alan Ball has signed on Manganiello to play werewolf Alcide Herveaux on HBO’s hit drama series. So now we can include “owwwwlll” with all the other plus factors this Mount Lebanon native has going for him.

“True Blood,” based on The Southern Vampire Mysteries, a series of novels by Charlaine Harris, takes place in Bon Temps, a fictional small town in Louisiana. The plot centers on Sookie Stackhouse (played by Anna Paquin), a telepathic waitress at a local bar caught in a love triangle involving two vampires, played by Stephen Moyer and Alex Skarsgard, both of whom are vying for Sookie’s favor.

For the third season, Joe Manganiello enters the picture as Alcide, who is now caught in a “love square”—as Joe refers to it—with Sookie and the vampires. 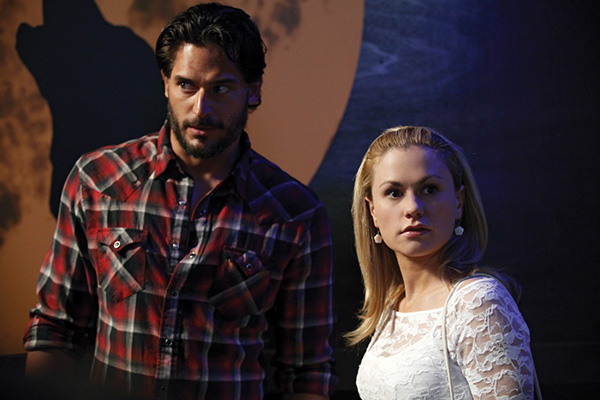 “My character has a really big presence, and he is vying for Sookie’s attention, too,” explains Manganiello.

After his update about love on the set, Joe wanted to touch base about his first love—the Pittsburgh Steelers. “How’s Ben doing?” Manganiello asked (it’s been noted that he’s sweet). Manganiello is anxious and excited about another season of great Steelers football. “I bleed black and gold,” he admits.

If you need further proof, take a look at DieHardz, the 2007 short documentary he produced and directed about diehard Steelers fans convening at a Los Angeles bar. (Watch it below.) That’s just one way Manganiello has brought his love of Steelers football to Los Angeles, where he now lives.

His passion for the game makes even more sense when you discover that this 1995 Mount Lebanon High School graduate was a varsity football player at the school, not to mention serving as the captain of the basketball and volleyball teams. “I thought I was going to play basketball in college,” says Manganiello, who makes use of the brawn of his athletic physique in his acting gigs.

Nowadays, Manganiello has found his way around the tube, with appearances on almost every network and cable channel. To name a few: He’s been sexy bartender Owen on the CW’s “One Tree Hill” for three seasons, hot guy Brad on CBS’s “How I Met Your Mother” and Officer Litchman on NBC’s “ER.” He’s also been featured on NBC’s “Scrubs” and CBS’s “CSI:NY” and “CSI: Miami.”

If you stay couch-bound during commercial breaks from watching a show Manganiello isn’t on—don’t worry. You also can catch him on a recent Taco Bell commercial, where he’s gunning for a chicken tortada on a busy street playing—what else?—tall, dark and hungry.

PM: When did you know you’d be gunning for an acting career?
J.M.: It was always a childhood dream, and then during my senior year in high school, I played Jud in our production of Oklahoma. I loved it.

PM: What’s one thing people might be surprised to learn about you?
J.M.: My first audition at CMU, I didn’t make the cut, and I wasn’t accepted into their acting program, so I attended the University of Pittsburgh for a year. I worked my butt off doing theater, auditioning for every- and anything. At the end of that year, I auditioned again at CMU and was one of 17 students selected for the acting program.

PM: What was it like growing up in Mount Lebanon?
J.M.: I loved watching monster movies and Boris Karloff films. My dad had to hide all the Stephen King books. I wanted to be those scary characters. I attended St. Bernard School in Mount Lebanon, and one of the nuns told our class that “God could move mountains if your faith is pure.” So I started getting up at 5:30 a.m. to be ready for 6 a.m. Mass. Weeks on end, I would pray that God would make me into a werewolf. Twenty-five years later I play one on TV.

PM: Which brings me to your next project about prayer.
J.M.: It’s in development right now that I’ll be part of the cast for the new CBS series called “Livin’ on a Prayer,” a Pittsburgh-set comedy about a couple of working-class characters. During production they have me wearing Steelers gear on set— you’ll have to look for the show in the fall.

This article appears in the June 2010 issue of Pittsburgh Magazine.
Categories: Arts & Entertainment