Seth Meyers never misses a chance to talk up the 'Burgh if his "Late Night" guest has a hometown connection.

Manganiello also blew Meyers away with his story about a run-in with a very famous Pittsburgh Steelers safety. Of course, the pair also engaged in a little Pittsburghese. (Meyers' dad is a Pittsburgh native.) 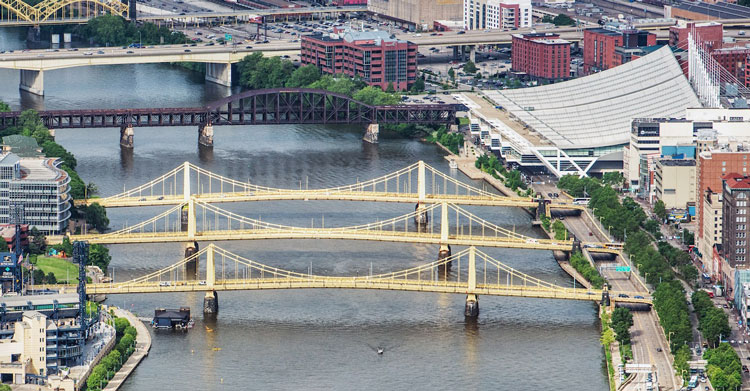 #BridgeDebate: Time for a change of color?

Pittsburghers are a pretty easygoing bunch — except when you touch our bridges, apparently.

As part of an upcoming rehabilitation of the Sister Bridges, Allegheny County Executive Rich Fitzgerald and Mayor Bill Peduto asked citizens if they’d like to see The Andy Warhol Bridge with a silver finish, the Rachel Carson Bridge colored green and the Roberto Clemente Bridge painted “Pittsburgh yellow.”

So far, Pittsburgh’s not having any of it — of the 10,000-plus who’ve weighed in on the county’s online poll, roughly 80 percent voted to keep the bridges the same hue.

Before you join in on the backlash, take a minute to see the reasoning behind the proposal. Karamagi Rujumba from the Pittsburgh History & Landmarks Foundation tells the Pittsburgh Tribune-Review that painting the Carson Bridge green would embody Rachel Carson’s environmental message.

However, he did suggest changes to the plan, saying that the Clemente should be black-and-gold, while the Warhol would look better coated in “a multitude of colors.”

“If those bridges were named Clemente, Carson and Warhol, and the city and the county have designated those bridges as monuments to those individuals, we think they should reflect their lives,” he tells the paper.

OK, now you can defend your turf — check out the poll and weigh in.