For two sisters who grew up in Highland park, the winter of 2005 brought new romantic beginnings.

For two sisters who grew up in Highland Park, the winter of 2005 brought romantic new beginnings. During this, the coldest season of the year, both Jessica and Clare Dattilo’s significant others got down on one knee and asked for their hands in marriage. Right away the sisters, two years apart in age, set out to plan their weddings, which ended up being, like the two of them, quite different. "Clare’s wedding was more formal and Jessica’s was slightly less-their personalities showed through," says their mother, Louee Dattilo. Despite their differences, there are some things that the sisters do share-love of family, fondness for their childhood home and respect for the church in which they were raised. It was there, Sacred Heart Parish in Shadyside, that both sisters were married, and when asked how they knew their husbands were "the one," they had the same answer-"How comfortable he was around my family." Here are their wedding stories, separate, yet linked-just like the brides. 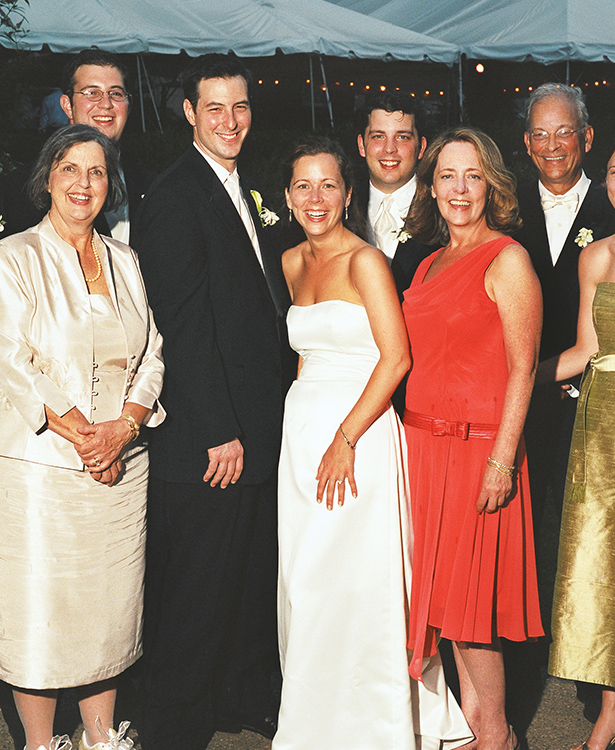 Like water, love knows no boundaries. Which is why, when Robert Gonzalez proposed to Jessica Dattilo, it’s only appropriate that he was standing at the edge of the ocean. "We were spending a weekend away in Newport, R.I., and on Sunday morning we went for a walk by the water," recounts Jessica. "There is a huge staircase that drops off into the ocean, and that’s where he proposed." Coincidentally, the couple first met at a popular Pittsburgh watering hole and hit it off over drinks with mutual friends. Seven years later, they were married in a traditional Catholic ceremony, and for the outdoor reception that followed at Phipps Conservatory and Botanical Gardens, "Rain was on my mind," says Jessica. Instead, she got record high temperatures on that midsummer night, and it was rain that came to the rescue. While guests were dining under tents, a brief shower cooled things down just in time for dancing. Now, Rob works as an Internet recruitment consultant with Monster Worldwide, and Jessica is a real-estate paralegal with attorney Scott King. They live in South Boston, appropriately, less than a mile from the water.

Ceremony: Jessica and Rob were married by Rev. Robert Grecco at Sacred Heart Parish, where Jessica’s grandmother was a Eucharistic minister and attended Mass daily for years, and where Rob’s parents still regularly attend. 412/661-7932, sacredheartpittsburgh.org.

Rings: Rob gave Jessica an antique Cartier platinum eternity engagement setting, handed down through the generations from his maternal grandmother, with a diamond from Simms II Jewelers in Winchester, Mass. The wedding band, also from Rob’s grandmother, is inscribed with his grandparents’ initials and their wedding date, 5/30/36. Rob’s white-gold band is from Simms II Jewelers. 781/729-6741.

Tuxedos: Rob, his groomsman and his best man all wore black tuxedos with ivory shirts, vests and long ties from After Hours Formalwear in Ross Park Center. 412/366-3989, afterhours.com.

Linens: All Occasions Party Rental, the exclusive vendor for Phipps, provided tents, white cotton linens, satin striped tablecloths and silver and white china. White twinkle lights and candles decorated the tables and the inside of the tent. 412/788-8100, allparty.com.

Flowers: Leon from Botanical Designs by Leon (412/621-3233) provided green and white hydrangea, pom-poms and bells of Ireland arranged by Truyen Tran, a friend of the couple.

Cake: Green and white flowered petit fours from Prantl’s Bakery in Shadyside were set up on a tiered cake tray in the shape of a wedding cake, and guests also enjoyed Italian cookies made by family and friends of the couple. 412/621-2092.

Transportation: The bride, groom and their families traveled to the reception in a black stretch limousine, and school buses from Laidlaw Transit Inc. provided all guest transportation. 412/431-8747, laidlaw.com.

Honeymoon: The couple spent a relaxing week in Cape Cod at Ocean’s Edge Resort & Club and took day trips to beaches such as Provincetown, Wellfleet and Martha’s Vineyard. 508/896-9000, oceansedge.com. 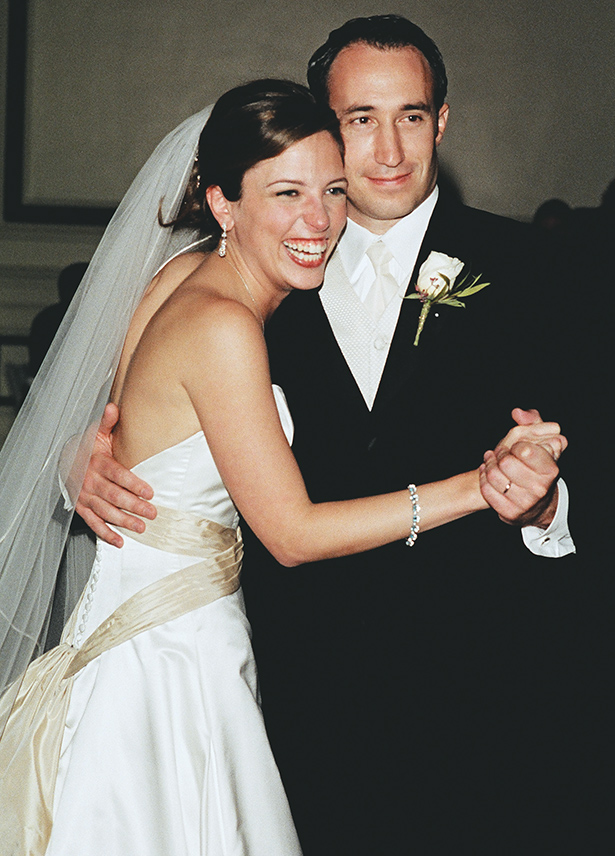 When Leigh Valudes proposed to Clare Dattilo in New York City’s Central Park, he had romance in mind. At that time in February, artists Christo and Jeanne-Claude had installed more than 7,000 large, free-flowing pieces of bright orange fabric on poles at 12-foot intervals on every walkway in Central Park. In contrast with the stark, leafless trees and steely gray of the city, the panels gave the park the illusion of a fantasy land-a place in which Leigh, following a romantic horse-and-carriage ride, found an unoccupied bench, got down on one knee and asked Clare to be with him forever. The vibrant saffron color of "The Gates" must have left an impression on the couple-they used brilliant-orange calla lilies and Gerbera daisies in their wedding nine months later. They also incorporated traditions from Leigh’s Greek background and Clare’s Italian roots, some of which overlapped. "We used Jordan almonds as favors. In traditional Greek weddings, they are placed in little bags in odd numbers to symbolize how the newlyweds will remain undivided, and in Italian weddings, the five almonds signify health, wealth, happiness, fertility and longevity," explains Clare. The couple now reside in Falls Church, Virginia where he is a project manager with an architectural firm, and she is an e-commerce manager with America Online.

Rings: Leigh chose Clare’s three-stone, 2.2-carat princess-cut engagement diamond from Blue Nile (bluenile.com) and had it set in white gold by a jewelry designer in Reading, Pa. The couple’s matching white-gold bands from Jared (jared.com) are inscribed with the date of their wedding.

Reception: The reception was held at the stately Soldiers & Sailors Museum in Oakland, which ended up being perfect for both the bride and groom. "I wanted a location close to where I grew up, and he has a love for history-it was one of his majors in college," says Clare of the museum, where uniforms and paraphernalia from every American war are displayed. 412/621-4253, soldiersandsailorshall.org.

Transportation: Molly’s Trolleys delivered the bride and groom separately to the church. Lighthearted music such as "Going to the Chapel," and other wedding favorites played, and the wedding party had a champagne toast before arriving at the reception. 412/281-2085, mollystrolleys.com.

Flowers: Flowers in the Attic arranged roses, Gerber daisies and calla lilies, all in fall colors, for the bridal party. 412/798-2200, flowersintheattic.com.

Favors: Guests also went home with full-sized bottles of wine from Nissley Vineyards & Winery estate in Lancaster, Pa., where the groom grew up, and bags handcrafted by the mother of the groom filled with Jordan almonds. 800/522-2387, nissleywine.com.

This article appears in the March 2006 issue of Weddings.
Categories: Weddings