Harrison should shut his mouth, but not because he is wrong. 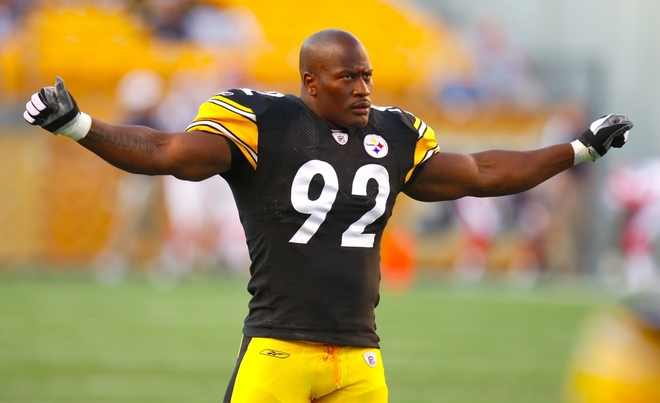 Two weeks ago, James Harrison erased entire hours from the life of Cleveland Browns quarterback Colt McCoy, and no matter how much you enjoy football, that is horrific.

And yet Harrison's vivisection of McCoy's face mask was far from the most disturbing thing that occurred at Heinz Field that night.

These are the indisputable facts: McCoy went down immediately in a dreadful convulsion. He writhed in pain and was (caps lock initiated) GRABBING HIS HEAD. The Browns medical staff approached him, and, according to their own public defense, seemed to think the major point of concern was his hand. Perhaps they thought he stubbed a finger while frantically grabbing his head in excrutiaing pain.

The Browns initially offered a preposterously vague response about the sideline evaluation, saying that “proper medical procedures” were followed before admitting mid-week that McCoy had not administered the rudimentary Sports Concussion Assessment Tool until the morning after the game, when he could not recall anything that happened after the hit. On the sidelines, where McCoy remained for less than four minutes, the trainers were satisfied that McCoy was “lucid and talking,” a spot-test that has slightly less credibility than the sophisticated “How Many Fingers?” neurological examination and slightly more than the preferred method of studio wrestling referees—the “Three Strikes and You’re Out” sleeper hold test.

McCoy was the epitome of someone who a medical professional should assume had sustained terrible head trauma. And yet he was thrown back to the lions while his brain was in its most vulnerable state. According to Dr. Micky Collins, a UPMC physician who handles more than 4,000 concussions cases per year, including many NFL and NHL players, the No. 1 danger to an athlete who has suffered head trauma is simple: sustaining another hit before the brain has had time to recover. A second hit can have disastrous, even irreversible neurological consequences.

Why didn't this story lead ESPN and The NFL Network for the entire week?

Why isn't the NFL being taken to task for its incoherent, nebulous policy on the sideline evaluation of head injuries?

Why are we not being inundated with hyper-slowmo, frame-by-frame replays of the medical staff's evaluation of McCoy, like we are with Harrison's hit?

The league dangled the possible suspension and Harrison predictably erupted. He keeps giving Goodell's administration exactly what it wants—a willing bad guy. A fuming, hulking villain. Harrison is The Iron Sheik to Goodell's Vince McMahon. Every time Harrison expresses outrage, it gives the NFL the opportunity to control the narrative, to show the scrambling of poor Colt McCoy's brain in Animal Planet-style slowmo, to have their chuckling pundit minions debate Harrison's intent over b-roll footage of the man mean-mugging reporters at his locker. Harrison is Tony Montana.

The damage control has gone swimmingly. The professionals who truly put McCoy's life in danger escaped the spotlight and the insipid debate that followed in the media sadistsphere centered almost entirely on Harrison’s previous indiscretions. The league didn't like what was being said, so they changed the conversation.

It doesn't matter where public opinion falls on the hit, which was indeed vicious. The point is not what fans are talking about. It's what they're not talking about.

Despite all the blustering, the NFL knows that it will never eliminate head trauma from the game of football. If you think that safer helmets are the answer, or some vague, long-lost notion of "respect" between players, or the banishing of self-aware thugs like Harrison, you are blissfully delusional.

First, there is not a helmet, real or theoretical, that will stop a player's brain from moving inside his skull, which is what actually causes a concussion. Some analysts still seem to think that a concussion is a skull injury—something that can only be sustained when manic, bat-shit linebackers use their helmets as battering rams on God-fearing, discount-double-checking quarterbacks. It is not. A hit to the sternum from the blindside can be just as devastating if the recipient’s head moves violently. Second, as to the issue of "respect," players have been punching testicles and biting fingers at the bottom of piles for the past five decades. No matter how many prayer circles are congregated in the post-game, football will always and forever be a game of delightfully malicious intent. At least Harrison is honest about his place in the ecosystem. But the league-sponsored phantasm that the NFL's concussion epidemic starts and ends with self-admitted madmen like Harrison is perhaps the most naive notion of all.

A week before Harrison's mind-eraser on McCoy, teammate Troy Polamalu sustained a concussion on his own Tasmanian volition. Polamalu didn't suffer a headshot on a crack-back block or any other scary-sexy human car crash. He merely dove at a ball carrier's legs and cracked his cranium off a kneecap. It was routine. A dull horror. It was exactly the kind of play that truly scares the NFL brass. One of the true faces of the league, a terrific man and (more importantly) a terrific salesman of officially licensed merchandise and Head & Shoulders shampoo, was concussed on a tackle that happens 100 times each and every Sunday.

Many frustrated Steelers fans seem to think that Goodell wants to "put all the players in dresses" and other conspiratorial nonsense. I doubt Goodell has that level of humanity. The league knows that its mystique will always be heavily anchored to an aura of controlled violence. Picture a toothless Jack Lambert pumping his legs, breath pluming from the blackness between his molars, looming over the offensive line like a specter, body-slamming a poor sap to the AstroTurf. This is the enduring image of the NFL that Goodell would never dream of tarnishing.

Despite all the white noise, Goodell and his company men are not interested in safety. They know it's an impossibility. What they want is the appearance of safety—the belief that all would be well if it weren't for guys like Harrison.

“It's these damn barbarians that are the problem, you see?”

If only it were so simple. If it was, Mike Webster might still be here. Ernie Holmes' smile might have never turned into something sinister. Dave Duerson might be in a studio booth. Justin Strzelczyk might be deep in the woods of western Pennsylvania with his hunting rifle, building a campfire.

If the league put its medical personnel under the same level of scrutiny it places on its players, the football field would be a much safer place. If a tragedy ever occurs on live television, it won’t be a linebacker with blood on his hands—it will be the Yes Men on the medical staff and the double-talking autocrats at the league office.