Why those vilifying the Steelers' unhinged linebacker are missing the point. 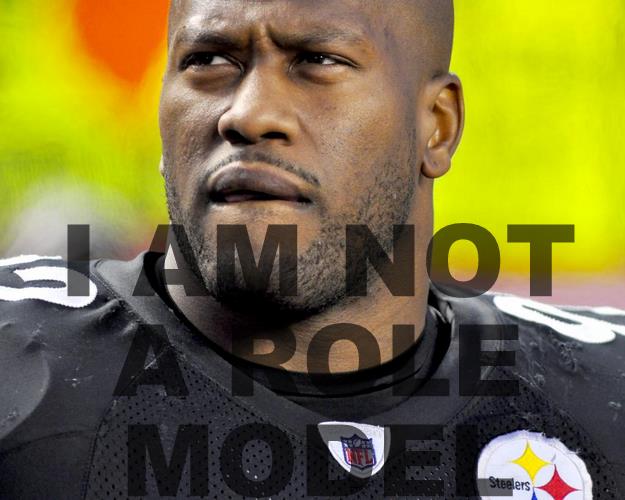 Greased up like a truck-stop stripper and holding akimbo handguns across his chest, Steelers linebacker James Harrison made a visual and verbal nincompoop of himself in this month's Men's Journal. In his tirade against Commissar Goodell, the New England Patriots and even his own teammates, Harrison somehow made amateur conspiracy theorist Rashard Mendenhall seem comparatively sane.

The kerfuffle kicked off a week-long marathon of rosary-clutching and revisionist history from an understandably punch-drunk fanbase. First it was the Super Bowl hangover, then Mendenhall's goofball Truther philosophizing and Hines’ failings with the DUI-decimal system, and now Harrison is sabotaging his own team?

This has been a summer of unprecedented numb-nuttery, that much is certain. But those who say that the moral fabric of the Steelers is tearing need to grab a mirror. Or a history book. Harrison's verbal barrage is media kindling, and nothing more. Unlike any other sport, overall team chemistry doesn't exist in the NFL. The idea of it makes for stirring NFL Films montages, but in reality, football locker rooms are segmented into small clusters of friends—the offensive linemen, the tight ends, the defensive backs.

Ask any player who his best friend on the team is and 9 out of 10 will say a player of their same position. Several defensive players have told me that they don't even watch the game when the offense is on the field.

The guiding hand of the Steelers was never Harrison, or even Roethlisberger. The leadership and personality of the team starts at the top with head coach and Wikiquote generator Mike Tomlin, and it ends with guys like Farrior and Polamalu. Worrying that the moral fabric of the Steelers is disintegrating because of Harrison's dumb-out is like worrying that the intellectual integrity of an entire 3rd grade class is crumbling because one mouth-breathing turtle-enthusiast won't stop eating Elmer's glue like it's fro-yo. 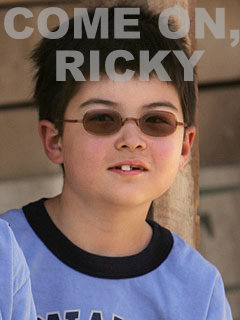 If you’re still feeling queasy about an internal rift, remember that the Steelers won a Super Bowl in 2005 when their defensive leader, Joey Porter, and their offensive leader, Roethlisberger, wouldn’t have peed on the other guy if he was on fire.

If the Internet had existed in the 1970s, several members of the Steel Curtain would have Photoshop’ed pictures of Terry Bradshaw chewing straw and riding a donkey around Station Square and Tweeted them to the world. Folk hero Jack Lambert would routinely threaten rookie running backs with disembowelment at training camp.

What do you think you’re watching on Sundays, anyway?

Harrison should undoubtedly be ashamed of calling Goodell a homophobic slur, but just as reprehensible are the media opportunists who have jumped at the opportunity crucify him when they’re just as culpable for the deification of jock culture. Walk into any locker room in professional sports and you’ll hear the F-word tossed around freely. Yet the mainstream media is all too eager to engineer puff pieces and cooked-up redemption stories about the very same athletes they see the uncut side of every single day.

Writers play dumb and deaf, and sell the fans the stories they want to hear. It’s dishonest, but inevitable given the media’s co-opting in the Sports Industrial Complex. So when a player is an unabashed animal and says as much right to our faces, “I am mean, I am a beast,” we recoil. How can this be? This is not my beautiful house. This is not my beautiful linebacker.

The visual of an armed Harrison in the Men’s Journal article wasn’t too far from the truth. Harrison is a hired gun; a hitman. Sometimes hired guns also happen to be giant sons-a-bitches. Often the best ones are—like Greg Lloyd, Kevin Greene, Ernie Holmes, Joe Greene, Lawrence Taylor, and other cement heads.

And what of Jack Splat? We mythologize Lambert, a solid man off the field, no doubt. But why is he a legend? Because he wore a t-shirt under his pads that warned, "I am a F****** Maniac." Because he snarled like an animal and said despicable things about opponents' wives and mothers. We love him because he was so intoxicatingly terrifying, so primal and real. He, like Harrison, was honest about his brutality. 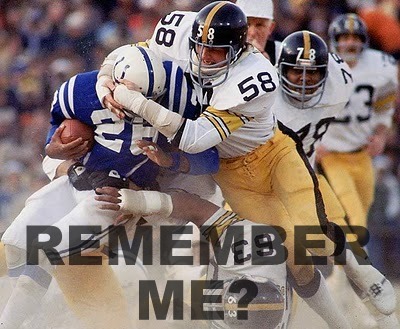 So much of what Harrison has said about the state of the NFL today is a carbon copy of what Lambert warned us of in the ‘70s:

"Yes, I get satisfaction out of hitting a guy and seeing him lie there a while."

"I believe the game is designed to reward the ones who hit the hardest. If you can't take it, you shouldn't play."

Those quotes are from Lambert, but are an echo of Harrison’s diatribes.

Only now we’re supposed to feign horror when Harrison admits to getting a cathartic rush from knocking an opponent senseless, because neurological science has finally caught up with the dirty little secret we knew all along. The house lights have come up on the peep show, and here we all are: the beasts and the voyeurs. So what now?

Harrison is everything we say we want in a football player when we’re on the bar stool or in the recliner: He didn’t merely play all of last season with a herniated disk in his back, a debilitating injury that required him to get a discectomy after the Super Bowl. He played every single series last season. The majority of NFL players would been laid up, but Harrison was laying out quarterbacks, fighting through spasms and seizures without saying a word about it.

And for what? Why, at age 32, would he risk the rest of his abbreviated career? For you? For your message board egoism? No. He played because he knows nothing else. He doesn’t know where else to put his seething anger.

If you can’t accept that moral ambiguity, ask yourself this: What kind of person does it take to do what Harrison does? What kind of mad multimillionaire launches head-first into a 200-pound man at top speed, knowing full well that the price is a hot knife tearing through the tendons of his back?

In the sea of decontextualized nonsense that is quoted in the Men’s Journal profile, Harrison said the most disturbingly honest thing I’ve heard out of the mouth of an NFL player in a long time. “When you hit a dude hard, you feel it, too, and the Steelers go at play-to-die speeds. But if, God forbid, I wind up having brain damage, so be it.”

That’s the NFL as Coca-Cola, Sprint and Roger Goodell never want you to see it, and the most heartbreakingly honest admission from a Steelers player since the late Dwight White told Time magazine, "There's no question that I'm schizoid. I might be three or four people. I know I can be evil."

As long as Harrison keeps his idiocy and his firearms confined to print and not aimed at a police helicopter, the Steelers will be happy he's the mean, mad asshole in black-and-gold and not any other color. And if you think the Rooneys should take the moral high ground and ship Harrison out of town because of some long-lost phantasm called “The Steeler Way,” Google "Ernie Holmes manhunt" for a history lesson.

Apparently, there’s only one mortal sin in today’s NFL. You can be a lout, a beast, a madman, even a remorseless executioner. You just can’t admit to it. Because once you break down that fourth wall—once you turn to the audience and wink, “I am not an actor; I am a bad man,” the whole grand spell is broken.