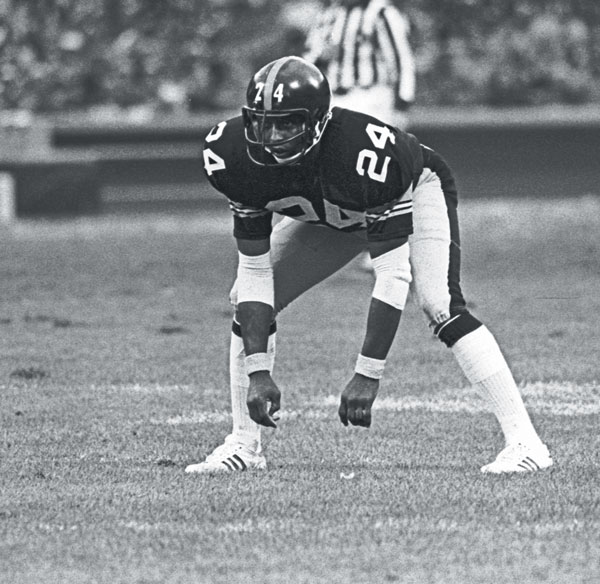 Photo courtesy of the Pittsburgh Steelers

When J.T. Thomas looks back at his career with the Pittsburgh Steelers, he still marvels at how many gifted players shared a locker room with him in those days.

“With all the talent that was here, it was like fate and time intersected,” he says, deftly and succinctly putting his point into perspective. “You couldn’t afford that team today. There were great players everywhere you looked.”

As a defensive back on that mighty Steelers’ team of the 1970s, Thomas—an excellent player in his own right—battled Hall of Famers such as Terry Bradshaw, John Stallworth and Lynn Swann every day in practice. He’s convinced that they all made each other better players, and that made Sunday afternoons much easier.

Thomas, who has lived in Monroeville since 1975, found success in the restaurant industry after his playing days. He and former teammate Larry Brown brought Applebee’s restaurants to the area back in the late-1980s. Last year, the 56-year-old Thomas opened Red, Hot & Blue, a restaurant that features Southern cuisine, at The Waterfront in Homestead.  Recently, Pittsburgh magazine caught up with him for this question-and-answer session.

PM: Does anyone call you James instead of J.T.?
J.T.: Whenever someone calls me James, I don’t really hear it. I respond on a delayed basis because I’m not used to hearing it. I’ve always been called J.T.  My mother has always called me J.T., and whatever your mama calls you, that’s what you are.

PM: What was it like for you being the first African-American football player at Florida State back in the early-1970s?
J.T.: At the time, segregation was still paramount in the South. So I knew I wasn’t going there just for me. I knew I was paving the way for a lot of people. I was being watched by a lot of people, and I got a lot of support from people in the states of Florida, Georgia and Alabama. It was breaking down a barrier, and people looked at it and said, “He has to succeed.” We were being told we couldn’t compete on the field or academically in the classroom. So failing wasn’t an option. That was my mindset. I had to succeed. I was very much aware of the responsibility.

PM: What’s something about being a football player that the average person probably doesn’t know?
J.T: When you hit someone on the field, there’s a transmission of character. When you tackle a guy or you’re hitting him constantly, you see his fears and anxieties, his intensity and his intestinal fortitude in that process. You want to know why athletes are so close? They have this connection that comes from constantly coming in contact with each other. You can play against a guy for years, and you might not know him, but you do know him. Guys in the NFL, I knew their character, I knew their strength, I knew their anxiety, and I knew their determination. All of that was because I made contact with them in terms of hitting. In football, there’s this automatic release of all that.

PM:  As a defensive back, was intercepting a pass your greatest joy?
J.T.: An interception is always great, but the biggest joy for me was knowing that I had my guy covered and the quarterback couldn’t throw to him. But people don’t always see that. Everyone sees that we got a sack. Well, do you know why? Because I was on my guy like stink on crap. Some guys, maybe interceptions were their motivation, but my thing was, “You’re not going to catch the ball today.”

Full Name: James T. Thomas Jr.
Date of Birth: April 22, 1951
Position: Defensive back, cornerback/safety
Uniform Number: 24 Years as a Steeler: 1973-1981
Career Highlights: All-American at Florida State and the first African-American to play football at that university; selected by Pittsburgh Steelers in the first round of the 1973 NFL draft; a four-time Super Bowl champion; intercepted 19 passes as a Steeler, including a career-high five in 1974; played in the Pro Bowl in 1977.

This article appears in the January 2008 issue of Pittsburgh Magazine.
Categories: Sports