It’s Not Just the View: How Greenspaces Can Make Our Lives Better

Scenic Pittsburgh has created an urban haven out of a vacant lot near Allegheny General Hospital. It’s a model for what could be done for Pittsburgh's many vacant spaces — if the city, nonprofits and communities band together. 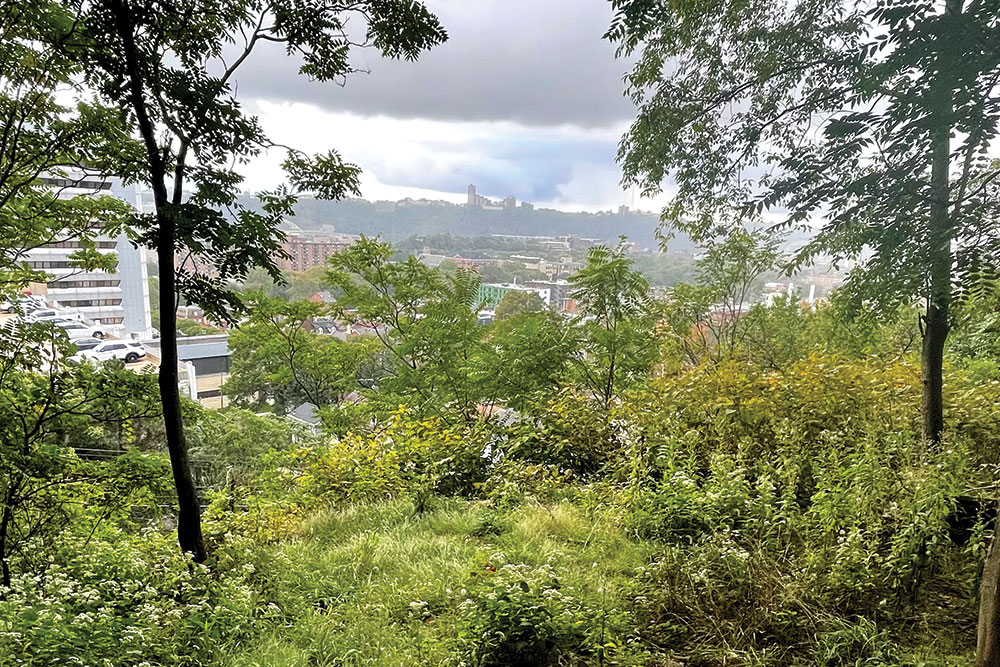 Between Allegheny General Hospital and the North Side homes that overlook Downtown, there’s a small hill covered in trees and overrun by Japanese knotweed. From a distance, the terrain — a pizza slice wedged between Fountain and Henderson streets — doesn’t look like much. And, at just a little larger than 2 acres, it hardly is much.

Nevertheless, the property in 2016 caught the eye of Dave Demko, a resident of the nearby Mexican War Streets. He had become familiar with Fineview’s wooded areas while running through the neighborhood. This piece of land, in particular, stood out from the rest.

Demko — the assistant director of Scenic Pittsburgh — has an eye for greenspaces.

“There used to be houses on the property, but if you could get into the property, there was a great view to be enjoyed,” Demko says. 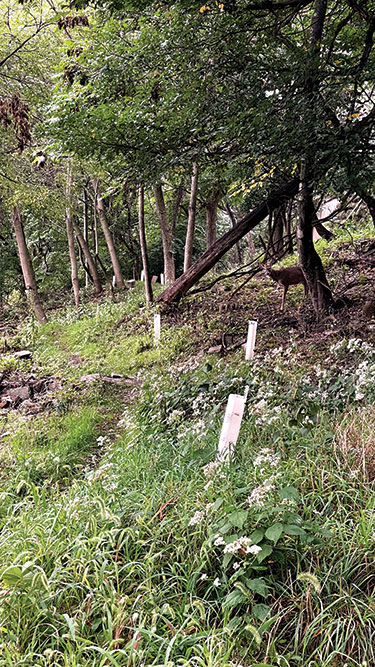 The property itself, though, wasn’t quite as appealing to the eye. Houses torn down in the 1950s and ’60s left behind a trail of crumbling cinder blocks and broken bricks. In the decades that followed, the space turned into a dumping ground for empty bottles, old tires and unwanted furniture.

But for Scenic Pittsburgh, a nonprofit that protects natural and man-made beauty in 10 southwestern Pennsylvania counties, the neglected and undevelopable land offered a project outside its zoning and legislative work.

“We were looking for something on the ground — something people could point at and say “Yeah, this is Scenic Pittsburgh,’” Demko says.

Scenic Pittsburgh in 2017 purchased one lot on the property — previously owned by the Pittsburgh Public School District — and leased the remaining area from the city through its Adopt-A-Lot program. To carry out the project, the organization partnered with other nonprofit organizations experienced in on-the-ground work. Allegheny Cleanways removed garbage that had collected for decades; Landforce installed trails and a wooden handrail to make the property’s stone staircase more accessible. After hearing about the project through the Fineview and Perry Hilltop Citizens’ Councils, local residents also volunteered to help clean the property.

Officially named Fountain Street Overlook, the greenspace opened to the public in June. By that point, Scenic Pittsburgh’s Executive Director Mike Dawida had already started thinking about turning other lots in the city into usable greenspaces.

Pittsburgh and the surrounding areas “have lots of hills and lots of scenic view sheds, as we call them,” says Dawida, a former state senator and house member as well as former chairman of the Allegheny County Board of Commissioners. “It occurred to me that there’s a niche there that big parks generally don’t fill. Most of the time when you have a big park, they tend not to have a lot of places for you to sit and just look at the view.”

Pittsburgh’s population decline in the 1970s created tens of thousands of vacant lots throughout the city. While initiatives such as the Greenways for Pittsburgh program and the Adopt-A-Lot program aim to preserve and maintain vacant lots for public use, plenty of overgrown land still goes unused.

“We have a major problem in Pittsburgh about this land, and there are no really easy or convenient ways to either care for it or have it pass into the hands of people who want it or need it,” says Kate Angell, director of communications and outreach for Scenic Pittsburgh.

When located in cities, greenspaces increase nearby property value and can reduce crime rates, Angell says. They also provide benefits to the environment, such as improving the temperature and cleaning the water. In an area such as Pittsburgh, where flooding is common, additional greenspaces could absorb excess water leading to lower water levels altogether.

“There are a lot of services that greenspaces are providing that we just never think about,” Angell says.

While greenspaces are known to have physical (reduction of air pollution and increase of recreation opportunities) benefits, studies show that people are also impacted by greenspaces just by looking at them. One study published earlier this year in the academic journal “Frontiers in the Public Health” estimates that an increase of urban greenspace over the past two decades could have prevented as many as 34,000 deaths in people older than 65 living in the country’s largest cities. 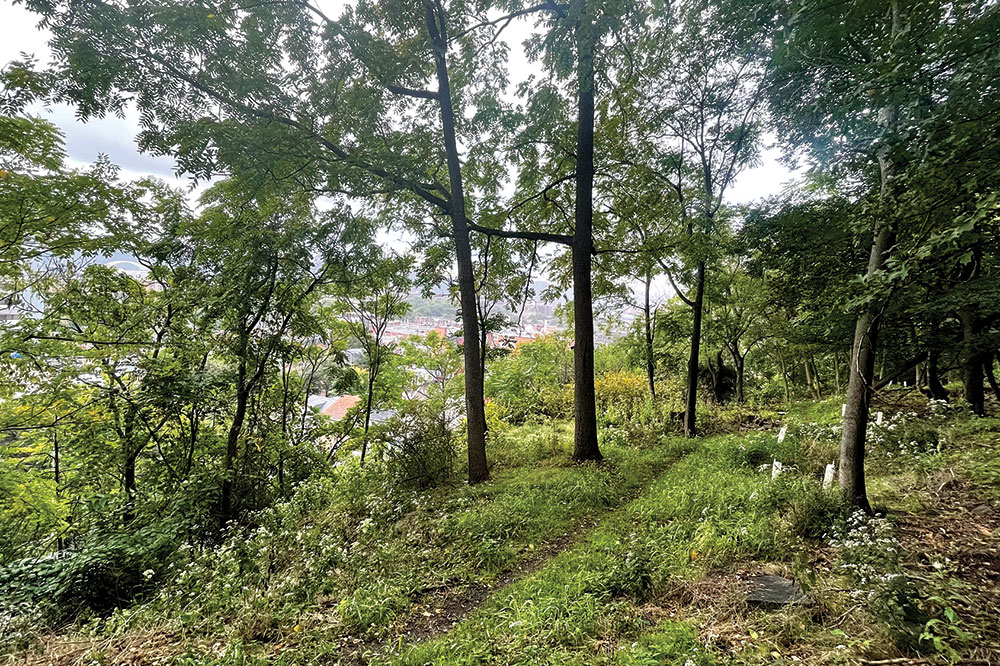 But whether Pittsburghers know the science, they have first-hand experience.

“The pandemic showed us how important it is to get outdoors — and that’s how we get healthy … we get moving, we get outside, and we connect with our community,” says Joanna Deming, executive director of the Fineview and Perry Hilltop Citizens’ Councils. “I think that these spaces and these connections are just kind of critical to that access and removing barriers for people to really engage deep in their communities.”

Scenic Pittsburgh’s next greenspace aims to do just that by connecting Denham Street through Lanark Street to the Fineview Park playground. The goal is to increase park access to residents in Allegheny Dwellings and the surrounding areas. The Citizens’ Councils had already outlined the project in its 2018 community plan and suggested the project to Scenic Pittsburgh. A soft opening was scheduled for Oct. 22.

Similar to the Fountain Street Overlook, the Lanark Street greenspace involves the work of several Pittsburgh’s nonprofits, more formally known as the Greenspace Restoration Partnership. In addition to Landforce, Allegheny Cleanways and the Fineview and Perry Hilltop Citizens’ Councils, the partnership also includes Grounded, an organization that helps communities claim and repurpose vacant lots. Dawida expects the partnership to grow as more greenspaces are created throughout the city and surrounding areas.

Next on the list, the Greenspace Restoration Partnership plans to restore a property in the Hill District. A more specific site will be chosen by the end of the year, following conversations with people in the community and the city.

“We look for the properties that are unlikely to be developed because of their steep slope and location. Our goal is to enhance housing development that could happen in the future,” Demko says.

Fountain Street Overlook is open to the public from dawn to dusk, though more work is still being done to clean up garbage and shards of glass.

“They always say it’s going to take you as long to lose weight as it did to put it on. Well, that land has been neglected and full of garbage for decades. So, every time it rains, a little bit more comes up, a little bit more is exposed. We’re talking about a long-term project and a long-term strategy,” Angell says. 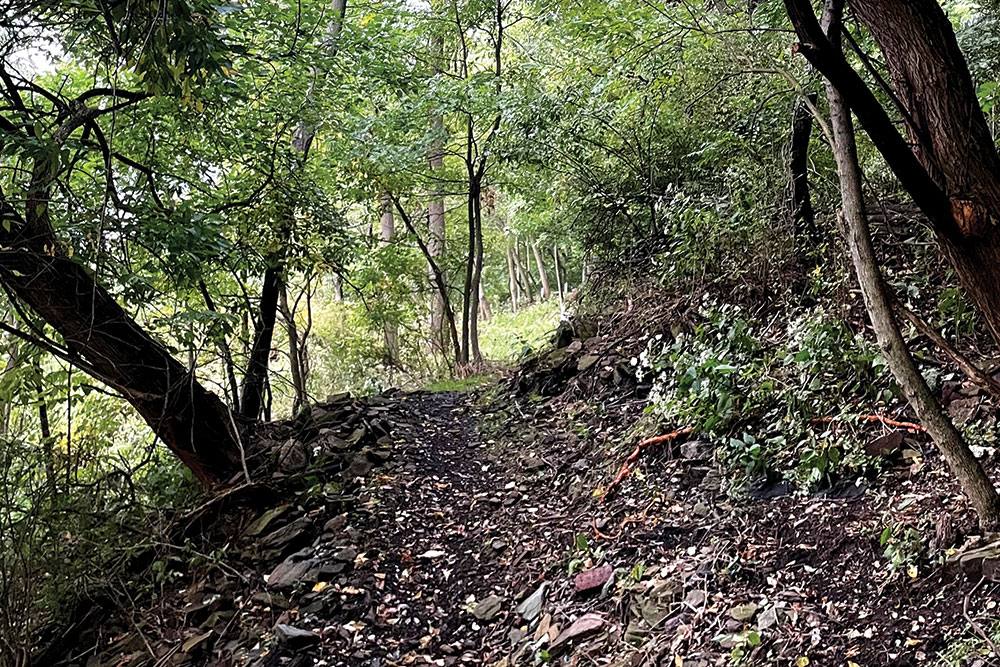 The Greenspace Restoration partnership will replace invasive plants such as Japanese knotweed and Asian honeysuckle with Elderberry and Mulberry bushes for slope and erosion control.

As for what happens next, that’s for the community to decide — though people from the Greenspace Restoration Partnership have their guesses.

“There are lots of us old people, and we like to sit and watch the sunset,” Dawida says.

Others, like Thomas Guentner, the director of land stewardship at Landforce, hope it will also be a place where kids can use their imaginations — and learn about the past.

“[I hope] kids wonder about what was there before, [then] open up a history book down at the library about the neighborhood.”

Kaitlyn Nuebel is a writer and Pittsburgh transplant piecing together stories of the city and its people one conversation at a time.

This article appears in the November 2022 issue of Pittsburgh Magazine.
Categories: Community Feature, From the Magazine, Hot Reads