It's All Very Suspicious 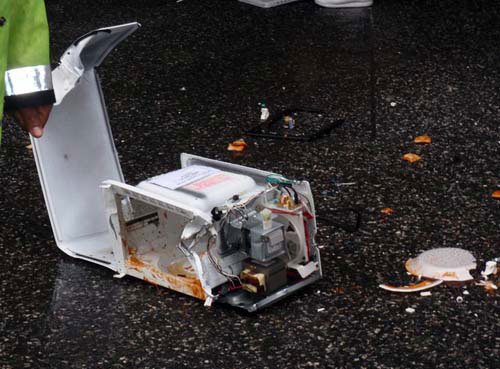 During the Pittsburgh Marathon this past month, you recall the police detonated a suspicious microwave within blocks of the finish line, only to find it contained ravioli.

Chef Boyardee murdered in plain daylight. Bits of ravioli, excuse me, REMNANTS of ravioli scattered on the sidewalk, a chilling reminder that stuff left behind is future detonated stuff.

Perhaps only one day later or so, a man left his bag in Mellon Square following a press conference held there. The area was cordoned off by police set to deal with the "suspicious, unattended bag" when the owner of the bag showed up and asked about getting his bag back. Apparently he asked a woman to watch it for him while he ran a block down to see a friend. I guess the woman left, and with her departure, what was a "watched bag" instantly became a—DUM DUM DUM DUMMMMM—SUSPICIOUS PACKAGE. The bag was mercifully not detonated.

Then a week or so later, a woman left a child’s backpack on a PAT bus. The police were called in. The bomb squad was called in. Traffic cordoned off. The "suspicious package" was examined and determined to contain an iPod. "Police are investigating the incident."

Then just last week, this hilarious headline, "Pittsburgh Police Blow Up Suspicious Package; Find Pastries Inside." THEY KILLED JENNY LEE! The box was a pastry box, by the way.

In our cautious post 9/11 world where subways in London come under attack, where bus bombs claim lives half-a-world away on what seems like a daily basis, where plots are regularly thwarted against US interests, I understand why people are reporting "suspicious packages" to the police. The pastry box WAS left near the post office, after all.

At the same time, I have questions. When is a backpack just a backpack? When is a pastry box just a pastry box? When does a left-behind bag stop being a forgotten bag and become a "suspicious package?" When does a bag that turned out to be just a bag become an "incident" that needs to be investigated by the police? When is it okay to peek in the microwave and say, "Somebody done left their ravioli in there. HAH!"

Can I speak honestly? If I was on that bus and I saw that woman leave the backpack, I would have picked it up and handed it to the bus driver all, "Somebody left this back there." I know this because I have DONE this.

Is that stupid of me? Naive? Is that naivety going to bite me back someday in the form of a bomb in my face? I hope not. I like my face as it is.

While I do understand the cautiousness, and the shock and awe reaction that results from that cautiousness when robots show up to blow stuff up only to find delicious pastries inside, I don’t like the world this way.

I hate that people have to be that suspicious of what almost always turns out to be harmless. I hate that we don’t live in a world where we can feel comfortable in picking the pastry box up and tossing it in the garbage (after snarfing them down. FREE PASTRIES!). That we don’t just pick up the backpack and hand it to the bus driver. That we don’t laugh our butts off that someone left a microwave in front of the bus station, probably thinking to make themselves some lunch while waiting for the bus.

That said, if you’re one of those people who finds packages to be "suspicious," keep doing that. Maybe someday it won’t just be ravioli or delicious pastries and it really will be a pipe bomb.

But as for me, yeah if the box is wrapped in duct tape and ticking like Miss Mona Lisa Vito’s biological clock, I’ll find it suspicious, but otherwise, here in Pittsburgh, I’m probably going to first assume that stuff left behind is just stuff left behind. Not so much because I’m choosing to think that way; it’s just how I’m wired. My first thought is to instinctively pick it up and find its owner. That might change someday when my naivete is finally destroyed.

Either way, recent events have really driven home the fact that I should NEVER EVER EVER accidentally leave my purse behind while eating lunch in Market Square, because as sure as heck, I will return to find my iPod, my phone, my coupons, my wallet, and my makeup bag blown to high heaven.

That’s a two-dollar Febreze coupon I’m never getting back.

This article appears in the June 2010 issue of PittGirl.
Categories: PittGirl