It's All in the Family For This Musical Duo

The Pittsburgh Symphony Orchestra's only father-daughter team will break up this year when clarinetist Tommy Thompson retires. But his daughter, Allie, says she’ll keep her father connected with the people he’s played with for 50 years. 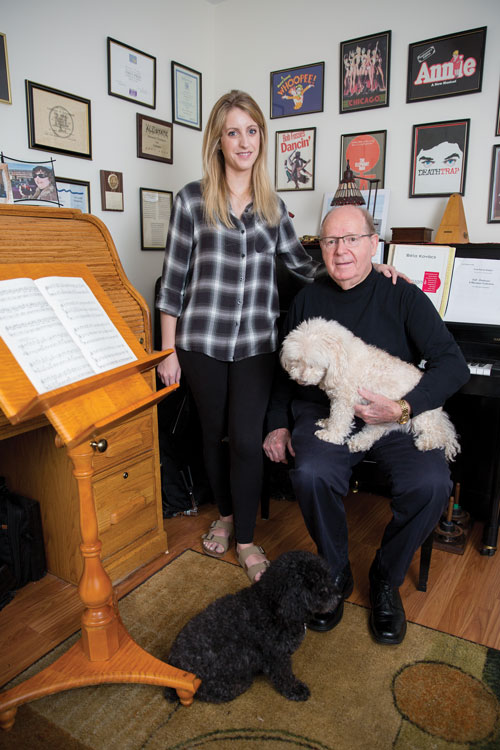 When Alexandra Thompson found out she had been hired as a cellist for the Pittsburgh Symphony Orchestra, the first person she called was her father.
It’s not unusual for a daughter to want to share good news with her dad. But her message carried an extra meaning: They were going to be co-workers.

Thomas “Tommy” Thompson is the PSO’s co-principal clarinet player and has been with the orchestra for 50 years. He was pleased to learn he’d be working with his daughter, but he mostly was proud she won the audition in a major ensemble after a grueling process trying to land a spot in about 20 different cities.

“It’s like your kid calling you and saying, ‘I just made the Pirates, or the St. Louis Cardinals,’ or ‘I’ll be starting pitching next week,’” he says. “It’s that gratifying.”
She’s proud of him, too: Her father will retire this fall after 50 years with the PSO. Reaching his 50th season is a milestone few mark in their career.
“Most people don’t stay with the same orchestra for 50 years,” he says.

Alexandra — who goes by Allie — will enter her second full season this fall; she previously was a substitute cellist.

Tommy grew up in a small town in Mississippi, where he says the only entertainment in town when he was growing up in the 1950s was watching the high-school marching band practice. For some reason, he fell in love with the tuba.

“I couldn’t even lift the tuba, so thank goodness I didn’t do that,” he says.

When he was about 8 years old, he started taking clarinet lessons from the high-school band director, who also was a church organist. “I went and took a lesson, and she gave me a book to practice and that was the start,” he says.

Coming from a musical family, Allie says her current career seemed to be her destiny — her mother plays the clarinet and is an elementary-school music teacher in the Mt. Lebanon School District, and her brother also played the clarinet. Tommy says the kids started piano lessons when they were around 4 years old.

Allie says her mom likes to tell the story of her daughter, at around age 7, coming to her mother and saying, “I have to play cello.” “I don’t remember that,” Allie, 26, says with a laugh. The Castle Shannon resident does remember, though, that she did not want to play the clarinet like the rest of her family. She wanted to be different.

Thompson, 76, of Mt. Lebanon, is an associate teaching professor in music at Carnegie Mellon University, where he’s also a conductor of the wind ensemble. He says he’ll continue his roles there.

He says it’s increasingly difficult for him to travel with the orchestra, especially on European tours, with bad knees. But he’ll miss the routine of a full-time job and his co-workers.

“I’ll miss the camaraderie everywhere, sort of like a big family,” he says. “We have our likes and dislikes and our fights, and still it is a family.”

“You spend so much time together — working, practicing and traveling. We share challenging moments and also moments of great joy,” he says. “When two orchestra members, like Allie and Tommy, are also related and have that shared history as well, it makes the connection deeper. Nothing is more important than family — and being a part of their connection is truly special.”​

Allie says she’ll miss the occasional carpooling and seeing her dad on a regular basis.

“Since he’s a wind player, he’s not here all the time, but I am, so when he’s not here I feel like I’m missing my best friend at work,” she says. “It’ll be hard when he’s gone.
“I don’t think he ever wanted to quit, so I think it’s a nice way to keep connected with the orchestra. I told him … I’ll keep him in the loop.”