It’s About the Warrior: Making Sure Veterans Never Feel They Are Alone

For some, the foundation offers camaraderie with those who have had similar experiences. For others, it’s the difference between life and death. 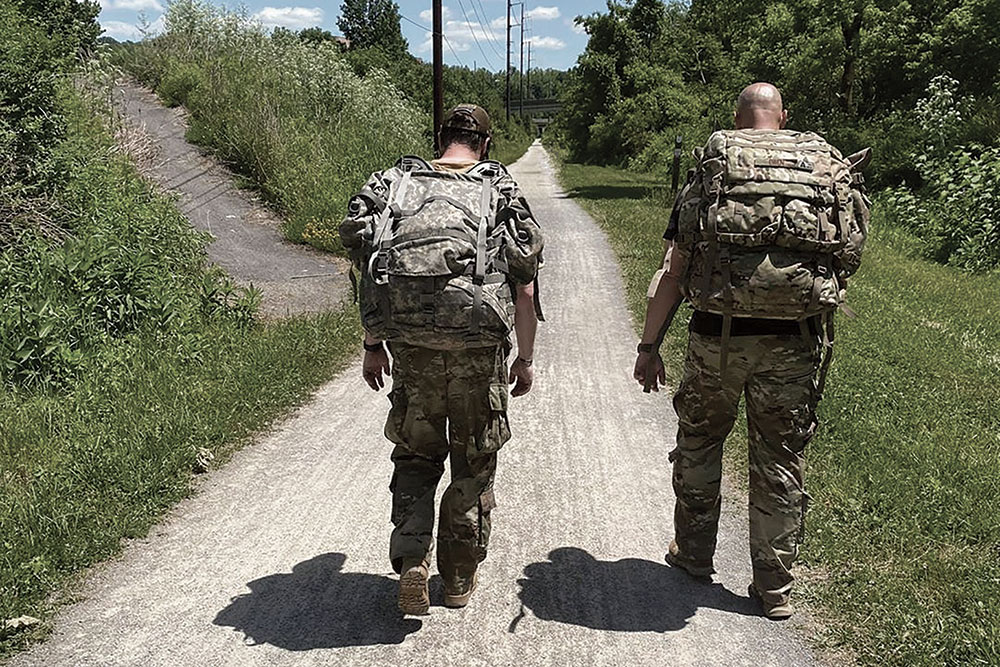 PHOTOS COURTESY OF IT’S ABOUT THE WARRIOR FOUNDATION

It started with an outing at the Olde Stonewall Golf Club in Ellwood City and an idea that would shape the next decade of Steve Monteleone’s life — and the lives of countless others.

Having served in the Air Force from 1986 to 1992, the 56-year-old Butler native reached a point in his life where he wanted to give back somehow; he says an interaction with two struggling Army vets planted the idea to help veterans, and a larger urge to “pay it forward” was fuel on the fire. 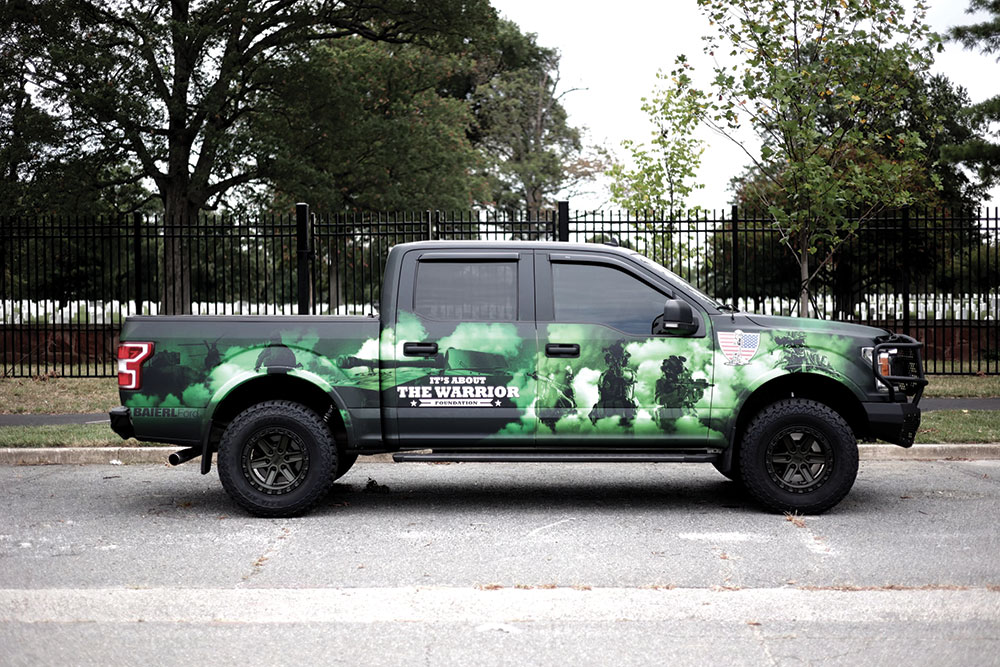 BAIERL FORD DONATED A TRUCK TO IT’S ABOUT THE WARRIOR. MONTELEONE SAYS IT HAS BECOME SORT OF LIKE THEIR MASCOT.

“I went to Stonewall and was golfing with my buddies … and I said, ‘What do you guys think? I was thinking of having a golf outing and [raising] as much money as we can and we’ll give it to local guys,’” Monteleone says.

The golf outing, which drew a huge number of participants and comprised about 40 teams, grew into the It’s About the Warrior Foundation the following year, in 2012. The nonprofit is designed to provide local veterans in Western Pennsylvania, Eastern Ohio and the panhandle of West Virginia with a range of services, including medical treatment, pain management, psychiatric care and outreach activities, all aimed at helping veterans know they’re not alone. It brings in between $400,000 and $500,000 annually, with around 72% going back to its veterans. The services, combined with outreach activities such as an intramural hockey team, are focused on addressing veterans’ mental and physical health — all for free. 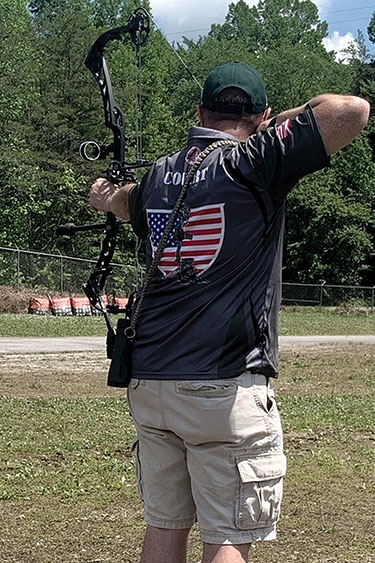 ARCHERY IS ONE OF THE FOUNDATION’S OUTREACH PROGRAMS. OTHERS INCLUDE GOLF AND THE PITTSBURGH WARTHOGS HOCKEY TEAM.

The physical health side is handled by Dr. Thomas Burnett, also a veteran of the Air Force. Dr. Burnett moved into an office in Wexford about four years ago and offered It’s About the Warrior a portion of the building without any overhead costs.

As a physiatrist, Dr. Burnett specializes in pain management and rehabilitation in his practice, Regeneration Pittsburgh. The goal of partnering with Burnett, who Monteleone says he has been friends with for a while, is to help veterans manage the lingering aches and pains from injuries sustained in combat. But he adds that many of the veterans are hurting in other ways — in ways that one can’t see.

Many of the foundation’s roughly 600 members are living with post-traumatic stress disorder (PTSD) and/or traumatic brain injuries, Monteleone says. His foundation provides access to psychiatric care through partnerships with local services, though he also makes himself available as a resource and guiding hand for veterans who may just need someone to lend an ear.

“When you go back to the mental health side of it, a lot of these guys are [struggling] bad. Like, bad,” he says. “But they know they can call me 24/7. The rewarding aspect is seeing guys that are depressed, angry, with anxiety, kind of backwards or shy come out of their shell. You see them healing, both mentally and physically, and they come up to you and say, ‘Hey man, thanks. You saved my life.’ And to me, at first I’m like, ‘Wait a minute, I didn’t do nothing.’ And they’re like, ‘Yes you did.’”

For Carl Wermter, this is a narrative he experienced firsthand. Wermter, originally from Kittanning, has been in the Army for 18½ years. He was deployed multiple times, and when he returned stateside after a tour in Iraq, he felt like he was missing the support network he had overseas. A friend encouraged him to join It’s About the Warrior’s hockey team in a game in Washington, D.C., and the impact, he says, has been profound.

“I was in a dark, dark place. I was really close to actually committing suicide,” he says. “Through the foundation, I’ve had the opportunity to reach out if I’m struggling. I know I’m not in it alone.”

A recurring theme of togetherness was echoed by other members.

“When you get out of the military, you kind of miss that camaraderie,” says Jeremy Almazan, who joined the Air Force on the same day as the Oklahoma City Bombing in 1995 and did a tour in Iraq from 2003 to 2004. He joined It’s About the Warrior about three years ago.

For Almazan, the foundation’s hockey team brought both a sense of fellowship and fun, rekindling remnants of the light-hearted and often jocular rapport that exists between people who are serving together.

“I do instant replay for the MLB and the NHL,” he says. “Sometimes, when I have to go out onto the field with all my gear, there’s a certain individual in our organization who likes to text me just to see my [Apple] watch blow up on screen, just to mess with me a little bit.

“There’s some guys on the team that have been seriously wounded, and being able to talk about it and make fun of each other brings that sense of unity back for them,” he says. 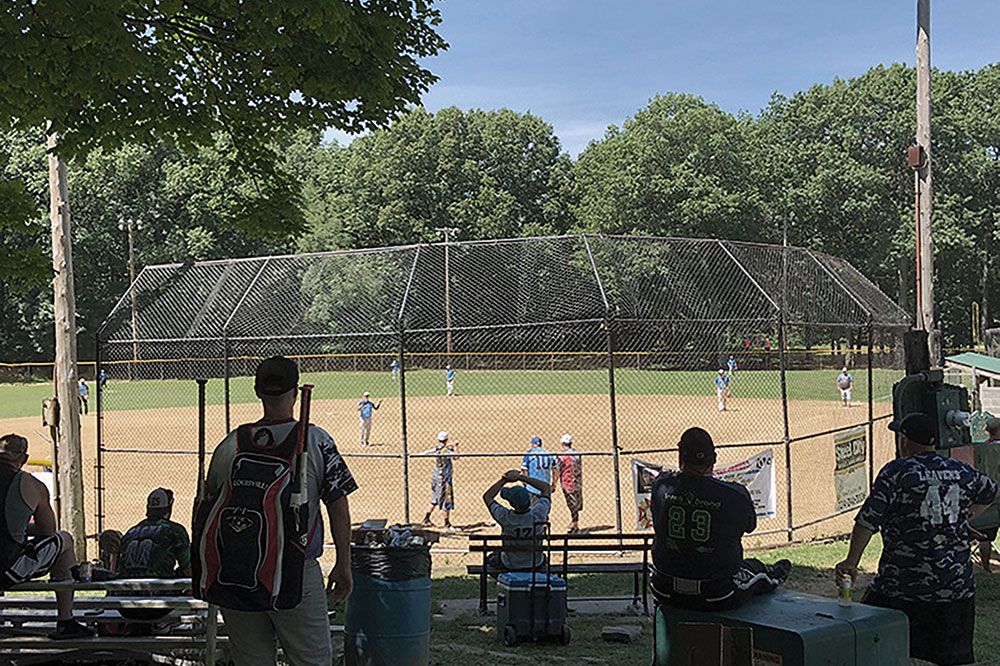 THE FOUNDATION HOSTS MANY SPORTS GAMES AIMED AT GETTING ITS MEMBERS TOGETHER.

Fred Settle was playing a pick-up game of hockey about four years ago at Hess Ice Rink in New Castle when another player noticed his camo jersey and asked him if he was a veteran. “We started talking and automatically we clicked, because that’s how it works,” says Settle, a New Castle native who joined the Army in the early 2000s. That veteran introduced Settle to It’s About the Warrior, and the rest is history. “I’m 100% in,” he says.

For Settle, the foundation has reignited a passion for service and given him the sense of community that he, too, felt he was missing since returning home.

“[Steve] puts in hours of work for us. I got a group of guys that I know, if I get a flat tire at 2 in the morning, I can send a text in the group and four guys are going to be on the way,” Settle says. “You don’t get that outside in the civilian world, and trying to explain that to a civilian — you can’t understand. It’s like your closest family member, but closer, and Steve has created this family for us.” 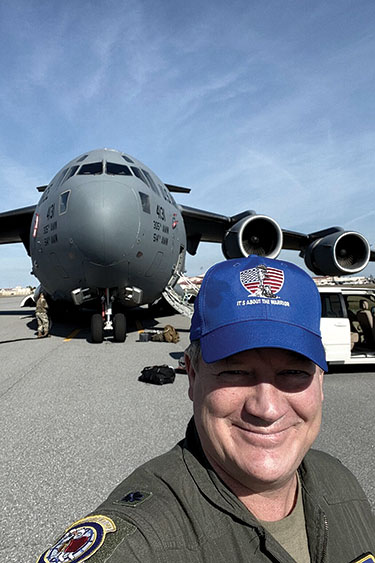 AN AIR FORCE PILOT WITH A C-17 AIRCRAFT

While Settle says he doesn’t struggle with PTSD to the same extent as some others, he understands the need for that closeness, and the way a lack of it can take its toll.

Camaraderie “is a piece of us. We’ve ingrained that and engraved that in our hearts,” he says. “So for us to not have a light shined on that portion of our heart, that’s where that dark part comes from.”

It’s About the Warrior’s impact on Settle has transcended the personal, rising into his professional life, too. He’s an insurance broker and started his own company that provides services mostly to other veterans and nonprofits. Watching the way Monteleone runs It’s About the Warrior has given Settle insight into the needs of other organizations that are run in similar ways.

“Learning how he runs a nonprofit, seeing what he and the board go through and hearing him talk about some things … I know that’s what my clients are probably facing,” Settle says. “He’s helping me in my professional life and not even knowing it, you know what I mean? I really can’t put it into words. I really, honestly can’t. It doesn’t do it justice.”

This article appears in the November 2021 issue of Pittsburgh Magazine.
Categories: Give Pgh