It's a Brave New World for Pittsburgh Public Theater

Marya Sea Kaminski comes to Pittsburgh Public Theater as the first woman to hold the role of artistic director — and she’s ready to start a party. 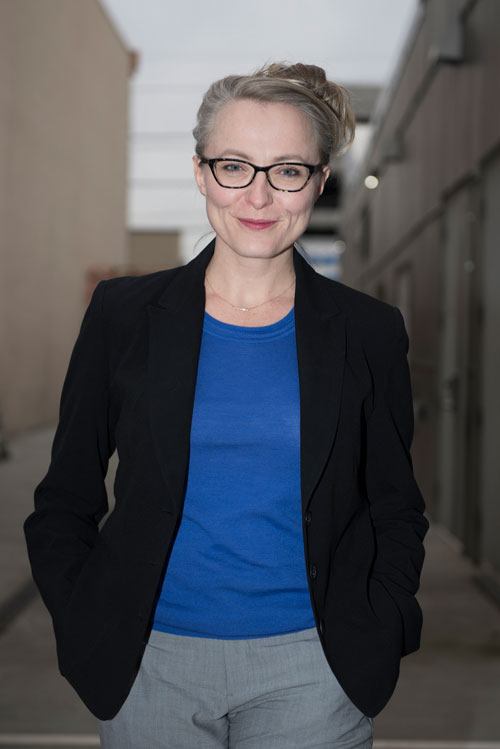 “Letting?” she says with a laugh when she hears the description, adding that she brought up having Pappas direct in her interview.

“Ted built this house [as we know it today],” she says. “All the beautiful things here, Ted built. [As he puts it], as we move forward, he’s going to be this dashing uncle.”

Pappas, who retired as Producing Artistic Director at the end of the 2017-18 season, led the theater for 18 seasons, the longest of any of the six directors in charge during the theater’s 44-year history. Kaminski, 41, is the first woman at the helm — her title is Artistic Director, and longtime Public Director of External Affairs Lou Castelli has been named Managing Director.

“Of course it’s an incredible honor — and it’s time, right?” Kaminski says of being the first woman. Especially given the fact the Public was founded by two women in 1974,

Joan Apt and Margaret Rieck, on the North Side, where Kaminski now lives. She sometimes walks to work, often passing by the Public’s first home, now the New Hazlett Theater, and says the significance is not lost on her.

“What I’m most excited about is being part of Pittsburgh Public but also the legacy of arts in Pittsburgh,” she says.

It’s a legacy she’s grown an appreciation for. The weekend before her interview, she saw “Equus” at the Public. When she came into town to pick up the keys to her new home, she took in “The Clearing” at Bricolage.

Courtney Horrigan, executive director of the Public’s Board of Trustees and a member of the search committee for a new director, says she and the committee were impressed when Kaminski told them she’d spent time exploring Pittsburgh before her interview, experiencing the Cultural District and talking to those in the community.

“Since we announced her appointment as artistic director, she’s come back several times and forged many connections,” says Horrigan.

Kaminski says she’s continually impressed with the caliber of work being done locally and the number of companies.

“She has said many of times she has a crush on the city and has talked about the similarities between Pittsburgh and Seattle,” Horrigan says.

Kaminski forged most of her career in Seattle after moving there for graduate school at the University of Washington. Her undergrad years were spent at the University of Pennsylvania, where she majored in English and theater arts, followed by a stint working at P.S. 122 in the East Village, where she says she had her mind blown by the performance art she was exposed to.

In her final year of grad school, she was assigned a project on how to found an ensemble theater company. She and her classmates were gifted with a theater space upon graduation, founding Washington Ensemble Theatre, now in its 15th year.

“The winds of fate blew favorably upon us,” she says smiling.

She ran the theater for five years, focusing on writing, performing and teaching, then worked at Seattle Rep for nearly four years.

She brings experience in writing, producing, acting, stage design, and, of course, directing to the Public, where the season kicks off this month with Kate Hamill’s adaptation of “Pride and Prejudice.”

“I am very excited by that,” Kaminski says. “I am trying to think about these shows as not simply great stories but great events. I think ‘Pride and Prejudice’ is going to start us with a bounce and a pretty good party.

“We’ve been joking, ‘Before there was Tinder, there was high tea.’ So we get to see these four women in ‘Pride and Prejudice’ basically trying to date, trying to match in a world that is insisting that they match… We’re basically throwing it like a party, and it asks some great questions in a really funny way.”

Also on tap is “Sweat,” the 2017 Pulitzer Prize winner, “The Tempest,” with an adaptation by Kaminski, who will also direct, followed by “A Doll’s House Part 2” (which Pappas will direct), “Indecent” and “Marjorie Prime.”

Kaminski’s interest in theater started long before college. She played Dorothy in a sixth grade production of “The Wizard of Oz” and continued to take to the stage growing up outside of Rochester, N.Y.

Even before that, her aunt took her to see “Charlotte’s Web.”

“I remember … just taking the full ride and just wanting to be a part of that, either as an audience, and, when I realized I could make it — that was pretty exciting. I think I’m still chasing that feeling.”