This creative groom hired a plane to do the asking for him. 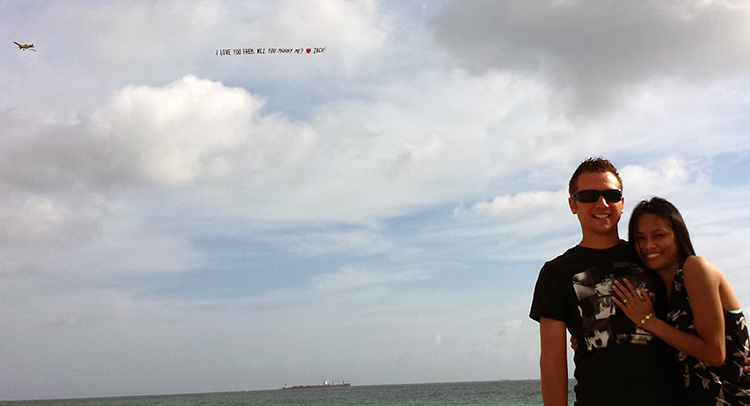 Zach Gallagher and Fremalyn Layco met while working as a deckhand and a stewardess, respectively, on separate yachts halfway across the world from Pittsburgh. They crossed paths again when Zach accepted a position aboard Fremalyn’s ship.

After romance blossomed and Fremalyn received a visa to leave her native Philippines and join Zach in Florida, where he was living at the time, he decided to ask for her hand in marriage with a grand gesture.

At first, Zach planned to greet her in the airport with flowers and a banner that read, “Welcome Frem, will you marry me?” Later, he decided he wanted to do something more elaborate.

While sitting on the beach, he saw a plane fly past, toting a banner saying “Advertise here.” That inspired his proposal to Fremalyn.

The day his proposal was set to fly across the sky, Zach and Fremalyn were running errands when the time approached for them to be on the beach. When they finally arrived, they’d taken about 10 steps down the beach when the plane flew by with “I love you Frem. Will you marry me?” flying behind it. 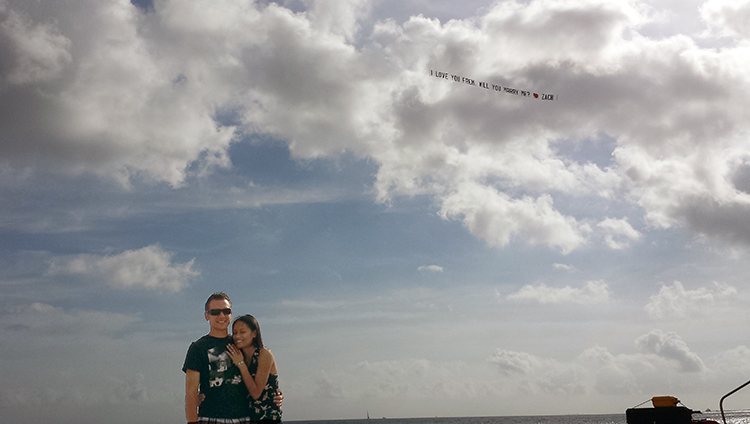 Zach, what kind of planning did you have to do to arrange the proposal?
It had to be done so many weeks in advance, whatever the requirements were by the agency. They sent me a bunch of forms to fill out asking what I would like on [the banner] with so many characters max, and when I would like it to fly with preferences in a two-hour window or specific time requirements. I was fairly open, because at the time she was arriving she wasn’t working, and I had taken off work, so our schedule was really open. We weren’t really stressed for time at all.

Did everything go as planned?
We were out running errands the one day, and [I was] really stressed because I knew in the back of my mind that I had to get her to the beach somehow, in order for the proposal . . . Down here, where we live in Florida, there’s train tracks that run parallel to the beach, and sure enough, we got the train going there, so we got held up even more. I’m just so frustrated. We get closer to the beach, and we just made the drawbridge . . . We made it just in time.

The other funny thing is, the pilot in the program that we set up [is] supposed to circle you. They’ll fly by once for kind of the shock-and-awe moment and then circle you about three times so you can get photos with the plane in the background. Somehow, somewhere, the location got messed up. He flew by us but just kept on going. We saw him way down in the distance, maybe a mile or so down the beach. He was circling down there . . . So then we had to set it up for another day, a week later, the following weekend, to go back out and redo the proposal and get photos.

It turns out to be really crappy outside, pouring down rain [with] high winds, so we had to cancel that. We had to schedule it for the next week and then finally that worked. I think it was a Sunday morning, and we went out early in the morning, got the photos, and it finally worked perfect. Third time is a charm, they say.

Why did you choose this way to propose?
I just like to be different and unique in the things I do, so I tried to think of the most unique proposal I could.

Click here for pictures and details from their Real Pittsburgh Wedding.