With its lush greenery, privacy and view of the water, Washington's Landing is resort-like living at its best.

With its lush greenery, privacy and view of the water, Washington’s Landing is resort-like living at its best.

There is a balcony off the third-floor bedroom suite of this chic townhouse at Washington’s Landing, but it couldn’t be more private. Fully covered by a gently sloping roof, it has walls on three sides, leaving just one side open to the elements. The view is dominated by the Allegheny River, which seems close enough to touch.

Two stories below, a sprawling wooden deck almost begs for a party. Just beyond the deck, a walking path along the river’s edge is lined by lush greenery. On a spring afternoon, the chirping of birds fills the air. You could easily believe, if you sat on that upstairs balcony with your morning coffee or on that downstairs deck with a pre-dinner glass of wine, that you were nestled in a sleepy boating town on the New England coast. 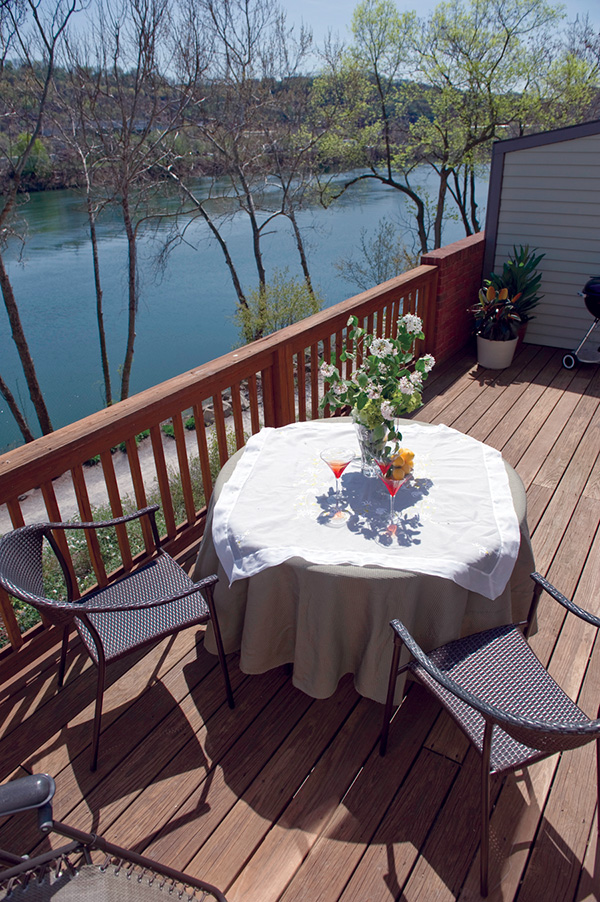 But step toward the railing and glance along the Allegheny River to your right. The gleaming office towers of downtown seem a stone’s throw away, a stunning contrast to the otherwise laid-back vibe. Look to your left, and the 31st Street Bridge arches over the water, a steel-and-concrete reminder that this is the City of Bridges.

Welcome to Washington’s Landing, a multi-use development that combines traditional architecture and a vacation vibe with a central city location.

Of course, this bit of land wasn’t always so scenic. Throughout the 1800s, back when it was known as Herr’s Island, it was home to stockyards, rendering plants and factories. When those businesses eventually left, a brownfield site remained—too tainted to be habitable. Throughout the ’60s, ’70s and ’80s, plans for reclaiming the island were repeatedly formed and then abandoned. Eventually the project came together, and the island was reborn. It’s a modern success story with a nod to history—in 1987, the island was renamed Washington’s Landing because George Washington is believed to have slept there in 1753 after his raft capsized in the river. Nearly 250 years later in the 1990s, Montgomery & Rust began building the townhouse community.

The area now includes things Gen. Washington wouldn’t have imagined: not just homes and office space, but tennis courts, a full-service marina, Redfin Blues restaurant and Three Rivers Rowing, which rents boats and kayaks for a lazy afternoon—or a serious workout—on the river.

Pittsburgh is a study in contrasts, which might explain why visitors are so often surprised by it. In many other American cities, residents must choose either the convenience of an urban environment or the peace of a lush, green one. In Pittsburgh, you can have speedy access to both if your location is as strategic as this.

When you enter the Washington’s Landing complex, it feels as though you’re off the beaten path. And yet it’s almost literally on busy Route 28, close to the vibrant energy of the Strip District and Lawrenceville, and just a short drive to the mellow horse farms of the North Hills.

Of course, this sweet location isn’t inexpensive. Condo townhomes here are selling in the half-million-dollar range, especially if the owners have invested in upgrades like granite countertops and stained-glass windows.

In addition to the killer view and über-private third-floor balcony, this particular three-bedroom, 2 1/2 bath unit has sleek cherrywood floors, a gas fireplace, a custom steam shower and a jet-spray tub. A custom-made billiards table in the downstairs game room completes the picture. For those keeping score, maintenance fees for this condo unit are $240 per month, and taxes are just more than $7,000 annually.

The owner, a native Pittsburgher, splits his time between here and California. Because his career increasingly keeps him on the West Coast, he decided to put the home up for sale. But he’s been savoring afternoons overlooking the Allegheny, enjoying the sunshine and city views. Saying goodbye to this home—and its to-die-for location—will no doubt be bittersweet.

This article appears in the June 2010 issue of Pittsburgh Magazine.