Is Pitt Ready for the ACC?

With the football powerhouses of the ACC coming to town, are the Pitt Panthers ready for their new opponents? 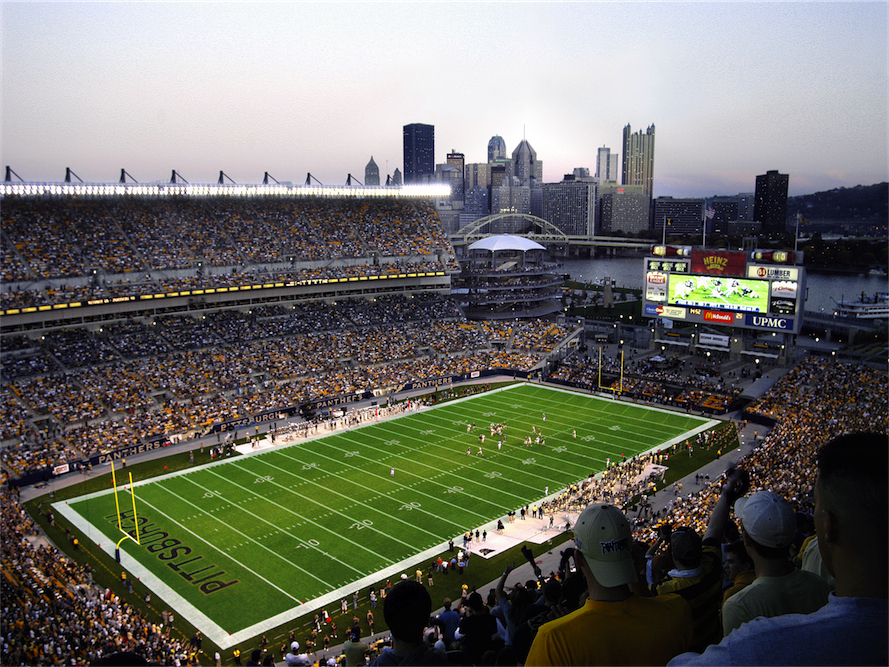 The coming attractions on Pitt’s home football schedule are an easy sell. With the Panthers joining the Atlantic Coast Conference this season, the marquee matchups include Florida State, Virginia, Notre Dame, North Carolina and Miami. Does marketing the opposition, as the university has on billboards and other campaigns, mean that Pitt lacks the grit to be its own selling point?

Not at all, say the university officials ushering in this bold new era of Pitt football.

“We are not selling or positioning ourselves so that we want our fans to watch Florida State. The other programs are coming to play Pittsburgh,” says Chris Ferris, Pitt’s associate athletic director in charge of ticketing and marketing.

“As excited as we are to join the ACC, we’ve been hearing from each and every conference team how thrilled they are to be partnered with Pitt. It’s great for the university, the city and the region to look forward to big-time, high-quality [college] football. We’re going to do everything we can to make this fun for the city, to make Saturdays as electric as Sundays. We’re going to work very hard to represent our institution and our city.”

Actually, that electricity begins not on a Saturday but on Monday night, Sept. 2. Florida State visits Heinz Field for a nationally televised Labor Day special to kick off arguably the most unique campaign since Pitt began playing football in 1890.

The Florida State Seminoles are coming off a 12-2 season that culminated with a victory over Northern Illinois in the Orange Bowl. Pitt, on the other hand, was 6-7 a year ago; the Panthers lost by 21 points to Mississippi in the BBVA Compass Bowl. During the off-season, prized running back Rushel Shell, a local legend at Hopewell High School, opted out after his freshman year. Three juniors were booted from the team following a drug bust in April — tight end Drew Carswell, safety Eric Williams and defensive lineman Khaynin Mosley-Smith.

“The best players want to play the best competition, to play against top-flight opponents every single week. They want to be challenged to be the very best and to win championships.” – Pitt Athletic Director, Steve Pederson

The jump from the Big East Conference to the ACC will have its challenges without a feature running back and with a new quarterback to replace three-year starter Tino Sunseri, says Ralph Cindrich, the former Pitt and NFL linebacker and current Pittsburgh-based sports agent.

“We’ll all see some good football,” Cindrich adds. “But it will be asking an awful lot [of the Panthers] to be competitive immediately. It seems like a daunting task, especially the first couple of years. You’re talking about playing programs that go all out to win.”

While Pitt hasn’t won a national championship or boasted an undefeated team since 1976, the Panthers claim nine national titles in their proud history. Pitt is ranked among the top 20 winningest programs of all time. Its storied list of coaches goes back to Pop Warner and Jock Sutherland.

In sharp contrast to those facts: For two years running, no Pitt player has been drafted by an NFL team. But Pitt has more alums in the Pro Football Hall of Fame — including the likes of Mike Ditka, Tony Dorsett and Dan Marino — than any school except the University of Southern California, Notre Dame, Ohio State and, Pitt's tie, Michigan.

“We’ve spent a lot of years putting the pieces in place. There couldn’t be a better fit for us than the ACC,” says Athletic Director Steve Pederson. “Not only have we been welcomed, we’ve been energized. It’s a big deal for our colleagues to come in here. They’re excited about what we bring.

The college football landscape has changed dramatically in recent years, as established programs have abandoned traditional rivalries to join realigned conferences. The Backyard Brawl between Pitt and West Virginia is a casualty of those teams joining separate leagues, but the Pitt-Penn State rivalry, suspended since 2000, will begin anew in 2016.

More meaningful: The ACC is one of the five power conferences in college football. The league has its own style of play, with an emphasis on speed and skill over brute strength. But those are the general trends in how college football is being played.

Joining the ACC does mean stability in scheduling. Year in and year out, Pitt will know what teams will be at the core of its schedule.

Because of TV exposure and the prestige of the ACC, Pitt expects to broaden its recruiting base to attract the kinds of athletes it wants.

“We’ve got a lot of work to do,” says Paul Chryst, entering his second season as head coach after several years of a coaching carousel at the university. “There are adjustments. But the bottom line is you recruit the best players you can to fit the University of Pittsburgh and play to your strengths. You still have to be true to who you are.

“We’re a university that offers a world-class education in a great city and has a rich football history that has found a home in a great conference. But the No. 1 point for us is that Pitt sells Pitt.”

Pitt football may not be where the alumni and the fan base want it to be in terms of getting back to elite status, but those in charge of the athletic department liken the moment to the way basketball coach Jamie Dixon solidified the Panthers as a basketball power in the Big East Conference.

“When we send out renewals for basketball packages, fans don’t know who we’re playing yet. They’re coming to see us. That’s where we want to be with football,” Pederson says. “The best players want to play the best competition, to play against top-flight opponents every single week. They want to be challenged to be the very best and to win championships.”

“Our best days are ahead. We’ve worked hard to position ourselves. I think we’re going to create some exciting times here in the years ahead.”

Starting with the inaugural game in the ACC.

This article appears in the August 2013 issue of Pittsburgh Magazine.
Categories: From the Magazine, Sports